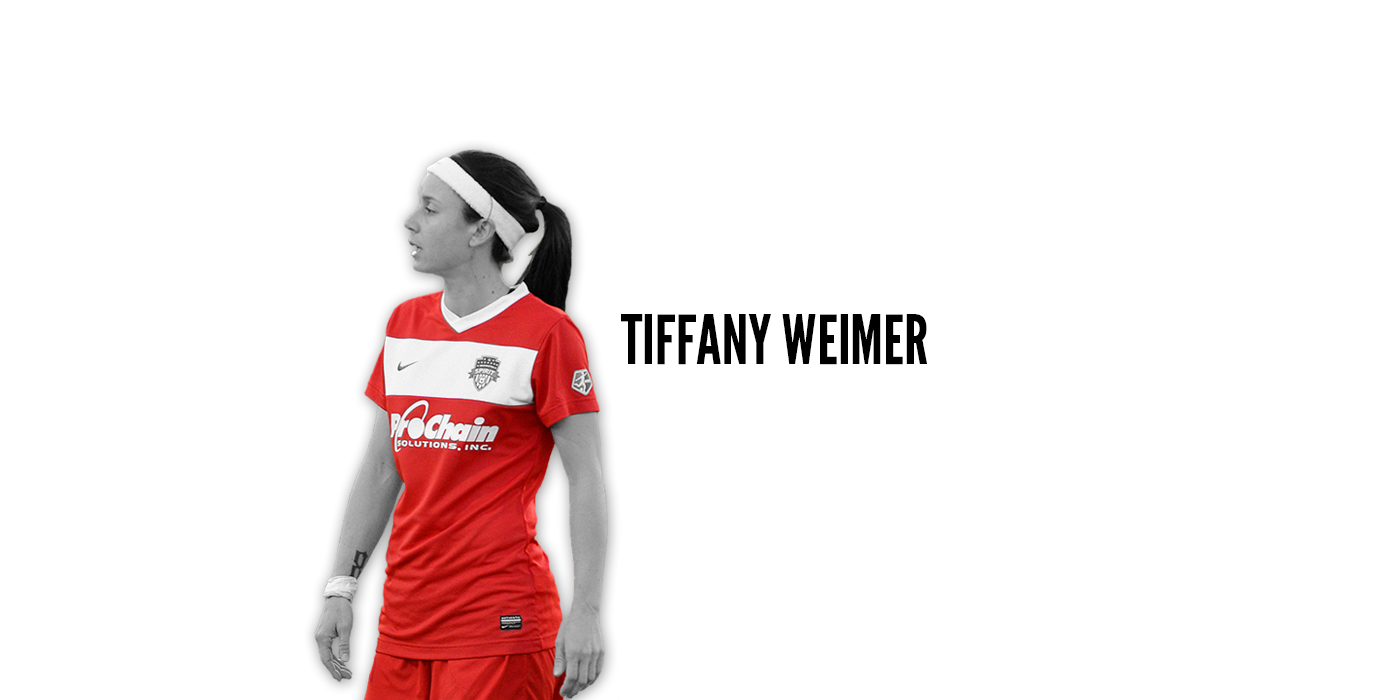 [/column][dropcap size=small]W[/dropcap]hile most NWSL players spent the first few months of 2013 individually preparing for, then going through the rigors of tryouts and preseason with their teams, Tiffany Weimer was on the pitch with Fortuna Hjørring in Denmark’s Elitedivisionen and the UEFA Women’s Champions League tournament. Weimer had been splitting time between North American and European soccer seasons since 2010. After winning the inaugural NWSL Championship with Portland Thorns FC, she opted not to return to Europe in 2013/14, instead taking a rare break between seasons. In January, Weimer was traded from the Portland Thorns to the Washington Spirit during the 2014 NWSL College Draft.

Our Game Magazine caught up with Weimer in March to talk about her first NWSL preseason, the overseas experience, and of course, how 2014 is shaping up for Washington Spirit after the struggles of 2013.

Regarding the 2013/14 NWSL offseason months:

I haven’t had many true offseasons in my life. Although I thought it was really long, I was able to really focus on my training and get my fitness up to where it should be, and then I was able to put in a lot of time coaching. I was heavily involved in coaching the Under-15 and Under-16 girlsCAN Football Academy Teams.

On the coaching experience:

It’s interesting to tell players to work on things that you need to work on yourself and sharing the attitude that you’re going to go out in the middle of winter when there’s snow on the field and just get the work done. Telling somebody else that, it helps your mentality—that you just have to suck it up and do your work too, otherwise you have no place to say that to someone else.

It’s so much better to be there from the start. I think anybody could agree that it’s difficult to come to a team midseason. A lot is already established and people take three or four months to get their footing. To get comfortable with the environment, the players, the coaches, and the staff and everything has been much easier this year because everybody is going through it at the same time. You’re not alone trying to navigate your way through this new experience.

On reconnecting with players that she’s played with before:

I felt more comfortable going into Portland because I was [familiar with more of the players]. It’s funny because it doesn’t matter, really. [The Spirit players] are playing like we’ve already played together for months. The system that [Head Coach Mark Parsons] has us playing in — he basically put us all on the same page on Day One. Ever since then, we’ve all been working toward the same goal and it makes it very easy to click with players that you’ve never played with before. We have a style on attack and on defense. It’s a style that suits the roster and a system with a lot of freedom.

On three “generations” of Penn State players represented on the Spirit roster:

WE ARE… the best. I mean, it’s great to play with Ali [Krieger] again. It felt very comfortable, right off the bat, when we played together against UNC. I have been playing with [Christine] Nairn in the midfield for the past couple of weeks and we have just been bleeding navy blue. I mean, we have played well together and it’s fun to have fellow Nittany Lions on the team.

Giving up the No. 8 jersey:

Diana Matheson deserves it. It’s hers.  But if she was willing to give it up, I wouldn’t say no. Maybe if she wants to let me wear it for one game or something.

What she perceives as her role with the Washington Spirit:

It’s hard to say right now. There aren’t any set positions or starting lineup yet. We’re trying to see what works best and who works best where with whom. We have the luxury of a month of experimenting in order to find that, so I feel like right now, I’m involved in the experiment and trying to do my best. It’s hard to say because of the timing. A player can start every game of preseason but come Western New York [first game of the season for DC], Parsons might not want that.

So all I can do is do what I’m good at. I have a lot of experience –I’m one of the more experienced players on the team, so I can help. There are no egos on this team. Everybody is equal. Anybody could play at any time. Anybody can play and start in several different positions. When you have that mentality, it’s constantly pushing people, and you also have that sense that, “Yeah, I’m gonna play at some point.”  Everyone’s going to get their chance this year.

Team culture with the Washington Spirit:

When you miss out on preseason, you miss out on a lot of those bonding moments that happen in the beginning of the year. Now I’m a part of that, and I feel like I’m helping build it from the start. I didn’t have that opportunity in the past. You gain respect from your teammates.

The DC culture is definitely something special. I was doing fitness today — we were pushing a heavy sled — I felt like I was going to puke, and in the past I would have stopped. But there’s something about this group that you don’t want to stop. It has nothing to do with you. You do it for your teammates. You have people encouraging you and that want you to do well. That’s not always the case on every team. You can just feel that they want you to get better — that they want you to do it to get better. I thought that was really cool.

Mark [Parsons] did a great job of bringing in high quality people that love the game, that want to be here and that are professional.

I think it’s just going to be cool to do better than [the Spirit] did last year against any of the teams. Obviously DC struggled and started to put it together toward the end of the season, so I think it will be something special to have a good season from the start and be a competitor no matter who we’re playing against — even if we’re playing against the champion from last season or Western New York or Kansas City.

We’re still in the beginning stages, but seeing this team coming together on and off the field, I’m looking forward to that because I really think that if things come together like it seems they’re going to, the results will follow. Obviously, it’s a business and we want to win, but at the same time, if we do the things we’re supposed to do and we play soccer the way it’s supposed to be played, those things just kind of happen on their own.

In the past [on US-based teams], we didn’t always focus on tactics. So it’s been refreshing to focus on tactics [this preseason] because when I was overseas, we did that quite a bit. In that sense, I think that’s a big level of professionalism, because those are the details. But otherwise, I don’t think there is that much of a difference [in team environments].

In Europe, you don’t think your team or league is going to fold at any minute. You couldn’t just get cut in the middle of the season. In the US, there is no guarantee you’re going to be on the team the whole season or that you’re going to have a job the whole year. When you go to Europe, there’s a lot of security when you sign for a team, and I think that’s important to a professional. You’re not going to get traded if you go to a team in Europe, and you’re not going to get cut. In the US, you are in front of your home fans, and you get to enjoy your own culture. It’s more comfortable sometimes.

There’s give and take for each place you go to play. You’re rarely going to find a place that’s perfect.

How she stays positive and focused as a professional when things aren’t going the ways she’d like (such as injuries, lack of playing time, loss of confidence, and so on):

I’ve learned a lot about myself in the last two years. One of the things I’ve learned is it’s easier to accept your fate — whatever the coaches’ decisions are, or injuries — when you know that you can’t control them. You accept that. I’ve also learned that if I’m getting better, then I’m pretty happy. If I feel like I’m challenged and improving and growing as a person and a player and enjoying it — those are the only things I feel like matter. Come gameday, I can’t control what the coaches want or what the game needs. All I can do is what I do in practice every day. And I enjoy going to practice. I love it. In the past, on other teams, I’ve heard people say going to practice is like going to a job. I don’t know if it’s a maturity thing, or an appreciation thing, or just an unconditional love for the game, but I love going to training every day… even the worst days are never that bad. If you can’t bring yourself to go out there and literally do what you love, then… I don’t know why people do it. It’s really easy to say “I do what I love,” but it’s another thing to actually do what you love and love what you do.

You’re never too old to recreate yourself or your image. I feel better now than I’ve ever felt as a player. It took a long time to build my confidence back up because the first two years I played in WPS, I did not do too well and I didn’t feel like I could ever recover from that. But I went to Europe for a few years and really found myself as a person and as a player. I just kept plugging away. It took a long time — I’m 30 now — but I feel like I have a lot to contribute to this team on and off the field.

I feel like in a lot of ways — in soccer and in life and in sports — people undervalue their experiences. It’s always nice to have everything handed to us in life, but how do we grow that way? I haven’t had the easiest path, but I have had a fulfilling one.

I’ve learned more about myself this way than I would have that way because I would have just had everything handed to me. If you look at adversity as something that’s going to make you better — it’s not always easy. I didn’t always have the easiest time, but I wish somebody had told me that it was going to make me better. I’m mentally stronger now than I’ve ever been. This preseason, I just went out and did my workouts and I didn’t think about it or complain — just went out and did it. Yeah, maybe it took until I was thirty to be mentally tougher, but it’s better than never being mentally tough.