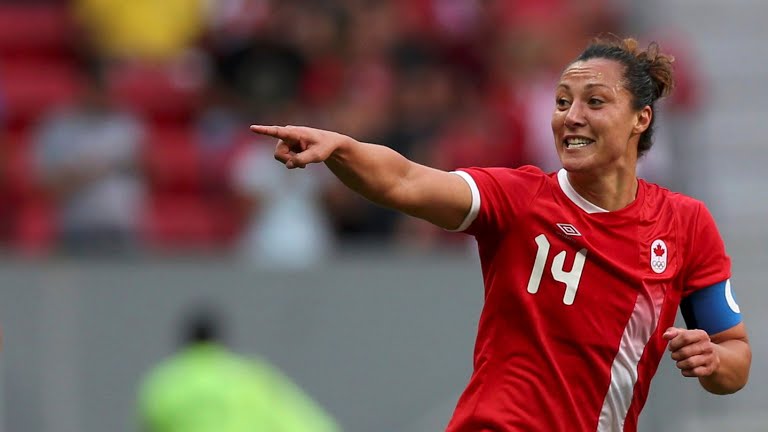 In a match that raised the heart beats of those watching as well as a couple of teams competing in the Olympic women’s soccer tournament, Canada came from behind to defeat Germany, 2-1, on Tuesday in Brasilia. Canada took top honors in Group F by winning all three of their group matches. It was Canada’s first win over Germany in 13 meetings.

Both teams’ starting XIs featured changes as each side was dealing with injuries, suspensions due to card accumulations, and fatigue with the quick turnaround and travel from the prior match days. Germany took a 1-0 lead in the 13th minute when Canadian defender Allysha Chapman committed a foul inside the box and Melanie Behringer coolly slotted home the penalty.

Some loose possession in the backline 10 minutes later came back to hurt Germany as Desiree Scott applied high pressure and deflected a poor pass in the direction of Melissa Tancredi. After slipping by a couple of defenders, Melissa Tancredi ripped a low, left-footed effort into the far corner for the equalizer.

The plot twist was in full effect in the 60th minute when Canadian defender Rebecca Quinn sent a long free kick into the box and Tancredi rose to slot a header past Germany’s Almuth Schult for her second of the day and a 2-1 lead.

Combining that score with the other Group F match, in which Australia led Zimbabwe 6-0 on the hour mark, Germany was in real danger of falling into third place in the group. Head coach Silvia Neid brought in Alexandra Popp and Melanie Leupolz midway through the second half in search of a second goal but it didn’t come.

Germany came close in the 88th minute when Anja Mittag’s curling effort was pushed wide by Canada’s Stephanie Labbé. In the 90th minute, Josée Bélanger cleared a corner kick off the line to deny Germany an equalizer.

Because Zimbabwe scored late in the other Group F match, Germany finished group play in second place ahead of Australia on goal difference.

Canada came to this tournament to play, plain and simple. All 18 players contributed to their three wins and they showed good technical soccer along with attacking flair. Meanwhile, Germany has yet to recover as a team after  Simone Laudehr’s injury in their first match. In addition, goal scoring has been by committee and when the defense has slipped, it’s been costly. The Germans will need to make adjustments and hope Laudehr can be cleared to play before their quarterfinal match

Canada, as winners of Group F, will travel to São Paulo to take on France, the second-place finisher in Group G on Friday, August 12. Meanwhile, by virtue of finishing second in the group, Germany will travel to Salvador to face China PR, also on Friday.