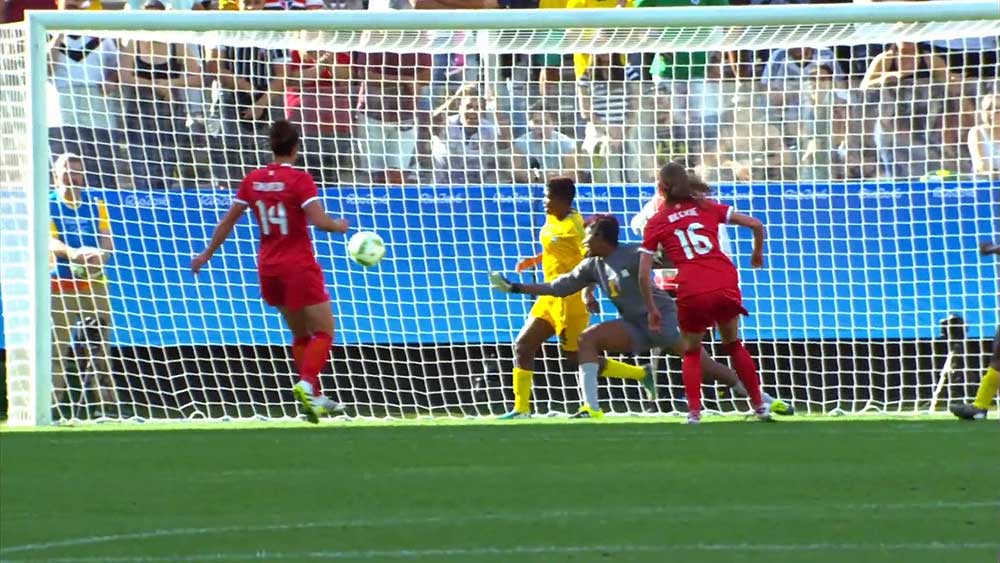 Canada Headed to Quarterfinals after 3-1 Win over Zimbabwe

Janine Beckie had a brace in Canada’s 3-1 win over Zimbabwe in São Paulo, Brazil on Saturday. The two goals brought Beckie’s total to three goals so far in the tournament. With the win, Canada is in charge of Group F with two wins (6 points) and a +4 goal differential.

Beckie opened the scoring for Canada, as she did in the opening group-stage win over Australia, slotting home the rebound from her initial shot that was saved by Zimbabwean goalkeeper Chido Dzingirai in the 7th minute.

Canada possession and pressure paid off in the 18th minute after Diana Matheson was brought down by Dzingirai in the box. Christine Sinclair converted the penalty to double the lead.

Beckie’s second of the game came in the 35th minute and capped off a half in which Canada firmly controlled. Bélanger’s cross from the right found an unmarked Beckie, who one-timed it past the keeper.

Beckie with the good… pic.twitter.com/aMPdSdpluK

Canada’s second half wasn’t as focused and Zimbabwe did well to keep Canada from adding to its tally. While Zadorsky will be back in the center of the defensive line for Canada’s final group-stage match against Germany, Kadeisha Buchanan will not. Buchanan picked up a yellow card in the 59th minute and will miss the match due to yellow card accumulation.

Zimbabwe pulled one back in the 68th minute when Mavis Chirandu got on the end Marjory Nyaumwe’s chip over an out-of-her-box D’Angelo and found the back of an open net.

On Tuesday, August 9, Canada faces Germany, which came from 0-2 down to draw Australia, while Zimbabwe’s last match of the tournament will be against an Australian team looking to score goals in the hopes of advancing out of the group.