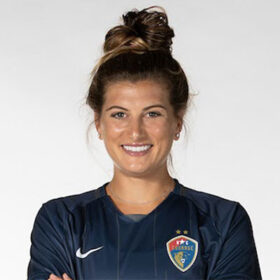 Cari Roccaro
JoinedMay 24, 2021
Articles1
Cari Roccaro is a defender/midfielder and two-time NWSL Champion with the North Carolina Courage. She is a creator and cohost for Butterfly Road, a podcast that candidly discusses mental health in athletics. Roccaro graduated with a bachelor's degree in sociology from the University of Notre Dame in 2016. The Houston Dash selected her with the 5th overall pick in the 2016 NWSL Draft. Roccaro was a part of the U-20 U.S. Women's National Team team that won the 2012 U-20 World Cup in Japan, and was captain of the U-20 U.S. WNT that competed in the 2014 U-20 World Cup in Canada. When Roccaro isn’t playing soccer or working on Butterfly Road, she is most likely relaxing with her friends by the pool, binge watching Friends, or enjoying her time running, journaling, or baking. Roccaro is on Twitter and Instagram. Nothing but Pure Joy

Defender Cari Roccaro of the North Carolina Courage provides insight on how she learned — and continues to learn — how to maximize fulfillment as a soccer player, especially through the low moments.

Cari Roccaro
In InsightNorth Carolina CourageNWSL
on May 13, 20218 min read