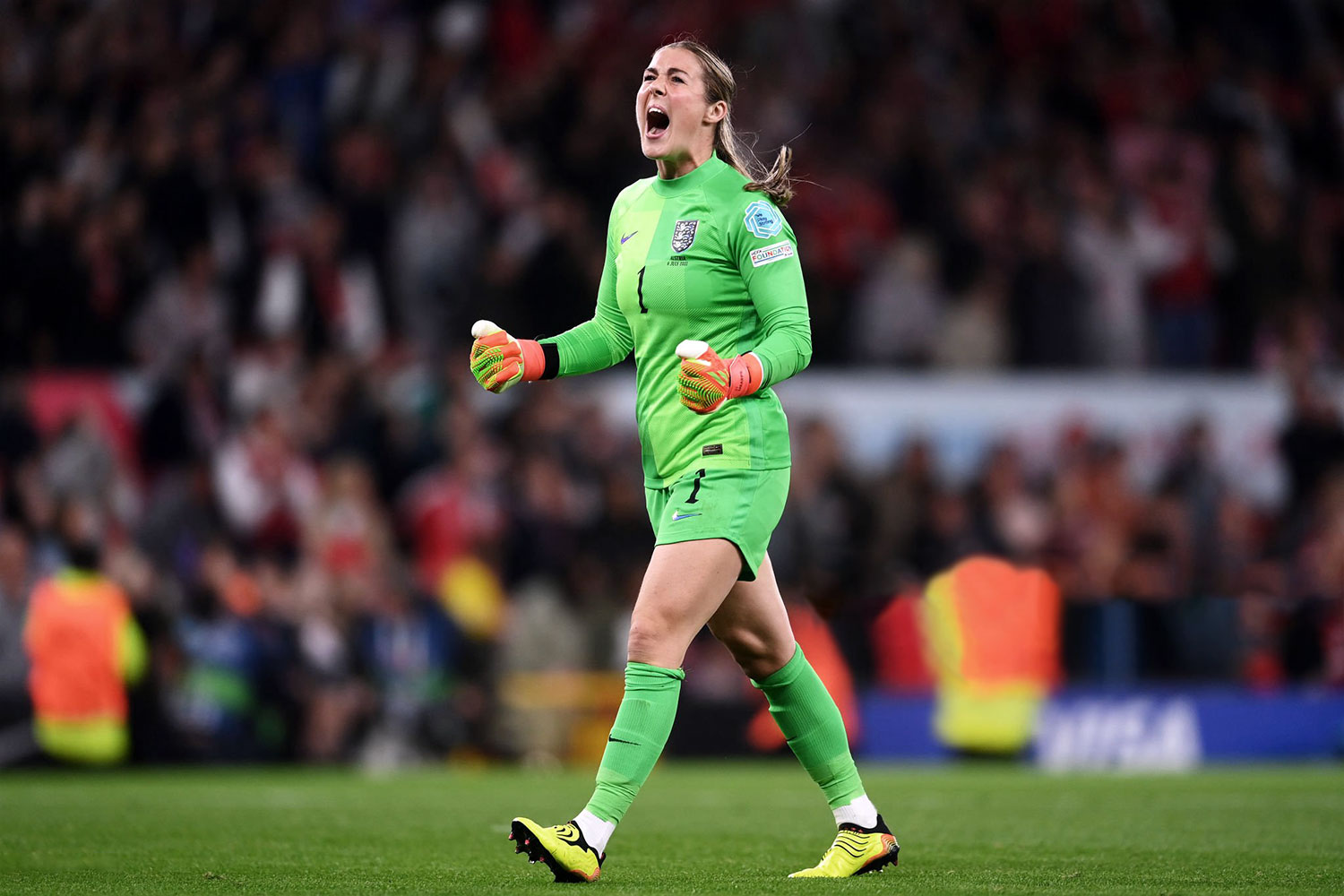 Mary Earps is Loving Life as England’s Number One

“Whether it’s 22 seconds, 22 minutes, or 22 years into a game, I just always want to be on my best game,” said Mary Earps, immediately after her excellent performance against Sweden to help England to the Euro 2022 final.

The Manchester United number one had to be alert inside 30 seconds to push away an effort from Stina Blackstenius, as she did again in the second half to brilliantly push over the crossbar another effort from the Arsenal forward.

In an overall team performance of several individual standouts, Earps was right up there with the best of them, and she’s loving her football ahead of the biggest game of her career in the final against Germany on Sunday.

“I’m absolutely loving playing for this team,” said Earps. “It’s an absolute privilege. I love playing at this level, it’s such a fantastic feeling. I feel the team have been amazing and I’m just so proud I can be a part of it.

“I want to help the team in any way that I can and whatever way I’m needed. Hopefully, I’m never needed in a game because that means the girls are doing unbelievably well in front of me, but when I am needed I want to be there and I want to give my absolute all.”

Most goalkeepers don’t expect to be called into action like Earps was after just 22 seconds of the semifinal, but admitted she is always working on the training pitch to be prepared for every eventuality.

It wasn’t just the first save that proved important either. With England leading 2–0, Earps stretched to push over an unorthodox effort from Blackstenius heading for the corner and would have made for a nervy final half an hour.

“They [Bright and Daly] tapped my head so hard, I’m surprised I’ve got any brain cells left after that. My mum and dad will say that I’ve never had any in the first place.

“They said some really nice things and that just means the world to me, to have my teammates say such amazing things. I just want to help the team, I want to help them. I want to be the best I can be for them.”

With the lead secured, what followed was an audacious backheel goal from United teammate Alessia Russo that secured England’s spot in the final.

Asked what Earps would do in training if Russo tried the same on her, she joked: “I’m never surprised by Alessia Russo’s antics! What a player, what a player. Fortunately, I’m on her team and she’s a phenomenal player. She deserves everything she gets.”

When asked if there was a bit of Manchester United compatriot David de Gea in her reflex saves on show at Bramall Lane, Earps joked she will “take that comparison, no problem at all,” but went on to admit he had messaged her after the game and that she tries to take everything she can from watching games on TV to continue improving as a goalkeeper.

“Me and David speak a little bit. He’s just messaged me saying congratulations. We message back and forth about results and clean sheets and stuff, so that’s always nice to have his support.

“To be honest with you, I just love football and I watch as much football as I can. I watch a lot of the Premier League and I watch goalkeepers all over the world. I think it’s really important as a goalkeeper that you develop your own style because not everything works.

“You might see something on TV, but it may or may not work for you, everyone’s built differently, we have different strengths. I think it’s just about trying to give your all, work towards your strengths, and put in your best performance every week.”

While Earps and England have now reached a first major final since 2009, breaking the curse of three consecutive semifinal defeats, the message from the squad since Tuesday night has been a resounding “the job isn’t done yet,” and Earps remained on brand ahead of Sunday’s crunch clash with Germany in a repeat of that 2009 final.

“Of course not. One game to go. We’ve put ourselves in this position, we’ve earned the right to be in the final. We’ve worked really hard together and we’ve got a really good group. We’ve got another game, it’s not done yet but so, so happy we’ve made it to the final.