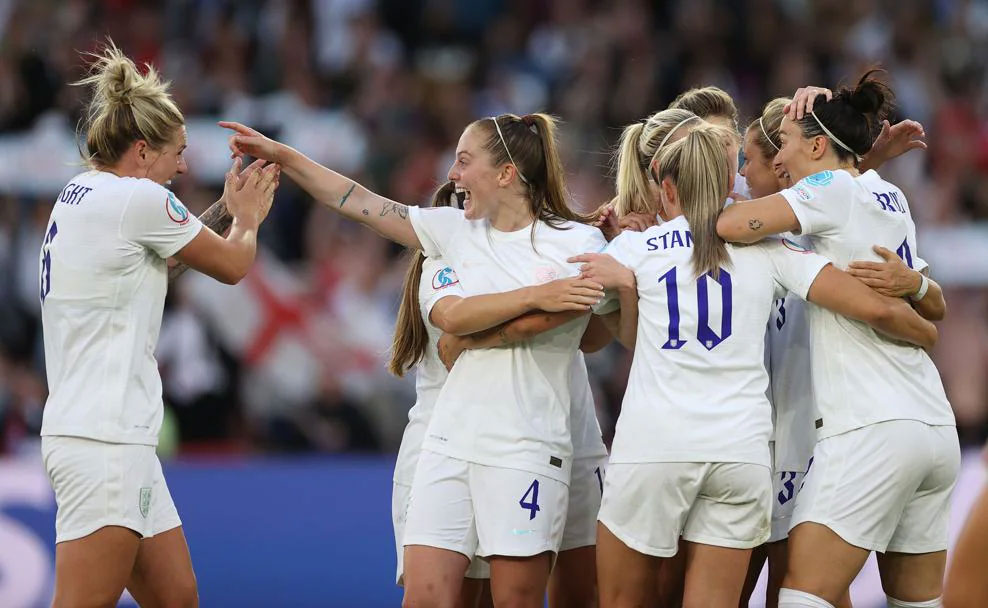 This is where it all goes wrong, right?

This is where it always goes wrong.

This, though, is an England team that doesn’t just refuse the read the script, it rips it up and throws it back in our faces. This is an England team unscarred and untouched by the past, with a head coach who forgets yesterday existed as soon the clock strikes midnight.

So make that four semifinals, three heartbreaks, one hell of a party.

Wembley, here they come. It hasn’t yet come “home,” it may not come home, maybe we’re just postponing the heartbreak this time around, maybe we’re just English. But on Tuesday night in front of a rowdy Sheff crowd, England took their biggest step in a generation, reaching a major final for the first time since 2009.

It was somewhat apt it was Beth Mead, England’s goal-scoring star of the tournament, and Lucy Bronze, so often the one to find a big goal in big games over the years, that put the Lionesses on their way, before super sub Alessia Russo kept being a super sub and Fran Kirby added some icing on top of the pretty sweet tasting cake.

From the off, however, it was far from plain sailing. England started slow, as they often have in the tournament, but a combination of below-par Sweden finishing and Mary Earps kept the visitors at bay, with the first chance coming after just 20 seconds.

Sweden knew their plan and they stuck to it, hitting England on the counter at every opportunity. Even when goalkeeper Hedvig Lindahl had the ball, she launched it forward as soon as she could.

Kosovare Asllani was running things in the middle and just when England needed someone to step up, it was tournament top scorer Mead who did the honors, smashing home Lucy Bronze’s low cross into the box to send Bramall Lane into raptures.

After that, things settled, England started to gain confidence, and just as Sweden would have been resetting and getting ready for a big second half, Bronze obliged with what was an unorthodox header into the far corner past Lindahl.

Most things seem to be going England’s way this tournament, as Bronze herself alluded to during the week. No injuries, a couple of COVID-19 cases to squad players at worst, and that was mirrored on the pitch as the Lionesses once again rode their luck at times, but came out on top.

Earps again came up big in the second half to deny Blackstenius as the Swedes rallied, but things were put to bed when Alessia Russo had the barefaced cheek to say thank you to Hedvig Lindahl for denying her a goal by promptly backheeling the ball through Lindahl’s legs in what can only be described as a “this is happening” moment.

Just as the traditional rendition of “It’s Coming Home” began, Kirby lobbed former teammate Lindahl, who couldn’t do enough to keep it out of the back of the net, and England hit their 20th goal of the tournament.

Maybe in the past it would have been different, maybe the saves would have been goals, but they have now gone further than any other Lionesses side in more than a decade, and will face either France or eight-time champions Germany at Wembley on Sunday.

Thanks to Mead, Bronze, Russo, and Kirby it will be silver or gold for England this time around.