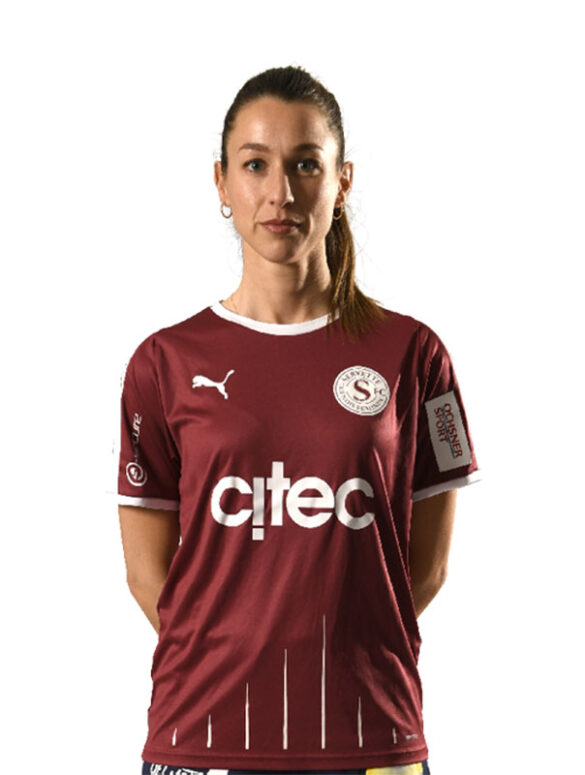 When Servette FC Chênois walks out against last season’s UEFA Champions League finalists and current Barclays FA Women’s Super League champions Chelsea on Tuesday night, it will be a brand-new experience for most of the squad despite their status as champions of Switzerland.

The club’s rise has been a rapid one. Only promoted to the top division of the Swiss Women’s Super League in 2018 after a merger between Servette and the previous Chênois club, they finished fourth in their first season before ending the next campaign top of the league when the COVID-19 pandemic saw the season cancelled early.

Servette wasn’t awarded the title but did qualify for the Champions League where they were knocked out with ease by Atlético Madrid at the first hurdle last season, but this year’s group stage has offered up at least six games against tough opposition, with Wolfsburg and Juventus joining Chelsea in Servette’s group.

Striker Alyssa Lagonia is one of the most experienced players in the group, a former Canada international who joined in 2019, and the 32-year-old from Ontario believes the new format is something for her side to embrace rather than fear.

“It’s definitely an opportunity,” she said. “The fact the format has changed, we have this opportunity and the first [Swiss team] to compete it in. It’s a learning experience for sure, we’re the underdogs and nobody expects us to come out on top, but we have expectations for ourselves and we certainly want to learn and grow from these experiences and to be able to play these teams could be once in a lifetime for us.”

Servette lost 0–3 at home to Juventus in their first game and followed that up with a 0–5 defeat at former champions Wolfsburg and Emma Hayes’s Chelsea side will potentially be their toughest test yet as they prepare to come up against renowned world superstars such as Sam Kerr and Pernille Harder.

“The fact we did draw these teams is a good thing,” said Lagonia. “We wanted that, we wanted to play the biggest teams and after the first two games we’ve realized we need a very professional environment to compete with these teams.

“It just shows what we still need to do and where we need to be if we want to grow the sport in Switzerland and it shows us how we can continue to push the league here, push ourselves and continue to grow.”

Going up against three giants of the women’s game would be tough for any club, let alone one Lagonia describes as “semi-professional.” Servette trains four evenings a week and only this season has employed a handful of full-time players who occasionally train one morning a week when the busier schedule allows.

The club is fully supportive of the team and Lagonia has nothing but praise for the way the club is helping to support, grow, and shape the women’s game in Switzerland.

“They do fantastic work with us in terms of trying to get us in the best shape possible to compete in these games. The support behind the scenes is there, they try and provide for us.

“This is my third season and it’s improved every season. You can see the club is trying to bring this team up and the women’s game, it’s definitely the most professional club I’ve been at. They’ve really invested. They’ve put effort in and made a conscious decision within the club to bring the team up. It’s a great push for women’s football, we’ve had fantastic girls coming in which makes a big difference and it’s going well and it’s going well this season again.”

While experienced Switzerland internationals Caroline Abbé and Sandy Maendly make up a key part of the team, the club has gone out and recruited exciting young talent during preseason including young Poland forward Natalia Padilla, who made her international debut earlier this year.

Portuguese international duo Inês Pereira and Monica Mendes also signed, as did striker Jade Boho after two successful spells in Spain either side of two years in England with Bristol Academy and Reading, but it’s still nothing compared to the riches and depth their opponents will come with on their flight to Switzerland.

“They have some of the best players in the world and we’re very excited to see what their level is,” said Lagonia. “It will be a great chance for us to learn, but at the end of the day, it’s 11 players against 11 players.

“We’ve trained, we’ve studied them, and we’ll try our best to break them down and stay compact. Hopefully we can find some space and some solutions out there but they’re one of the best teams in the world and some of the best players in the world, but I’m personally very excited to play against them. I’ve been watching them for the last 10 years.”

Lagonia has good reason for having followed their progress. In 2012, the striker signed for Doncaster Rovers Belles, an FA WSL side at the time, and played against Chelsea, albeit an unrecognizable one compared to today’s squad, bar goalkeeper Carly Telford.

“I was playing at university in Canada and with the national team at the time. I asked my coach, who was also an agent in the men’s game, to find me a club and it was Doncaster Rovers Belles who answered the phone first. I went for a one-week trial, packed a bag for one week, and ended up signing and staying the whole season.”

Lagonia played in and started 13 of the team’s 14 league games that season, scoring twice, the first of which came against none other than the same club she will walk out and face in Servette on Tuesday evening.

The Belles ended the season seventh, just one place behind Chelsea who were nowhere near the level of today’s side afforded to long-term coach Emma Hayes, and Lagonia has nothing but good memories of her time in England.

“It was a great experience but the FA WSL was just in its second year,” she recalled. “There were definitely challenges that went with that in terms of level of professionalism and the setup itself.

“It was difficult for me coming over from Canada but it was a fantastic learning experience and I got a lot out of it. The girls were fantastic, the staff were great, but it was still early days. From what it was then to now is night and day and I’m so happy to see how it’s grown. I could see that vision back then and the direction they wanted to go in, but back then it definitely wasn’t there yet.”

She added, “I remember scoring against Chelsea. That moment was pretty special. I remember playing Arsenal too, they needed to win to clinch the title and we really took it to them, but we scored all the goals and they still won as we had a few own goals. We had a good group and I did love my experience there.”

Despite only Telford remaining from the Chelsea squad Lagonia faced nine years ago, there will be plenty of familiar faces for Lagonia to catch up with pre-match.

Her strike partner that game and throughout the season was current Chelsea forward Beth England, while Millie Bright also made up a key part of the Belles team during the campaign.

Current Chelsea assistant coach Tanya Oxtoby also played regularly for the Belles that season while Paul Green, who now works behind the scenes with Hayes, was the Belles assistant manager during Lagonia’s time at the club.

“I can’t wait to see them all. I saw Mary Earps last week at the European Championships draw who was at Belles, I hadn’t seen her since our Donny days so I’m excited to have those same reunions with Beth, Millie, Tanya, and Paul too.”

Coming to Switzerland has also allowed Lagonia to both find and fulfill her passions off the field when she isn’t busy playing at weekends or training in the evenings.

Aside from earning her FIFA Masters, Lagonia works in the women’s football unit at UEFA, helping to develop the very sport she lives and breathes day in, day out.

“We work on various projects around Europe,” she said. “Regional, pan-European, from grassroots to professionalization, it really varies and it’s a fantastic job. For me to be able to see what my colleagues are pushing for and driving and what I can contribute to while also playing and reap the benefits of what we’re working for at UEFA is really unique.

“I can relay what we’re feeling, what we’re going through directly to them and for me to be playing in the group stage after seeing the work that has gone in from my colleagues to get to where we are now is really special, really special. I don’t take these opportunities for granted. I’ve actually been injured for the first two group games so the Chelsea game will mean a lot to me.”

Lagonia didn’t stumble into the job either. After spells not just in England, but also in Italy, the striker actually retired for a period of time to concentrate on her FIFA Masters before returning to playing with Cypriot champions Apollon in 2017.

“I wanted to still be in the game but help it develop. I had great experiences but also realized how far we still had to come. There’s a lot of women still playing for the passion of the game, but the infrastructure behind it isn’t there yet in a lot of cases and I was inspired by that to come in and help grow it and this job really comes from that passion. I love it.”