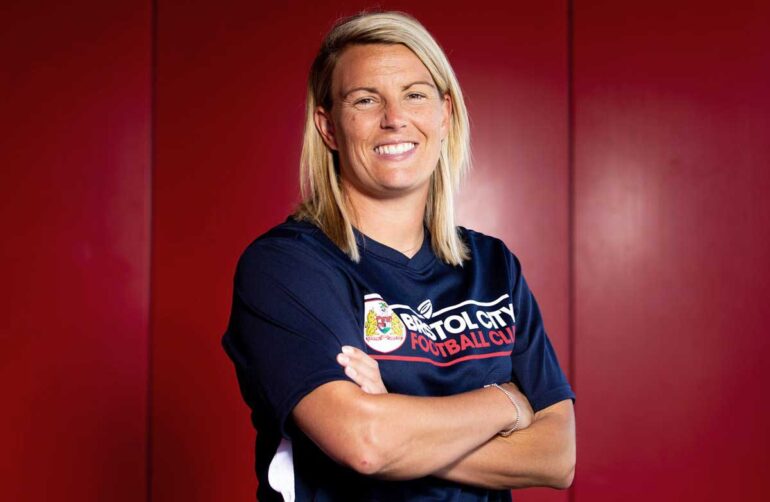 Oxtoby took over in the summer after a spell working with Marc Skinner at Birmingham City as well as a playing career that included playing for Doncaster Rovers Belles.

“It’s been really busy, a bit of a whirlwind,” she said. “The players are excellent and the staff really helpful and on board with what we want to do.”

Oxtoby has two Continental Cup matches under her belt already — a penalty shootout defeat to Leicester City and a victory against Sheffield United.

“It’s all the stuff off the pitch,” said the 36-year-old. “The recruitment, dealing with your staff, when you’re a coach you turn up, plan your session, and walk away happy. Management is a whole other kettle of fish but it’s really exciting.”

City finished eighth in their first season back in the top tier last season, just clear of Everton and well ahead of bottom side Yeovil Town.

But a big summer overhaul has seen manager Willie Kirk depart for pastures new at Manchester United while the club has also lost top scorer and England superstar Lauren Hemp to Manchester City.

Kirk took on a bold approach in terms of attacking the opposition, whoever they were, though it didn’t always ensure the best of results for the team.

Oxtoby still wants to employ a similar style of play but admits her side have to become “hard to beat”.

“It’s a long-term process where we want to be possession-based and play a positive style of football. While we develop that, it’s important that we’re hard to beat and people around the club want to work on that too.”

Few coaches within the FA WSL know how to work a style of football that mixes impressive attacking play with a solid defense like Birmingham’s Marc Skinner, who Oxtoby spent last season working alongside.

And the new Bristol City manager admits Skinner has had a big influence on her as she steps into the hot seat this season.

“Marc’s excellent,” she said. “He’s got one of the best footballing brains and the level of the detail he goes into is exceptional. Having that experience with him and getting to see how he works day in, day out was vital for me.

“The detail he went into was the main thing for me, I was privileged to work alongside him and that’s probably the biggest thing I took from my time with the Blues.”

Oxtoby has instantly taken a leaf out of Skinner’s playbook by recruiting and giving opportunities to young players.

The likes of Ella Rutherford, Poppy Pattinson, Juliette Kemppi, and Lucy Graham have all joined the club and Oxtoby says the club wanted to recruit with a “long-term vision.”

“Our young players are a part of that and we want to keep them here for two or three years so we can develop them. They’re such exciting talents and they want to learn, they want to be better. They’re in every single day asking questions.

“From our point of view, we’ve got our recruitment right, especially because we started quite late and were probably behind the eight ball a little bit. I’m really happy with where we’ve ended up.”

And former Millwall forward and England youth international Rutherford is one player Oxtoby is particularly excited about.

“I think she’s definitely one to watch. Juliette [Kemppi] and two or three more but if I had to talk about local talent I’d say Ella at this stage. She’s very bubbly, she brings that buzz wherever she goes. Technically exceptional, she likes to take people on and it’s about trying to get her in a position where she can get regular game time.”

Oxtoby will walk out as a league manager for the first time this weekend when Bristol go to newly promoted Brighton, managed by former England head coach Hope Powell.

With games against Chelsea and Manchester City set to follow, Oxtoby admits Brighton is a game her side have targeted to get early points on the board.

“I think we’ve always targeted that Brighton match anyway. The Continental Cup has been aimed towards Brighton and there’s always that pressure of it being the first league game.”

Regarding Chelsea and Man City, Oxtoby added, “That ten days is going to be a great little challenge for our group, we have to manage that with our squad because it could be a little bit tough on them.”

In terms of the wider picture, the Australian is looking to improve on last season and ensure her players gain experience across the whole season, both on and off the pitch.

“We have our internal goals that we’re working towards and being successful in the league is our number one priority. We’d like to have a good run in the FA Cup but the goal is the players understand our philosophy and manage the games.

“It’s not just about playing pretty football, we need to manage the games when they need to be managed and fingers crossed our young group will get better and better at that.”