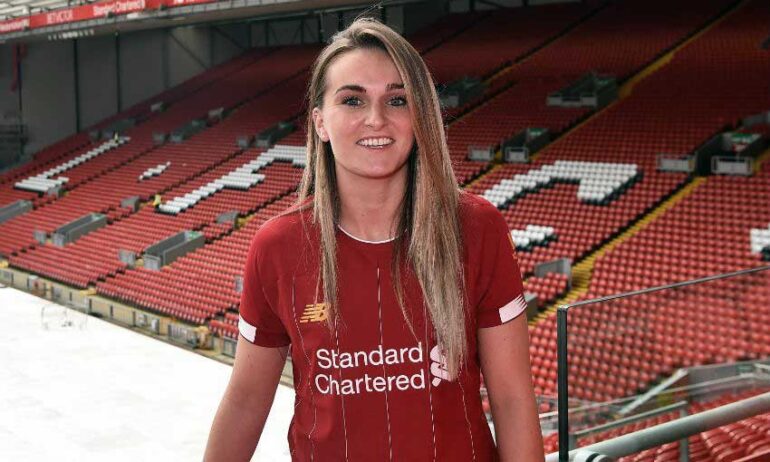 At Liverpool’s training base that they share with Tranmere Rovers, as they do their stadium at Prenton Park, Mel Lawley is for a while quiet and unassuming.

Described by some who know her as a private, proud individual, Lawley is embarking on a new challenge with the 2013 and 2014 FA Women’s Super League champions after a difficult end to her time with Manchester City, where she won the FA Cup final as a starter in 2017 against former club Birmingham City.

But as the interview — which has already been postponed for a week due to her late call-up to the England squad for a trip to Norway — progresses, Lawley comes out of her shell and shows her new, happier self as she smiles her way through memories of growing up around football, her new-found view on education, and her love of shopping.

The 25-year-old has been at Liverpool a matter of months as she looks to be the spark to help Vicky Jepson’s side back toward former glories, but she’s aware she’s part of a journey that is only just beginning after a tricky start to the season.

“I’ve settled in really well,” she said. “The girls have been really welcoming and Vicky has given me that confidence that I need to become the player that I know I am.

“We had six or seven weeks in preseason to get to know each other. With this group of girls, we’ve got a journey that we’re going to go on and I think good things are going to come.”

Lawley has already moved from Manchester to a new apartment, a set of which are provided by the club for players, on the Liverpool docks and shares with left back Jemma Purfield.

Lawley’s move and early performances have earned her a recall to the England squad under Phil Neville, two years on from scoring on her debut against Kazakhstan, but her career has been on several ups and downs in the past 24 months.

“Having been out for a while it was nice to get the phone call from Phil. Hopefully, I went in there and showed what I was capable of.

“Missing the World Cup, I feel that pushes me on and I want to push myself harder for the Olympics and Euros. I’m just going to play as well as I can and see what happens.”

Lawley was in her apartment getting ready for training when she found out that instead of preparing for Liverpool’s next domestic match she would instead be heading to Norway as England played their first set of friendlies post-World Cup.

This weekend sees Lawley return to her former home when Liverpool face Birmingham City in what is a crunch encounter for a very different reason to what it would have been when Lawley was wearing blue rather than red.

Lawley was part of the Birmingham City side in 2014 that drew with Notts County on the final day of the season, a result that allowed Liverpool, then managed by Matt Beard, to snatch their second consecutive FA WSL title.

But now the two sides languish at the bottom of the league, with just a point and a goal between them, Lawley’s penalty at Bristol City last weekend leaving them just ahead of Marta Tejedor’s side.

Lawley’s performances earned her a move to Manchester City at the end of 2016 and she soon won the FA Cup and became a regular in Nick Cushing’s starting lineups and it looked like her career was going to go from strength to strength.

But the emergence of new players and a change in system meant Lawley was soon on the fringes during her second full season at the club.

She played no part in either City’s Continental Cup or FA Cup final successes last season and soon became one of the forgotten players at the club, with a move away in the summer a certainty for the winger.

“As a footballer you want to play every game, but if a manager doesn’t pick you come Sunday you have to look at yourself to try and do better,” said Lawley. “It was a tough year but I’ve learned lessons from it and coming to Liverpool now, those negatives I know are going to make me a better player and a better person.

“Moving to Man City was a big ask for myself but the first year I think I took it in my stride. I just see it [last season] as a learning curve, even though it was the worst year of my life, I’ve grown stronger as a person and I know what I want in life now.”

She added, “You learn more about yourself in the difficult moments. You never expect to be that low but at the end of the day I’ve come through it and I’m a stronger person now.”

Her experiences at Man City seem to have given Lawley a different outlook on her life. She has focused on happiness, even on her education and what she will do when football is no longer an option, and perhaps has benefited and will continue to benefit long-term from a negative 12 months.

“After City I was looking at myself and I decided to be a better player I had to be happy. Coming to Liverpool I knew Vicky was going to give me confidence and make me a happier person and that’s when I’m at my best.”

Re-focus Off the Pitch

Lawley relaxes and starts to show her new-found happiness as she jokes about now taking her education more seriously and how she winds down away from the football pitch, fresh from the shackles of an unhappy season and now back playing regular football and back in the Lionesses squad.

“Until last year I think my football experiences were all positive. Birmingham City, the England squad, then all of a sudden, boom, it was a reality check. But I take it as a positive because I’ve also started to look at my life outside football because one day football’s not going to be there.

“It’s taught me to focus on education. It’s taken 25 years but at least it’s happened,” she laughed. “I’m trying to get into podiatry. I’ve been looking at Unis but they’re all full-time courses so that’s hard to fit in.”

Lawley is at ease reminiscing about how her career started many years ago and like many other girls, her interest piqued watching others around play a sport she would soon fall in love with.

“I was eight years old and I went to watch my cousin play football. They were short on numbers and just shoved me in — that was it really!

“I used to play with the lads out on the street. I watched my uncle play, I just loved football, I was thrown in at the deep end really.”

Lawley moved around a lot and has done so ever since, now playing for her fourth major club at the age of just 25. Growing up in Kidderminster, she would go through Aston Villa’s academy before ending up at Arsenal as a teenager, before playing for Bristol Academy, which would eventually lead to her move back home to Birmingham City.

“I think I was 16 when I went to Arsenal,” she recalled. “I was quite introverted, a bit within myself. I made my debut in the Champions League under Laura Harvey and I remember thinking, ‘This is what I want, this is what I want to be.’

“Looking back, I think moving to big clubs is a big ask for a young kid wanting to play football but it’s made me the person I am. All the negatives I’ve taken on the chin and hopefully this year I can just show everyone what I’m capable of.”

Lawley admits she never thought about a professional football career and like many probably didn’t believe it to be an option as she fulfilled her hobby of kicking a ball around with friends for fun.

“I just loved football,” she said, smiling. “I didn’t really think about it, but once Birmingham offered me that full-time contract I knew it was what I wanted. Once I got that my aims went higher. I thought about England and in my first game against Kazakhstan it was the most amazing feeling, I crave that feeling.”

Lawley is family-orientated. While many players talk of older brothers getting them into football, it is now Lawley leading the way for the younger generation of her own family, but she admits, like any footballer, sometimes she needs a break from football given she’s living it almost 24/7.

“I’ve got a younger brother and sister who look up to me and they both play. My mum and dad don’t play football. When I used to go to the park I couldn’t take my mum and dad because they can’t kick a football! They watch me though, they love watching me.

“But sometimes you need to switch off. Whenever I go home the kids just want to go in the garden and I’m like, ‘Not today…’ We’re in it 24/7, so when you go home you want to switch off. For family and friends, they think it’s a hobby, but it’s our job. It’s like you having to go home and talk about football 24/7, you need that time to switch off.”

Lawley can’t rely on her dog to pass away the time between training and games, living in an apartment means she’s had to leave her pet at home but she’s found other ways of occupying herself in a busy city: “Just shopping really, I do love shopping.”

Now it’s about looking forward, part of her new outlook since moving to Liverpool as she looks to make the most of her return to happiness and to help Liverpool rise up the FA WSL table.

With the Olympics and a home European Championships on the horizon, it’s a good time to be making a return to form but Lawley says she won’t stop aiming for what she wants just because she’s now in a good place.

“As a footballer you have to aspire to goals because if you haven’t got something to aim for there’s no point in doing it,” she said. “I want to get to Liverpool to where we should be and make the England team. At the same time, I want to be happy because if you’re not happy you’re not going to play your best football.

I’ve always had goals in the back of my head but you don’t always achieve them, it’s life, you’ve just got to move on.”