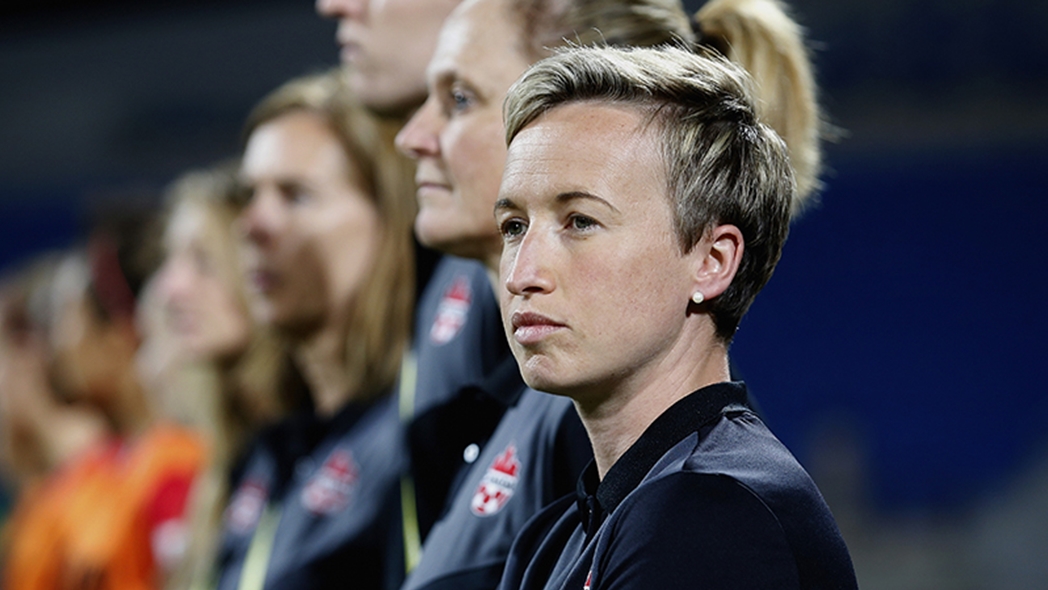 England assistant manager Bev Priestman says head coach Phil Neville is the “most open guy I’ve met” as she approaches the end of her first 12 months in the job since replacing Casey Stoney.

Formerly of Everton, New Zealand, and most recently Canada, Priestman had previously worked for The FA before applying for the vacant assistant role last year.

The pair work closely together and Priestman admits their morning runs together are “a big part of what we do” as they look to combine in order to guide England toward World Cup glory.

“We complement each other,” she said. “What I’ve learnt from Phil is he’s the most open guy I’ve met. He recognizes my experiences, draws on them, and uses them. I’ve brought the learnings across tournaments, so when you get to games that really matter, seven games in after 50 days on the road, you have to be prepared for that in your first training session so you get that balance right.”

On the flip side, Priestman admits there are things she and the team will learn from Neville, despite his relative lack of experience in women’s football.

“Phil has brought me his man-management, he is world-class at that and you have to allow him time to not get bogged down in the details so he can get the best he can out of every player.”

Neville has often spoken about the fact he was left out of England World Cup squads on three separate occasions, but Priestman says he is taking his first taste of the tournament “in his stride” ahead of the second Group D match against Argentina in Le Havre this Friday.

“I can see the excitement in his eyes. He’s had Champions Leagues and everything that’s been in his past but I genuinely believe, and I’ve heard him say it, that this is the biggest thing he’s ever done. He eats, sleeps, and breathes the Lionesses and that’s refreshing. The girls feel that and they will run through a brick wall for him.”

Priestman admits Neville doesn’t reference his successful time at Manchester United “as much as he should,” adding that he’s “humble and laid-back” and largely focused on ensuring a successful tournament for his England team.

The Consett-born coach worked at Everton under Mo Marley before taking on roles with New Zealand and Canada, where she worked with John Herdman, who was a name heavily linked with the England job after Mark Sampson’s dismissal at the end of 2017.

Herdman moved into the men’s game after being offered the chance to manage the Canada side ahead of the 2022 World Cup and his former assistant believes the two coaches are very different in their approaches.

“They’ve been on very different paths,” said Priestman. “My background is sort of the John Herdman path, so coming across to work with Phil, it’s a great combination. Phil is a world-class man-manager and has worked under the best manager in history, he’s played the game at the highest level and that sort of confidence, when you’re alongside someone who’s won and nothing phases him in that sense, as a staff member it gives you a lot of confidence to do your job and deliver.”

Priestman echoes Neville’s thoughts when it comes to creating a togetherness in the group, adding there is a “common goal” between the Lionesses and her former Canada side in wanting to do their own countries proud.

Priestman said, “The biggest thing is our ability, but what I’ve learnt previously is you have to know tactics, but team spirit, togetherness, and a winning mind-set, and Phil has really brought that. Those three things, it can’t be one, if you only have one and are out of kilter with the other that’s a real challenge, so I think this team has that extra edge and ability and as long as the mind-set is right, we can go and do great things hopefully.”

On making a country proud, Priestman added, “They want to do England proud and want to make the country stand still and create a moment that lasts forever like they did in Canada. But I think they are also a group of girls who have grown up through the ranks together, get on great, and part of that is our own leadership by making sure the environment is a fun place to be. They are on the road together for a long time and that freedom and togetherness is part of that. If you enjoy coming to work, it makes you work harder.”

Midfielder Jade Moore, who was on the bench for Sunday’s opening win against Scotland, also backs up Priestman when speaking about the impact Neville’s man-management has on the squad.

Moore was a key player under Sampson but injury has meant she’s had to settle for a bit-part role under Neville so far, but she believes to have someone with his experience in football can only be a positive.

“He definitely commands that respect,” she said. “As a player, when you’re a kid if your coach had played football there’s definite respect. If they could hardly kick a ball you’d think ‘why are they telling me that,’ so there’s an element of that with Phil.

“When he stepped in you knew his background, you understood he’s worked with one of the best managers in the world so it’s instant respect. He’s got this wealth of knowledge that hopefully for me as a player I want to soak in. I just want to sit there and listen and learn from who he has worked with.”

Priestman, like Moore, has worked with both male and female coaches during her career and admits she believes women have better “emotional intelligence.” She thinks Neville’s work in the men’s game plus the fact his sister Tracey is a high-profile netball manager means he has the best of both worlds.

“Phil’s quite unique in the sense that he’s got a great intuition and gut feel,” she said. “Historically, that’s what I’ve believed, that women have a good gut instinct, feel, emotional intelligence — they understand women.

“But, I actually think Phil’s sister being in netball [means] he actually has that, he’s got a really good feel and he’ll use the people around him — he’s really good at that, tapping into ‘Bev, what do you think about this?’ You understand where they’re coming from, the more emotional side of it, that’s probably the difference.”

Moore agrees with Priestman when it comes to what Neville brings to the team on a mental level but says she’s worked with male coaches who were more emotional than her female coaches.

“I’ve been managed by both and sometimes men are more emotional than women. If there’s not a lot of differences, knowledge plays a part. A few of the male coaches I’ve had played at a high level so they can shine a light on that. From female coaches, I’ve had a few of them have a better grasp of man-management, of sitting down with you and being able to sympathize and empathize and say, ‘I’ve been there and done that and I know how you probably feel in this situation,’ whereas sometimes men are much more straight to the point — you’re in or you’re out.”