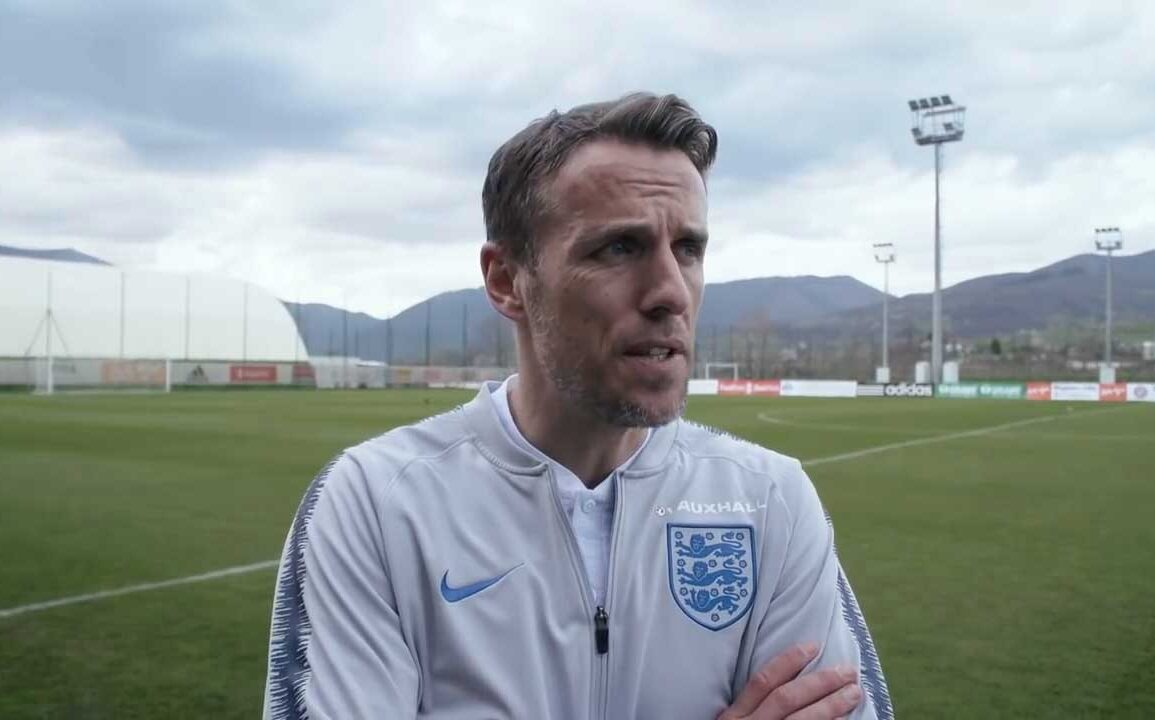 Phil Neville addressing the media.
Phil Neville says he wants to “recreate the spirit” the England team showed under former head coach Mark Sampson in 2015 when the Lionesses brought home a bronze medal as the best-placed European team.

Speaking at the official press conference 24 hours ahead of their Group D opener against neighbors Scotland, Neville was in a jovial mood alongside captain Steph Houghton and appeared relaxed ahead of his first match at a World Cup.

“If we have that then I’m almost certain we will be successful here. If we don’t then we’ll end up with egg on our faces and that’s the challenge for us.”

With the game now less than a day away, Neville also offered updates on injured duo Demi Stokes and Toni Duggan who were previously major doubts for the Scotland encounter, but Neville seemed more optimistic about their involvement, adding that both are “desperate to be involved.”

Stokes took part in the team’s last training session on Saturday afternoon whereas Duggan did some “light training” as Neville described but the head coach admitted he was confident both would be fit enough for selection.

It may only add to his headache as everyone tries to second guess which XI Neville will put out against Scotland, with both the left back and left wing positions two of the most hotly contested and both Alex Greenwood and Beth Mead vying for a starting spot even if Stokes and Duggan pass the fitness tests they’ll go through in the morning.

Neville once again seemed almost bemused by the constant interest in his rotation of the team when asked if he would find it difficult to rotate if the team he puts out tomorrow performs well and wins well.

“From the minute I walked into the job I’ve been ruthless in the decisions I’ve made,” he said. “I’ve left a lot of my best players out in big games. People think I’ve rotated the team to keep people guessing and other teams guessing, I’ve rotated the team because I pick the best team to win every game.

“I picked the best team I thought was capable of winning a big game against Japan. I don’t see us as having a strong eleven, I see us having a group of 23 players and when I took the job I said to everyone they’d all get opportunities. Hand on heart, the team I select tomorrow probably won’t be the team that plays against Argentina or Japan because we have a certain way of playing, a certain philosophy.”

Neville once more referred to 2015 when discussing his squad selection, mentioning the United States using most of their squad during their charge to the tournament and also how Mark Sampson consistently changed both his team and his system during the last World Cup.

“The team changed every game, I’ve not reinvented the wheel, I’ve just followed on from what was successful at the last World Cup.”

Neville also admitted his players perhaps didn’t like his way of thinking when it came to rotating at the start of his time in charge but captain Houghton said the team have quickly come around.

“It was a bit strange at first, there’s always a lot of change when you have a new manager but it’s brought out the best of us and given players experiences in big games against big teams.

“We need players who are ready to come and win the game and shut the game down so for me, the team are happy, we’re together more than ever, excited for tomorrow because it’s been a long time coming waiting for this World Cup.”

Neville interestingly described Scotland as “by far the toughest game” despite the fact the Lionesses also face a Japan side who have been in the last two finals and won the tournament back in 2011, but says there’s nothing special or different he’ll be saying to the team tomorrow night.

“Tomorrow night is not about motivation, it’s about calmness,” said Neville. “I want to see them play with that freedom, with smiles on their faces. We pride on ourselves on wanting to enjoy our football and keeping the players fresh.

“We want them to play to their full ability. It’s not pressure, it’s just a football game out on the pitch against an outstanding team in Scotland in an unbelievable stadium. We wanted this, we wanted to be at a World Cup where the crowd will be amazing, the media attention is massive and we’re not going to back off or shy away from any challenge now. It’s delivery time, it’s time to stop talking and produce our best form. It’s time to play.”

Scotland head coach Shelley Kerr, awarded an MBE on Friday night, says her team’s preparations have been going well and her team are ready for a rematch after their 6–0 defeat in the opening game of Euro 2017.

When asked if the pressure was on Neville’s side rather than hers, Kerr was unequivocal in her response.

“100 percent,” she stated. “It’s our first World Cup. Our journey so far has been fantastic and we’re playing against a formidable England team ranked third in the world. Phil Neville said his job was to win the World Cup so we know it’s going to be a really tough game.

“There’s certainly no doubt there’s more pressure on England but the pressure we have is what we’ll put ourselves under. Of course, we’re hoping to win the game, any coach goes into any game hoping to win it but it’s going to be a tough match.”

Neville spoke of his great respect for Kerr in his own press conference and the former Arsenal manager says she has a fully fit squad to pick from ahead of the game.

Captain Rachel Corsie, who played in that 6–0 defeat two years ago, doesn’t believe the memories will play any part when she leads her team out at the Allianz Riviera stadium on Sunday.

“The honest answer is no, I don’t think it provides any added motivation,” she said. “There’s been a huge number of changes. Shelley’s come in, players have moved clubs, there’s been a huge amount of development in the squad as a whole.

“We know our responsibilities and we’re going to give it absolutely everything to do that.”