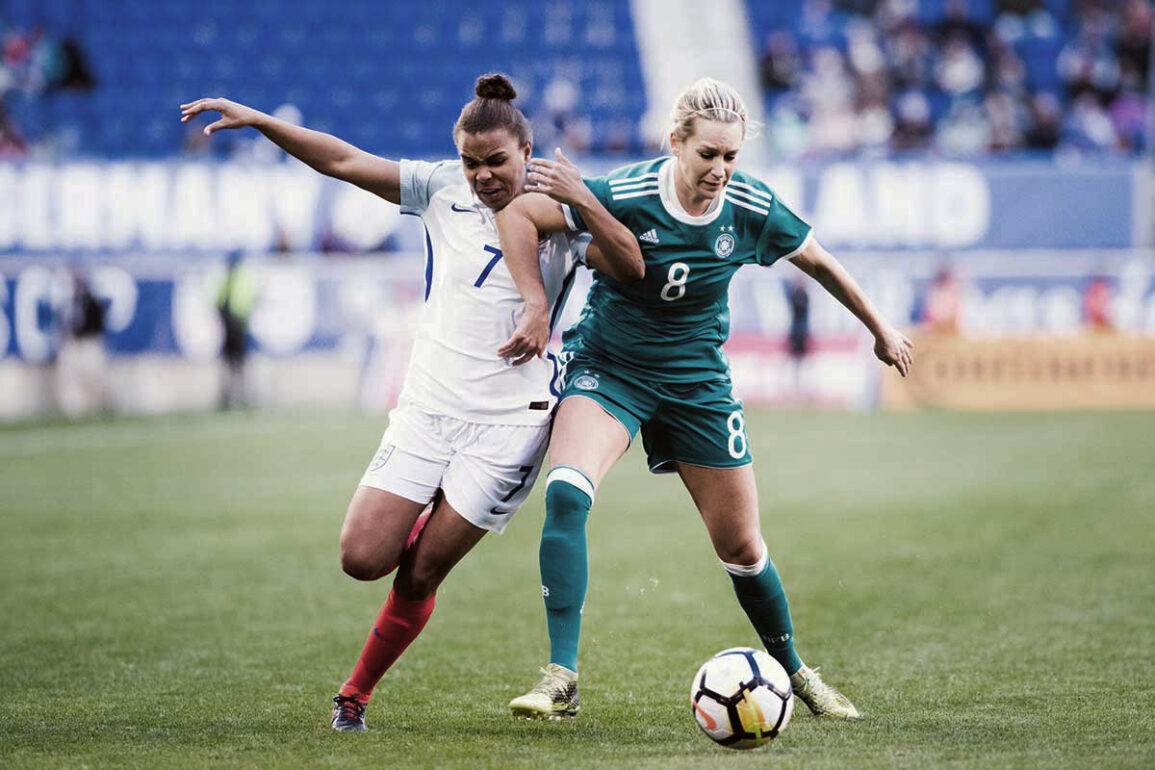 Monica Simoes / OGM
If you were to Google Lena Goeßling and click the images tab, the chances of seeing her wielding a trophy or wearing a cup winners t-shirt are high: there are few Germans currently playing who can boast the same trophy haul as the midfielder-cum-defender.

A permanent fixture at VfL Wolfsburg since 2011, Goeßling has won it all with the German champions. Her arrival coinciding with the first season they finished high enough to claim a Champions League berth for the following term, the coveted European crown won in their first season as the She Wolves scooped the triple. Their second year in the competition brought about a second win as Wolfsburg came from behind against Tyresö in Lisbon in one of the most exciting finals the UWCL has seen.

Through it all — five league titles, six DFB-Pokal crowns, and a brace of Champions League wins — Goeßling has remained a crucial member of the squad (an injury-hit 2016–2017 is the outlier). As Germany prepare for their eighth World Cup appearance, the 33-year-old finds herself in a new role as the last remaining centurion. Having made her senior debut in 2008, the defender is the longest standing, oldest, most capped member of the squad; if any one of Martina Voss-Tecklenburg’s charges has been there and done it before, it’s Lena.

As well as the bling from her Champions League, Frauen-Bundesliga, and Pokal triumphs, Goeßling has won nearly everything with her national team, from the European Championship in 2013 to the Olympics in 2016. A senior World Cup winners medal is all that eludes the Wolfsburg stalwart (although she won the Under-19 World Cup in 2004), the chance of “completing the set” as it were, is an opportunity she’d grasp with both hands.

“The World Cup is the last title which is still missing… Of course, I know it also requires a lot of luck to win the tournament. So, all in all this would be a title to show the high level of the national team,” Goeßling explained.

Steady as She Goes

But to get to the final in Lyon, Germany will have to start at the group stage just like the other 23 nations gunning for glory, the first steps to get out of the group more than a formality with professionalism required for all three.

“We have to take every opponent seriously. Spain, for example, has many technically good players and of course it’s also hard to beat South Africa and China. But we have a good team with a perfect mixture of young and experienced players; therefore, I’m sure we can make it out of the group stage,” she said.

For Goeßling, the path to glory isn’t one to be rushed down, nor is it one to tiptoe along, peering out from behind the bushes at who may lay ahead. The route to the final is a measured race, with no team or player holding more fear or allure than another.

“There isn’t any one team or a player. If we want to get as far as possible, we have to take the opponents as they come.”

This World Cup almost something of a novelty to Die Mannschaft as it will only be the second time they arrive as anything other than the defending European champions — Germany having gone through the most tumultuous period in her history (relative to women’s football) with a dismal showing at the last Euros. Just 22 matches after taking the reins from Silvia Neid, coach Steffi Jones was let go with the Germans on the cusp of failing to even qualify for the World Cup.

The tide, however, turned for the European powerhouse with interim manager Horst Hrubesch getting the team back on firm footing, the disappointment of 2017 only serving as motivation for those in the team.

“It is always our aim to be as successful as it is possible, so of course we had imagined [the European Championships] differently. But for us, the knockout is a big motivation for the World Cup and we will be better, I’m sure,.” Goeßling said.

With many of the old guard having retired since the 2015 World Cup, Voss-Tecklenburg has largely looked to youth to bulk out and revitalize her squad, with players such as Turid Knaak and Marina Hegering the notable exceptions. Yet, when it comes for players to watch, Goeßling opts for two who should be well known to those familiar with the squad.

“Dzsenifer Marozsán is a player who can decide a game by herself, she can read a game like no other and will help us a lot, if she is on her level,” she said. “And also, Alexandra Popp, she will carry the team along. These two players are very important to us.”

Better known to casual fans as a midfielder, the Bielefeld native has seen her duties change in recent times, being deployed farther back on the pitch. Some may even remember that she started the 2017–2018 Champions League final at center back next to Nilla Fischer, the newer role something that’s been easy to adapt to.

“For me personally it isn’t a big change, I still have a big responsibility for my team.” She paused before laughing, “The only difference is that I have to walk less.”

With teenagers Klara Bühl, Lena Oberdorf, and Sydney Lohmann getting a look under Voss-Tecklenburg as well as 19-year-old Giulia Gwinn already looking like she’ll become a prominent fixture in the team, it only amplifies the age gap between the new generation and Goeßling. However, the defender isn’t thinking about hanging up her boots just yet.

“I’m 33 years old, this will be my third World Cup but I’ll play as long as I can. If my body says, ‘No, it’s time to end the national career.’ That will be that, but I actually do not waste any thought about it,” she said.

Whether there is room for the experienced and versatile midfielder in the squad four years from now remains to be seen (and hey, if Formiga can do it… ). But for now it’s clear the depth of experience Goeßling has will be vital to the squad in France, no matter what role she plays on the pitch.