Georgia Stanway Looking Forward to Opportunity on the World Stage 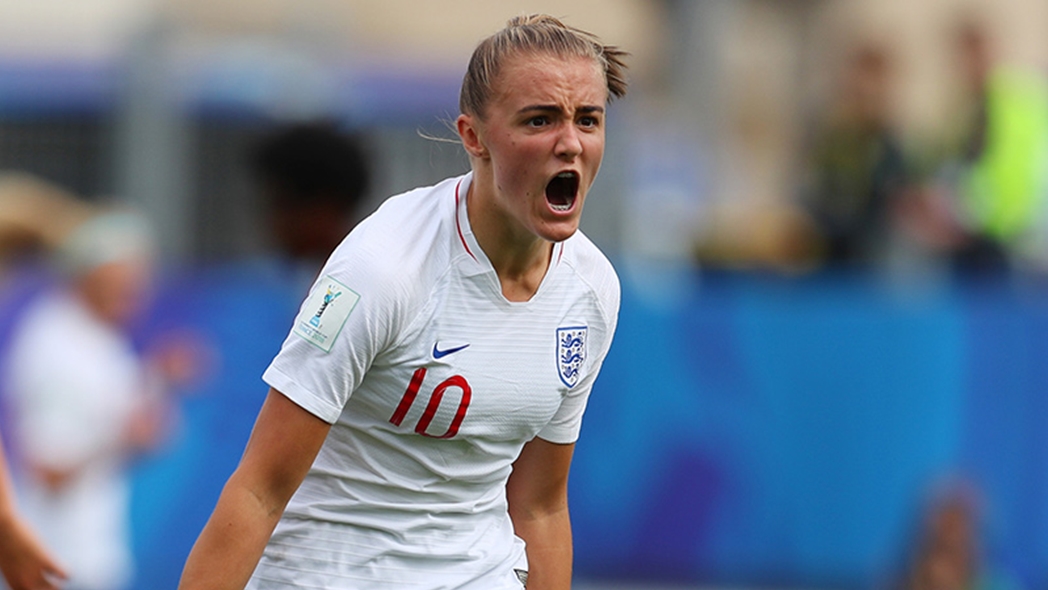 When England walks out against Scotland in Nice on June 9, it will be six days short of 21 years since Alan Shearer fired home England’s first goal of the 1998 World Cup in France.

For 20-year-old Georgia Stanway, the youngest member of the Lionesses squad heading to France this summer, Shearer was a childhood hero for a girl growing up as a devoted Newcastle United fan, so the prospect of following in his footsteps two decades later is predictably in her thoughts.

“Yeah, definitely — I’d be lying if I didn’t want to score at a World Cup,” she said. However, Stanway is mature enough to know it’s about the team. “I know that this team could be capable of anything. We’ve got the personnel to go as far as we want and we’ve got the capability to go on and win it.

“We’re not shying away from the fact that we want to go there and win it because there’s no point in going if you’re not competing for a trophy, so we’ll do what we can and put ourselves in the best possible position to hopefully finish with some silverware.”

Stanway’s no stranger herself to a goal or two in France. The Manchester City star shared the top goal scorer title at last summer’s Under-20 World Cup with Spain’s Patri Guijarro.

Stanway helped her side come home with a bronze medal and in what has been a 12 months of rapid progress, she’s now set to return with Phil Neville’s senior squad.

The Cumbria-born forward, though, has an experienced head on young shoulders, having already won all three domestic trophies available in England before she left her teenage years behind.

However, Stanway admits it’s been a roller coaster of emotions moving so quickly from the youth team into the senior side.

“To be honest, it’s been good, I’ve enjoyed it,” she said. “Everything’s happened in a short space of time and it’s been hard for me to be able to manage my emotions because it’s all just been a whirlwind. I think it’s surreal being here and these girls being the 23 that’s going to the World Cup.

“I think it’s hard for me to express how I feel because I don’t think it’s real. Sometimes I’ve got to pinch myself that I’m actually here and that I’m going to compete for England at a World Cup. It’s one of them where you’ve been dreaming about it from a young child but it’s actually here and it’s going to start in less than two weeks. I’m looking forward to the challenge and the girls are so, so supportive. I couldn’t ask to be around a better group of girls. Everyone’s got each other’s backs, so I wouldn’t want to be doing it with anybody else.”

Stanway has started England’s last two friendly games, both wins against Spain and Denmark, and scored on her senior debut against Austria at the end of 2018.

But with an array of talented forwards and midfielders in the squad, Stanway is certainly not allowing herself to get carried away with the first match against Scotland now less than two weeks away.

“I’d love to get the opportunity to show what I can do on the world stage, and I think everybody’s got the capability in this team to be able to do that. Whatever 11 plays, I think anybody can do the job and anyone can support. We’ve just got to bide our time and whatever happens, happens.”

The recently crowned PFA Young Player of the Year also accepts she’s “lucky” to be coming through the system at a time where women’s football is thriving and the top clubs now have access to better facilities and players can earn a professional wage as full-time footballers.

Stanway made her debut for Man City as a youngster and was already scoring league hat tricks come 2016 when she was only just turning 17, and her talent and improvement ever since has now earned her a spot in the squad.

“I think I’ve timed it perfectly in the sense that I’ve come through when the league’s been fully professional. I’ve played for Manchester City day in, day out, whereas girls would have been training on an evening and grafting that way, also having a side job.

“So, I think in terms of how I’ve done it I’ve been perfectly timed. But I’d also understand that everybody’s got their own journey and everybody achieves it in different ways. It might look easy but mine wasn’t easy, you never know what’s behind the journey and what it takes to get there — the ups and downs that I’ve been on. You’ve got to respect everybody’s pathway and respect that people are here for a reason.”

Like many others who have gone before her, Stanway hasn’t had success and a place at the top of the game handed to her, she’s had to earn it.

Growing up in a small town away from the major football cities, Stanway had to leave home behind as a teenager in order to pursue her dream.

“The biggest challenge for me personally was family-related,” she admitted. “Obviously, I’m from a small town where there’s not a lot going on. In order for me to achieve something I had to move out of there. ‘Not many people leave Barrow,’ that’s what’s said. You’ve just got to go out and find yourself.

“Moving away at 16, playing for Blackburn during my formative years, having to travel two hours there and two hours back three times a week put a lot of strain on the family and a lot of strain on us financially. I wouldn’t be here today if it wasn’t for my family. They basically gave up their lives for me to pursue my dreams.”

But Stanway knows and appreciates how lucky she is. Players who once represented England, and many of whom still do and will travel to France alongside Stanway, have proved to be trailblazers of the sport and the youngster knows only too well it’s now her generation’s responsibility to continue building on the foundations already set.

“I’ve got to look up to the older ones and look at how I can improve my qualities on and off the pitch. Me, Keira [Walsh], Ellie [Roebuck], we’re the ones that are stepping up and we’re the ones that in 5,10 years’ time are going to be the likes of Steph [Houghton], Jill [Scott], and Kaz [Carney], the ones that we’re looking up to now. So you’ve just got to be learning day in, day out to pick up how to be a role model for the future.”