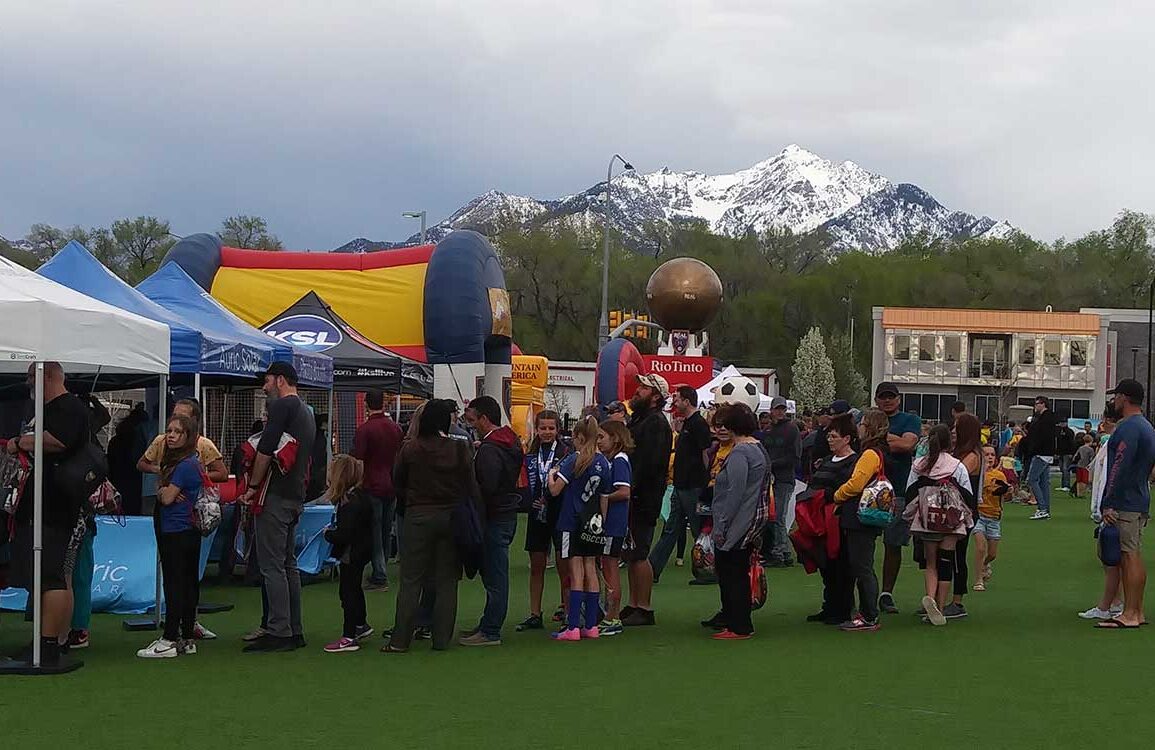 Before each kickoff, it’s common to find Utah Royals FC supporters gathering on Rio Tinto’s east lawn. In addition to the tailgating in the main parking lot, the Carnival Real is open to the public two hours before each home match, offering festival games, giveaways, and diverse delicacies from a group of food trucks. The Carnival hosts a steady stream of patrons passing the time before kickoff with shootout games, scrimmages, and bounce houses. In one of several booths, fans line up for autographs from some of the MLS-affiliated Real Salt Lake players while live music ushers in waves of URFC supporters.

The long-awaited URFC home opener on Saturday also served as the team’s season debut in the National Women’s Soccer League’s seventh season. The turnout, as well as the pre- and post-game festivities, was, in true Utah fashion, sensational for a team still finding its footing in its second season.

The Utah Royals burst onto the NWSL scene last April with an attendance of more than 19,000 fans for their home opener.

The club, born out of the ashes left over after FC Kansas City imploded in late 2017, seemed to sprout up in Utah overnight. There were a mere three and a half months between URFC’s inception to their first kickoff as the newest team in the league. Despite the compact timeline, the Royals managed to build a steady fan base in its inaugural season. I secured season tickets the moment they were available to the public, eager to witness the new NWSL team take the field in my home state. The community arrived in droves clad in yellow with the names of favored players on their backs once it was Utah’s turn to host their first game at Rio Tinto Stadium.

The event, headlined by recording artist Rachel Platten, attracted a community of soccer-loving supporters and was honored by the state of Utah earlier this year as the 2018 State of Sport Award for the Event of the Year by the Utah Sports Commission. In their inaugural season, the Royals had the second highest attendance in the NWSL and ended their season two points shy of a playoff position.

This year, URFC is back with a vengeance, and so are its many supporters. A crowd of 18,015 fans filled the stands at Rio Tinto Stadium (dubbed the RioT) on Saturday evening to ensure that this year’s home opener would be as award-worthy as the last.

In its second season under head coach Laura Harvey, Utah has settled into a more unified front. Though the team is projected to temporarily lose seven international players to the 2019 FIFA World Cup this summer, squad depth has been strengthened by some notable newcomers.

Former Spanish international Verónica Boquete (Vero) signed in the offseason and adds to the URFC attack, returning to the NWSL after playing with the Portland Thorns in 2014. Utah has also added youth through the 2019 NWSL College Draft. Rookie Michelle Maemone, for one, is among the new faces on the roster and was in the starting lineup for URFC’s season opener. She gave a solid defensive performance, creating a scoring opportunity and completing 84.2% of her passes. Vero came out swinging and winning tackles, and played the full 90 in her Royals debut.

Face Off against the Spirit

For its home opener, Utah faced the Washington Spirit, 1-0 winners over Sky Blue FC in the league’s opening weekend. With three points on the line, Vero Boquete made an instant, energetic impact in the attack. From the first whistle, Vero pressed high and put pressure on the Washington Spirit defense, creating two scoring chances while winning a couple of tackles.

The Utah crowd responded in kind and vocally commentated all game long, such that you could guess the position of the ball on the field with your eyes closed. But even the enthusiasm from the stands wasn’t enough to drown out Laura Harvey’s sideline coaching as she urged her team onward.

The environment in the RioT was electric and constant and reached an ear-shattering crescendo with a 10th-minute goal by midfielder Lo’eau LaBonta, assisted by Christen Press. After poaching the ball off of Spirit defender Paige Nielsen, Press wove her way into the box and laid off an impressive nutmeg pass to LaBonta at the top of the box. LaBonta had space and time to drive a low shot to the right corner of the net, narrowly escaping the gloves of Aubrey Bledsoe. The first Royals goal of the season was accompanied by firework blasts of celebration as Utah opened up its scoring account.

Despite the excitement of an early home-side goal, things on the field seemed to lose pace as the Spirit settled into the match. Utah struggled with connecting passes and had a few too many heavy touches and long balls. Both sides struggled with creating viable chances on goal. Gunny Jónsdóttir, normally a constant pressure in the midfield, was quiet in the first half, while Amy Rodriguez didn’t find the ball often enough to be much of a threat.

Utah’s offense provided several nail-biting moments from playmaker Christen Press and a number of missed goal-scoring opportunities. Newcomer Vero continued to impress both offensively and defensively, adding an apparent new edge to the Utah midfield. Her offensive speed created chances that kept supporters in the RioT on their toes.

The fans stayed with the match every moment, from cheering on the home side to encouraging a surprise break-dancing performance from a photographer on the field at halftime. Fans sent off Amy Rodriguez with boisterous applause and were even more vocal welcoming top scorer from last season Katie Stengel into the match, as well as fan favorite Kelley O’Hara. There was also a warm welcome for Utah midfielder Mandy Laddish, who made a comeback to the field after a nearly three-year absence.

The energy picked up late in the second half with familiar and crowd-pleasing performances from the Royals: Gunny going to ground to pick up loose balls, Press weaving through the offensive half with ease, and a late chance on goal from Stengel that was blocked by Spirit goalkeeper Aubrey Bledsoe.

Every minute of the match was documented by the chorus of URFC supporters, which created a special, unified feeling throughout the RioT. In the end, Utah was able to hold off the Washington Spirit and secured three hard-earned points in their home opener.

After the final whistle, Iceland international Jónsdóttir led the crowd in a victory Viking clap, followed up by now infamous three-point-dance featuring Desiree Scoot. Once the players departed, fans were invited down to spread their blankets on the field for music and fireworks.

Though there was a lot of back and forth in the game, coach Laura Harvey was pleased to have secured the win for the home opener.

“Really happy with three points. We’ve said all preseason we wanted to start out results-wise better than we did last year, and this was a good opportunity to do that and we did it. A clean sheet is always nice,” she said of the team’s performance in the postgame press conference.

Harvey said they had a lot to learn and wished the team could have been better on creating more chances and converting shots. She also expressed wanting to be a bit riskier on the ball to force opponents back and open up chances.

“I think we’re a bit safe with our possession,” Harvey said, which is an area they hope to improve on in the future. Even so, an early win in the season came as a relief.

On Vero Boquete’s, Harvey said, “What Vero brings to this team is, when she’s got the ball, one, you never ever think she’s gonna give it away, and two, it just adds confidence to the team, and she can play passes that other people don’t see … I think the more we can get her on the ball, the better.”

“Well, it feels great because you hope to win, but we are not 100 percent happy because after a long preseason, and the hard work that we did during these past weeks, we think that we could do better, that we should play better, that the results should be bigger for us,” she said.

But she promised an improved performance going forward, saying of the environment at the RioT:

“When you step out in a stadium like this and you see all the fans, you just feel a little more professional because they are the reason that we are there. Of course, we have the passion for this sport but when you go outside and you see all these people that come to see us to watch our games, it’s just a special feeling.”

Harvey had praise for another newcomer, rookie Michelle Maemon, who was called on to start despite a high fever the day before the home opener.

“For a rookie to step in this environment…” Harvey started with, “I don’t think she even knew what day it was when she came on. She’d just given absolutely everything to the team. And that’s who she is, actually. That’s just the mentality and character she is. I thought she did really well for her first game.”

Harvey was happy with the subs who brought a lot of late chances to the offense and noted players who will be asked to step up with the loss of several national team starters, including Stengel and the game’s lone goal-scorer LaBonta.

Of the overall event, Harvey couldn’t have been happier with the result.

“Oh it’s just phenomenal,” she said. “Everyone would talk about last year’s home opener and it was a fantastic event, it was amazing, and the thing that always just ate in my soul was we didn’t win the game. And I think that tonight we put that right. And I think from the players’ perspective, from everyone that works at this club, and gives everything every day to see 18,000 people doing the clap at the end is something … that’s why you wake up at five a.m. to go and do your job and get in at midnight — I think that’s not just the players, not just the coaching staff, but absolutely everybody that works at this club I think that that’s just a special moment that we’ll remember for a long time.”