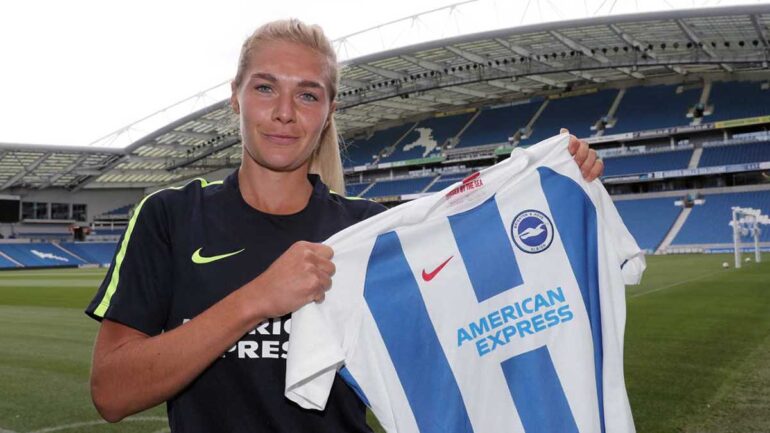 Brighton & Hove Albion had to quickly step up preparations for their debut FA WSL season after it was announced they had won a license to step up from the second tier to the top division for the 2018-19 season.

The final piece of the jigsaw puzzle was Doncaster Rovers Belles midfielder Emily Simpkins, the midfielder joining only a few weeks before the start of the season after Belles voluntarily dropped out of the FA Women’s Championship.

“I’m really, really enjoying it,” said Simpkins. “It was a big jump coming down here. I’ve been straight in, making my debut against Chelsea, but the structure and the professionalism of the club is great, I can’t speak too highly of it.”

The 28-year-old started Brighton’s opening match of the season against Emma Hayes’ champions in the Continental Cup, with the Seagulls not at all disgracing themselves in a 1-3 defeat that actually left Brighton wondering what could have been.

“We took positives from that. I don’t want to say I was disappointed going in at 1-0 down but we did so well and the goal was down to us really. We were proud of ourselves and we’ve taken great confidence from that going into the season.”

Simpkins is one of several new arrivals as attention now turns to their first league game at home to Bristol City on Sunday, but the midfielder says she’s slotted straight into life on the south coast.

“I came down and I felt like I’d been here a while,” she said. “The girls straightaway felt like friends. The atmosphere is great, it can be tough because you’re coming in every day but I’m excited every day because of the setup. As a team, we’re gelling and hopefully that showed against Chelsea because we had a lot of new players.”

Regarding the match against Tanya Oxtoby’s Bristol City, it’s a good chance for Brighton to get points on the board early with Bristol coming home in eighth place last season and undergoing a large turnover of players during the offseason, as well as a change of manager.

“Bristol is a little bit of an unknown so it’s concentrating on us and what we can do. We’re expecting them to come out, they have a young team so their fitness levels should be good but I’m fully confident for us going into that game and I’m looking forward to it.”

It may be a chance Brighton needs to take with games against Birmingham City, Liverpool, and Chelsea set to follow, and Simpkins admits the big games are the ones to look forward to even if her side may struggle to pick up the results needed.

“Every league game is a big game but you look forward to the big names because it’s a chance to make a statement.

“The league is our priority, we want to show our capabilities. We’ve got all the facilities to become the best players and team we can be so we have to see how far we can go.”

Moving south to Brighton has also given Simpkins a taste of what life is like working with Hope Powell. One of the most respected coaches in the game for the length of time she spent as England head coach, Simpkins has only positive things to say about her new boss.

“Fantastic,” she said. “to be on the grass with her every single day. You’ve got to be switched on because she’s giving you those little bits of information which can add to your game. Some of the things she comes out with in training make you feel lucky to be working with her and I can’t speak highly enough of her as a coach and a person.”

With Powell’s experience at the top, Simpkins will also be taking on the role of one of the more experienced players this season at the age of 28.

With a team of players that haven’t all been playing together for too long and some who are inexperienced in the top division, Simpkins says everyone has to “believe in themselves” and admits she may have to take on more of a leadership role during the season.

“Girls who haven’t played in this league before have to be fully going for it. I have to become a little bit of a leader for those guys and we have to take in that game management when it’s 0-0 so we can come in with something to play for. Within the group we have a great balance, we’ve got Hope and other experienced players but some really good youngsters too.”

Sadly, Simpkins won’t be facing her former club Belles unless the pair are drawn together in the FA Cup later in the season after the club decided to drop out of the Championship despite winning the league last season.

Simpkins herself played a key role in the success of the 2017-18 season but says she had to push on after it became clear her future wasn’t in Doncaster.

“I can only speak highly of Doncaster,” she said. “They were the first team to give me a professional contract and it’s disappointing to see where they’ve gone but I’m sure they’ll be back in where they need to be soon. We had a good run but you have to push on like myself and find new challenges.”