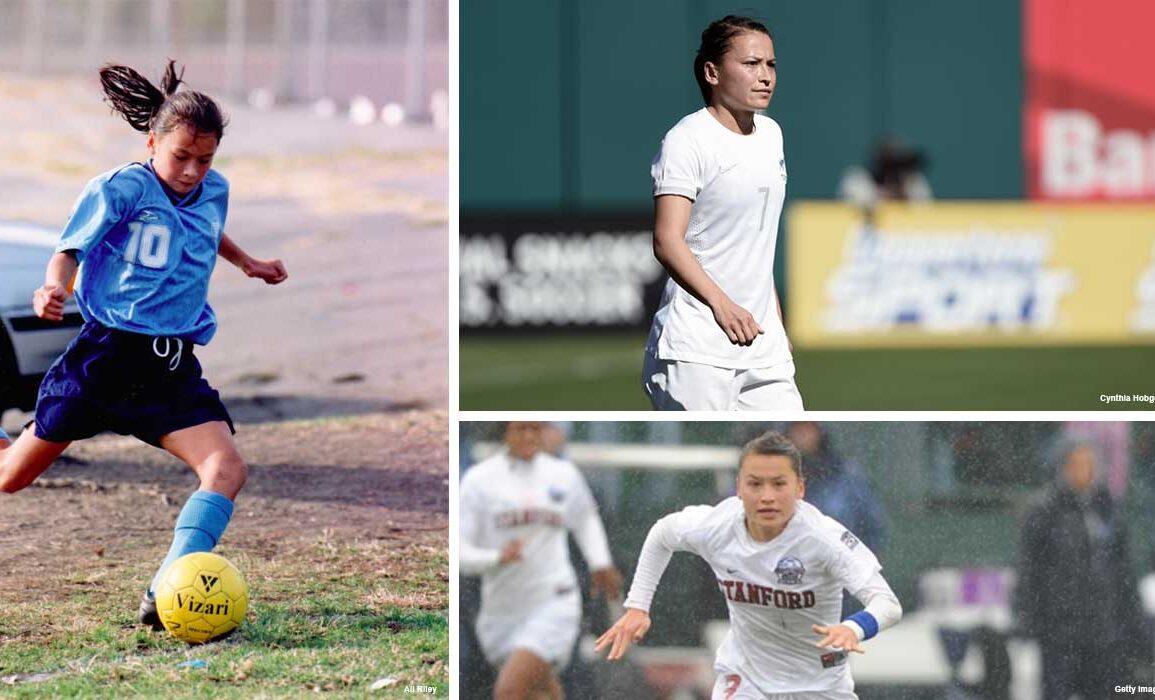 Editor’s note — This letter originally appeared in the print edition of Our Game Magazine.

I know this is a harsh way to begin, but someone needs to tell you. Don’t get me wrong, you have some good qualities, like being fast and aggressive and you’re able to toe punt your slightly flat soccer ball like it’s nobody’s business, but you have very little technique or understanding of the game itself. Teammates and parents will say you’re amazing, but when some players don’t even know which goal to score on, and others simply walk off the field when they get a little thirsty, the bar isn’t set very high. Just last week, your best friend, who plays goalie, bravely raced out of her goal to stop the other team’s breakaway. Unfortunately, her heroics were overshadowed by the fact that she picked up the ball near the halfway line and the other team was immediately awarded a free kick, which they scored. I don’t mean to burst your bubble, I simply want you to know that you’re not good at soccer yet. And that’s okay, since you’re only 12, and you also play tennis, volleyball, and basketball. Soccer is your favorite because Dad is the coach and the parents bring yummy snacks that you aren’t allowed to have at home. People will say that if you don’t play club by this age or that age, you don’t have a future in soccer. Those people are idiots. Enjoy these years with your favorite coach and your friends. Your time will come.

While in pretty much all other aspects of your life, “mother knows best,” but when it comes to soccer you should really listen to Dad. Although he never played the game himself, he is a true academic and has studied it in order to help you succeed. He will have countless ideas of how you can beat defenders and score more goals, and he will challenge you to try new skills, learn cool moves, and use both feet. He’ll drop anything he’s doing if you need help, whether it’s in the driveway, at the park, or on a beach while your family is on vacation. But he will never force you to practice. Ever. He will always leave your development up to you. While on one hand this may have contributed to your lack of technical ability, it’s also going to create a self-motivated and self-aware player whose sole reason for playing soccer is because she truly loves it.

This is one of your future college coach’s favorite quotes. Basically it means that if you work your ass off, good things are likely to happen. It’s not a guarantee, since there are definitely hard-working players who never make it. But I can certainly tell you that if you don’t work hard, you’re definitely not going to make it. So why not improve your chances? When you’re a senior in high school, the random British guy who’s coaching the junior varsity team will agree to start training you during all of your free periods so you can try to earn a starting spot as a freshman at Stanford in the fall. You are a nobody on all of the blogs, rankings, and polls, but this coach is willing to put in the hard work if you are. It will seem like a futile attempt — you will still be that same kick-and-run player, you just kick a little harder and run a little faster — but those countless hours on the field and in the gym will change you and your game. You’ll know what you want and you’ll be willing to do whatever it takes to get it. Within a year, you will be starting at forward alongside Kelley O’Hara at Stanford and playing in a FIFA Women’s World Cup. Oh, and that JV coach who will dedicate his time to you will go on to start Beast Mode Soccer and be known by players worldwide as one of the best technical development specialists in the game. 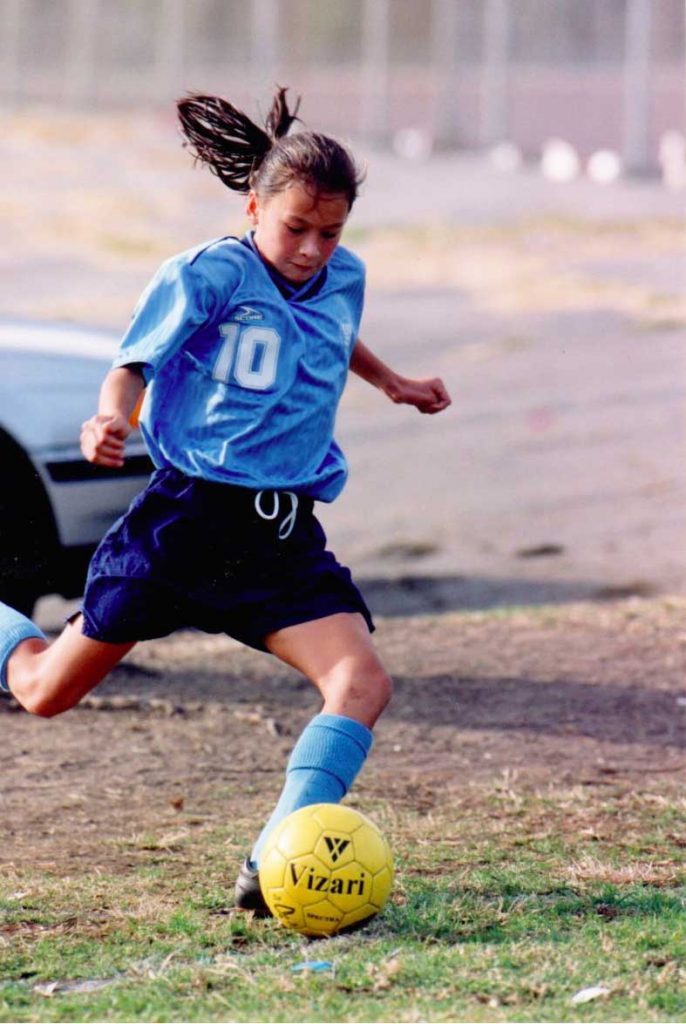 4. Not everyone loves women’s soccer as much as you do.

You just watched the Women’s World Cup Final at the Rose Bowl and it blew your mind. You don’t understand how people can say that women’s soccer isn’t exciting. You also don’t understand why your hero Brandi Chastain is being criticized for taking her shirt off after her penalty kick won the United States a World Cup — a goal celebration that men do all of the time at every level and nobody bats an eye. You don’t know if you want to play a sport in which men are so much more celebrated than women. This will be a constant struggle during your career, and I want you to be prepared to fight. Not just to keep your own dream of playing professionally and internationally alive, but for the right to equal opportunity for female players around the world. It will be an uphill battle. The president of FIFA will suggest that women play in tighter shorts to increase the popularity of the game. The 2015 Women’s World Cup will be played on artificial turf. Men’s soccer fans will say and write hateful things about you because women’s soccer doesn’t look exactly like their beloved game. Okay, I’m probably making you want to quit now, but I promise you it will be worth it when you see the slow but steady progress being made around the world.

5. Good things can come from something bad.

You’ll be devastated when you don’t make that club team this year. When you don’t make it next year either it’ll feel like the world is going to end. But it will actually get you to work so hard that when you do make the team you only play there for a hot minute before the coach recommends that you leave to play for a more competitive club. That new club will get you seen by Paul Ratcliffe, who will recruit you to play for Stanford.

One of your lowest moments will come in 2012, when the professional league in the U.S. folds. You will come close to giving it all up. But you will pack your things and move to Sweden to play in a city you’ve never heard of with a bunch of players you’ve never met. A three-month contract will turn into a nine-month contract, then a one-year, then a two-year, then a three-year contract. You will win championships, cup finals, and play with the best players in the world. You will become fluent in Swedish, buy an apartment in Sweden, and meet the love of your life (also Swedish). Sounds pretty good, right?

I guess this is what everything I’m telling you all boils down to, and if I could only tell you one thing this would be it:

Don’t give up on your dream to play club because that will lead you to one of the best soccer schools in the country and best universities in the world.

Don’t give up on your dream to play professionally because one failed league will not destroy your future as a pro, or the future of professional women’s soccer in the U.S.

Don’t give up on your dream to play internationally because you have a unique opportunity to play for two countries, and when one of them doesn’t call, the other one will.

Don’t give up the fight against gender discrimination because every voice helps and one day little girls will look to you to set an example.

Soccer needs you, and you need it. Not for wins or awards or money, but because it will teach you about teamwork, leadership, and sacrifice.

Soccer will shape you into the person you’re meant to be.