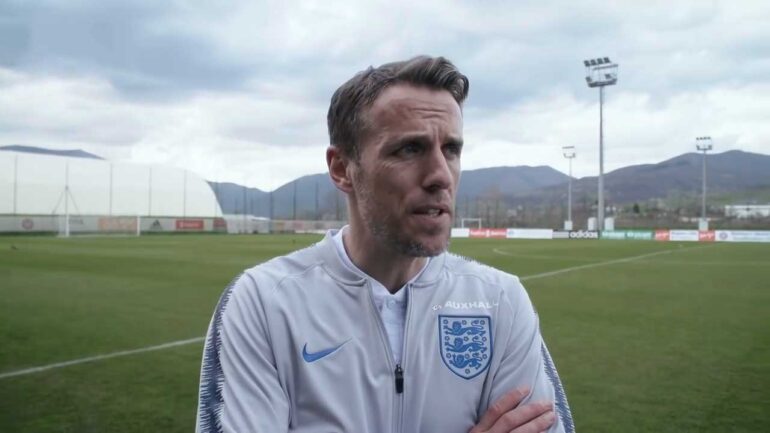 Phil Neville addressing the media.
[dropcap]E[/dropcap]ngland head coach Phil Neville says it wouldn’t be “ideal” should any player in his thoughts for a World Cup spot drop down a level for a season to play for Manchester United’s new women’s team.

United was accepted into the new FA Women’s Championship last week and is expected to be managed by Casey Stoney, Neville’s temporary assistant, who wasn’t on duty with the Lionesses at St. George’s Park this week.

With rumors swirling ahead of Friday’s World Cup qualifier against Russia that some players could be persuaded to drop down for a season in order for some long-term gain, Neville admitted players who did so would still be considered for selection.

“Is it ideal? No,” he said. “But what I’ve judged every player on is when I go and watch any team I watch them as an individual. If I go and watch someone in the Championship, I want to see their attitude and intensity.

“If I see their intensity level drops down they’ll not go to the World Cup. I’ve had situations this year where players maybe think because they’re not playing for a top FA WSL 1 team it’ll effect their chances of selection but I’ve told them, no, it won’t. As long as I see the same levels of concentration and quality, that’s what I’ll be judging them on.

“Is it ideal if they drop down? No, because I want them to play at the highest level but I’ll be judging them individually on their merits.”

Overall, Neville says the changes to the top tier of women’s football next season are “massively important” in regards to a fully professional league and when discussing the plight of Sunderland added clubs have to be at a “certain level.”

“It’s sad for Sunderland, for Mel [Copeland] and the players,” he said. “The league has had to make tough decisions and I don’t get involved in that. I think the league is getting stronger and it’s up to the clubs. It’s okay to say we’re sad but to get into that league, you’ve got to be a certain level and we’re hoping those teams stepping up will improve the quality.

“Man United, West Ham, and Brighton too. Brighton’s infrastructure is fantastic and West Ham have big plans. As an international manager, the teams that make me happy are the Readings and the Birminghams because I’ve seen them make the gap closer to the top three. It means the quality is getting deeper and the other teams need to make that step up. Those two are the two I’ve been most impressed with because they’ve gone toe-to-toe with the top sides.”

But the main attention now for Neville is Friday’s crunch qualifier with Russia in Moscow. England holds a two point cushion over Wales after five games while Russia are six points behind Neville’s side with a game in hand.

Defeat in Moscow would leave Russia and Wales on their tails despite 17 goals and none conceded during the five games under Neville and former head coach Mark Sampson so far.

“This week has been about focusing on where we want to be at the end of a long, hard season for the players,” said Neville. “Four sessions, six meetings, and one game of 90 minutes against a Russia side who will probably try and attack us a little bit more and that should allow us to play our game.

“They need a result because Wales have done so well and they play Wales after they play us. We need three points and so do they so it should be a good game.”

England beat Russia, 6-0, in the first game of the qualifiers back in September before Neville took over as head coach but he’ll have to go to Moscow without several players who featured at Tranmere’s Prenton Park.

Most prominent among those is captain Steph Houghton who pulled out of the squad on Monday to undergo knee surgery, something Neville suggests has been a long time coming.

“Steph’s been carrying this since the SheBelieves Cup, really,” he admitted. “We had a little camp last week and she wasn’t completely comfortable with how the knee felt so we took the decision. We weren’t sure she’d be fit enough to go to Russia so we looked at the big picture. We felt, and so did Steph and Man City, that the sooner she got her knee right, the better.

“She was really frustrated and upset because she missed SheBelieves and she feels as captain that she wants to be there but I encouraged her to get the surgery as soon as possible.”

Houghton isn’t the only player unavailable as a succession of injuries to regular squad members plus a U-23 friendly in Sweden this weekend left Neville only able to select 20 players for Friday’s match.

“It’s a bit to do with the Under-23 match but Steph’s injured, Demi [Stokes] is injured, Fara [Williams] and Jade [Moore] are injured, too. Leah [Williamson] has been called in while Aoife [Mannion] and Gabby [George] are going with the Under-23s. They’ve been in our squads but not had any action and they need to play international football.

“It’s frustrating for me that we’re picking up these injuries all the time but it shows the standard, intensity, and competitiveness of our league. Every squad so far we’ve had three or four pull-outs, I’ve picked my best squad but never had them at my disposal. It’s opened up opportunities for others. Had Steph never got injured then Abbie McManus wouldn’t have got her chance and she’s played in every game for me so far. In adversity, players step up to the plate.”

Aside from the players who have been given opportunities to be in the squad or at least train with Neville’s first team, other players have been given their chances in recent weeks in the shape of the U-23 squad and a mini two-day camp held last week for players to train.

“It was completely optional but every single player wanted to come. You have that feeling they’re enjoying it and we’re heading in the right direction.”

Neville added, “When I go to league games I look at players outside the group. We have a list of the contracted players but I want to widen the pool of players who can get into my squad. I watched Lauren Bruton for Reading against Chelsea and she caught my eye. I watched Chelsea versus Manchester City and Abbie McManus caught my eye. Lucy Staniforth at Sunderland has been given a chance, she trained with us here last week.

“Perhaps in the past it’s been too comfortable for players who know they’re coming in. Now we’re seeing competition for places and when we get that, the standard goes up. Those coming have been great and Aoife’s been outstanding. I phoned her after my first camp and said, ‘I’m going to get you in at some point.’ She’s fighting with some really good players but she’s been everything and more than I thought she would be.”

Mannion, George, and Co. won’t travel to Russia with the squad due to their commitments with the U-23 side but injuries have left Neville with thin options for Friday’s match.

Houston Dash striker Rachel Daly has been in top form lately in the National Women’s Soccer League (NWSL) but is likely to start at left back with Demi Stokes injured and Alex Greenwood suspended, while McManus will likely keep up her good record under Neville with Houghton out.

With a long season now behind the players and an international break placed right at the business end of the season in April, Neville admits he will take a closer look at how to manage the players this time next year.

“It’s the business end now,” he said enthusiastically. “It’s an important game and of our three remaining matches this is the one I see as most important.

“SheBelieves I found to be a massive tournament, the players saw it as their showpiece to play against the best. Next year we need to look at the April fixtures and ask, ‘Do we need them?’ We have to look at the players, what can we do to make sure they get the right coaching but prepared for the final stretch of the season. We have to make sure we get April right. SheBelieves looked after itself, it’s eyeballs out stuff. Everyone wants to play, big occasions are the benchmark for where you are.”

For the first time, Neville also made the frank impression that the FIFA world rankings don’t matter to him as much as previously suggested.

While the public message has always been about taking the Lionesses to first in the world under both Neville and Sampson, the head coach now admits they’re “not that important.”

“We need to win these three games and then we’ll think about the plan we put in place leading up to France,” he said.

“People make a big thing about the world rankings but you can be first and second, [and] if you don’t win a medal or a trophy then they don’t mean that much. It’s nice on paper but I want to have a gold medal at the Olympics, a European Championship trophy rather than just tell people we’re first in the world.”

[dropcap]K[/dropcap]ey to that success will be right back and continued stand-in captain Lucy Bronze. The Lyon star arrived at the team base on Monday after winning both the Division 1 Féminine and the UEFA Champions League in her first season in France and Neville couldn’t help but pour praise on the former Manchester City player.

“She’s a phenomenal player and I say to people I think Lucy could play in the men’s game,” he admitted. “She’s robust, determined, and has so much quality. I think going to Lyon has taken her game to another level. I say Lyon are like the Harlem Globetrotters of women’s football, she trains with the best players in the world every day.

“Marking [Eugénie] Le Sommer in training can only be good for her. I’m proud of her, I know all the girls watched the game against Wolfsburg and so did I. Toni [Duggan] won the cup on Saturday, too, in Barcelona. They’ve come back as winners and the more winners you have the more that spreads.”