After a Strong 2017 Spring Series, Arsenal’s Danielle Carter is Looking Ahead for Club and Country 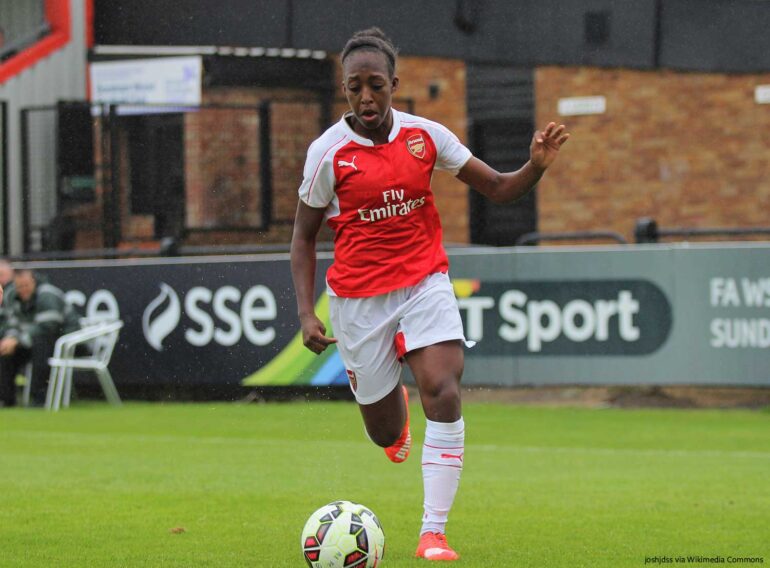 by joshjdss [CC BY 2.0], via Wikimedia Commons

Fresh from taking on a new role with the Football Association council earlier this year, 24-year-old striker Danielle Carter now only has eyes for making an impact against France on Friday night.

Off the back of another turbulent week for women’s football in England, attentions now turn to matters on the pitch as England looks to consolidate their first victory in 43 years against France at Euro 2017.

It’s the first time since the end of 2013 that England will walk out without sacked head coach Mark Sampson, with Mo Marley set to take charge of her first game as interim replacement for the 35-year-old.

“There’s a game we’re preparing for and that’s been in the forefront of our minds,” said Carter. “Everyone’s fully focused on the France game. We’ve had a good few days of training, it’s a similar squad, and we all know each other so we’re ready for the game.”

Marley confirmed this week she’s thrown her name into hat to do the job on a permanent basis, and the term interim does Marley’s vast experience a disservice.

The 50-year-old has been involved in the women’s game, as both player and coach, since 1988 and spent ten years as manager of Everton Ladies and has led England at U-19 level since 2001.

While the squad is almost identical to the last one picked by Sampson for last month’s opening World Cup qualifier against Russia, Carter could be forgiven for thinking a change at the top may help her Lionesses career in the long-term.

Despite consistent good form for Arsenal over the years, Carter has been restricted to just three caps so far. More impressively, Carter has six England goals, all of which came in two separate hat tricks against Estonia during qualification for Euro 2017.

“Mo hasn’t really changed the squad, it’s just a case of coming in, performing and doing what I can to make sure I’m regularly involved in the team.”

She added, “It’s always a target at any age to get to the World Cup, more so now I’m around the senior team. I want to be on the plane or the train or whatever way they go!”

Friday’s game against France may turn out to be more competitive than either of next month’s qualifiers at home to Bosnia-Herzegovina or Kazakhstan, but England will be keen to build on the summer’s win against France.

With Les Bleues also undergoing a managerial change since the Euro’s with Corinne Diacre taking over from the sacked Olivier Echouafni, it’s a chance for both new coaches to see where their teams are at.

“Any game against the top sides in the world is a big game, whether it’s for points or not,” said Carter. “It’s a friendly but we’re going to utilize the time we have and try and get as much out of this game as we can.

“Every time I get the chance to pull on an England shirt is an honor. I’ve only played a few times so far and not had the chance yet against top opposition, but if I get my chance on Friday then I’ll do my best and hopefully I’ll do enough to be part of the squad again next month.”

Carter may well get her chance with the news on Thursday morning that Fran Kirby is out of the game with a knee injury, but it’s a testament to England’s strength that they still have Carter available, along with Euro 2017 top scorer Jodie Taylor, Toni Duggan, Nikita Parris, Karen Carney, and Mel Lawley.

But Carter’s no stranger to competition, given she also has Beth Mead and Vivianne Miedema to contend with at club level.

“The better players you have in your team, the better you’re going to have to be because you’re playing against them every day. They’re pushing you to be a better player and ultimately you want the best team.”

Carter was one of many players to miss Euro 2017, the timing of Sampson’s early squad announcement in April meaning her dazzling Spring Series form went unrewarded.

Four goals as Arsenal went unbeaten meant little, and injury which meant she left the La Manga camp in January early meant Carter was always up against it to force her way into Sampson’s plans.

But the 24-year-old has brushed the summer off and is now looking ahead to the future.

“The squad was named early but I had to carry on playing, I couldn’t decide not to turn up because I wasn’t in the England squad.”

She added, “I had a job and a responsibility with Arsenal, I hoped it would be a case that after the Euros I could be involved because of the form I was in.”

On top of her club and country commitments, Carter now has a new role after being appointed as a member of The FA Council.

With issues off the pitch surrounding the FA dominating recent news stories in the women’s game, Carter feels it’s an important time to be able to put her voice across.

“I’ll be in meetings and able to get my view across. I’ll be able to put forward ideas on things that need changing and I do believe change is needed within football in higher places, especially in England. It’s a good chance for someone like myself to be in those rooms when conversations are going on to change the mindsets of people.

“It’s never happened where a current player, male or female, has been involved as a councilor. It’s new ground and it’s going to be different but I think a different perspective could be good and something they’re not used to.”