Jans Ready For Chances with Denmark and Man City 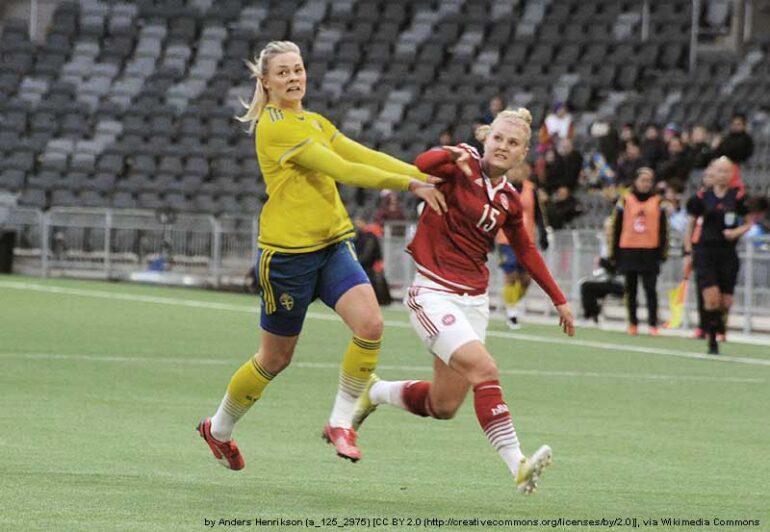 Most people probably heard of Mie Jans when she signed for FA Women’s Super League 1 champions Manchester City earlier this summer, but despite being just 23, she made her debut for the Denmark national team almost four years ago.

A center back, Jans will immediately become a valued squad member in Manchester once her Euro 2017 commitments are over, but is unlikely to waltz straight into the first XI at the CFA.

Cruelly, Jans was given a chance to shine when fellow defender Janni Arnth was ruled out of the tournament after the first game, only to pick up an injury herself in Denmark’s defeat to Netherlands last week.

“Hopefully I will get on the pitch again in this tournament,” said Jans — who may get a chance to play again after Denmark progressed to the quarterfinals on Monday night.

With a tough match against likely either Germany or Sweden lying in wait, Jans could be making the move to England sooner than she’d hope if Nils Nielsen’s side are knocked out at the weekend.

But Jans admits the thought of moving to such a prestigious club is an exciting one, whatever happens over the next week or so.

It will be a big change of scenery for the 23-year-old; she spent several of her younger years at Brondby before moving back there in 2014, where she would remain until Nick Cushing came calling earlier this year.

Jans obviously caught her new manager’s eye when Brøndby IF came up against City in Champions League last year, but the defender says the move didn’t come about straight after the encounter.

“It was a few months later, but when the interest came, it went really fast from that moment.”

Discussing her motivation to move, she added, “All the facilities were so much better than in Denmark. It’s a good opportunity for me to improve and become a better player.”

One position City aren’t short of both quality and quantity in is the center back role Jans will take up when the new FA WSL season gets underway in September.

Captain Steph Houghton has signed a new deal, and more recently so has Jennifer Beattie. With Abbie McManus and Megan Campbell also still at the club, City have a complete skill set for center backs.

But what type of defender can fans expect in Jans? The no-nonsense approach of Beattie, or the calmer, ball-playing presence of Houghton?

“I like to do both,” she laughed. “Mostly, I like to be on the ball and passing to other players, but I also like to tackle – it’s cool!”

A win in the quarterfinals could put Jans on a head-to-head collision with several of her future City teammates, but the defender already had the chance to impress when Denmark faced Mark Sampson’s side in a pre-tournament friendly.

“I spoke to Izzy [Christiansen] after the game against England but I haven’t met anyone else yet — I’m looking forward to that though.”