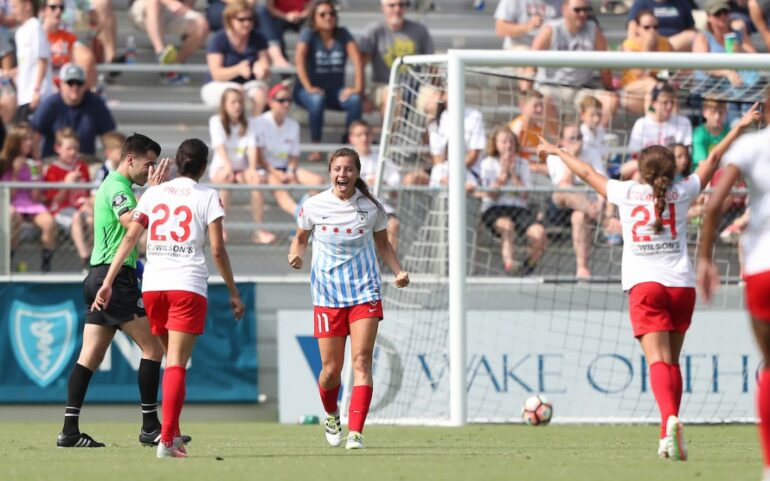 The Chicago Red Stars earned their first road win of the season with a 3-1 win over league-leading North Carolina Courage at WakeMed Soccer Park in Cary, North Carolina. It was North Carolina’s second straight loss but the Courage remain at the top of the National Women’s Soccer League (NWSL) table. Chicago moves to third place.

Goalkeeper Sabrina D’Angelo was called into action early, coming off her line in the 17th minute to deny Sofia Huerta who got a shot off from a cross played in from the right. Danielle Colaprico picked off a giveaway from Lynn Williams at midfield and hit Christen Press, who sent in a ball that split Abby Dahlkemper and Yuri Kawamura and put Huerta in on goal

The Red Stars would put the first point on the board in the 29th minute when Press converted a penalty kick after being taken down in the box by D’Angelo. Colaprico sent a ball over the top to Press, whose touch sent her in on goal. D’Angelo came off her line and tried to make a sliding save but Press got to the ball first and touched it around her.

Huerta would not be denied in the 37th minute after creating space and curling a sublime shot past D’Angelo. It was Press again in the mix, serving a ball into Huerta, who did well to bring it down in the box and send Dahlkemper one way with a step-over to create space. Huerta spun the opposite way and sent a bending shot to the far past to put the Red Stars up, 2-0.

Huerta makes it 2-0 for the Red Stars. We see you, Sofia. #NCvCHI pic.twitter.com/hiyirQ48Qc

Chicago was not done in the first half. Just before the halftime whistle, Huerta sent in a cross from the left that bounced through the box to an unmarked Alyssa Mautz making a run into space, who fired a point-blank shot on goal that D’Angelo saved. Mautz took the rebound and played the ball back into the center of the box. The ball bounced off a Courage defender to a waiting Vanessa DiBernardo, who slotted a low-driven shot to the far post to give the visitors a 3-0 lead.

D’Angelo with the initial save but DiBernardo is there to make it 3-0 for Chicago. #NCvCHI pic.twitter.com/NYmQYYUAvf

The Courage came out of the second half with Taylor Smith coming on for Rosana. Smith’s insertion added energy for the league leaders, who pressed to find a point to cut down the deficit. It came in the 55th minute when Jaelene Hinkle sent in a well-weighted cross from the left that picked out Williams. Williams brought it down and guided it past goalkeeper Alyssa Naeher to cut Chicago’s lead to two.

Naeher made a save in the 58th minute to quell the Courage comeback, diving to her right to knock Debinha’s shot out of play.

The Red Stars’ defense maintained the lead and earned their first road win of the season. They return home to face the Courage again on Saturday. The Courage, meanwhile, will face Sky Blue on Wednesday at home in the league’s first midweek game of the season before traveling to Chicago on Saturday.

Chicago’s Vanessa DiBernardo was subbed in the 69th minute after going down with an injury.