Thorns Rally from Two-Goal Deficit to Earn Draw against Breakers 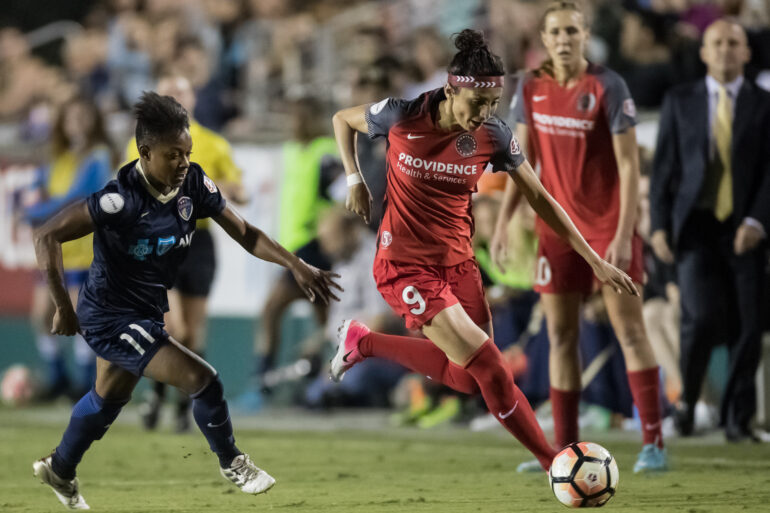 A brace from Nadia Nadim lifted the Portland Thorns FC out of a two-goal deficit to earn a point on the road against the Boston Breakers at Jordan Field in Boston, Massachusetts.

The draw moves Portland into second in the National Women’s Soccer League (NWSL) table followed by Boston in a tie for third with four more games to be played over the weekend.

The Thorns rolled into town with only four available substitutes on the bench, including perennial starter Allie Long, who was listed on the injury report as questionable with a right hamstring strain. Mallory Weber started in midfield in place of the injured Long. For the Breakers, Amanda Frisbie was unavailable due to illness.

The Breakers had to be organized and strong in defense from the start with the Thorns pressing the Massachusetts club for much of the first 30 minutes. The Breakers were content to look for quick turnovers to try to catch the Thorns on the counter and were otherwise content to possess in the back and be patient.

The tactic almost paid dividends in the 8th minute. Angela Salem sent a ball over the top from her deep-lying position. Defender Meghan Klingenberg was there but her touch was heavy and Julie King pounced on it and sent a ball between a defensive seam to Natasha Dowie on the right. Dowie went for goal with a strong shot but it hit the near post and bounced to the Thorns.

Boston goalkeeper Abby Smith made a key save in the 24th minute to keep the game scoreless. Smith had to fully stretch out to her left to deny Nadia Nadim’s right-footed shot from outside of the box.

The Thorns had a chance in the 30th minute to capitalize off a Megan Oyster turnover in midfield but Christen Westphal and Allysha Chapman tracked back to stop the chance from materializing. Chapman, in particular, made a recovery run from past midfield to the endline to disrupt the Thorns from getting a shot off Nadim took Oyster’s giveaway and slipped the ball out right to Weber making a run in toward goal.

Portland’s Adrianna Franch was called into action in the 32nd minute after Dowie’s shot took a strange bounce in the box and forced her to dive and push the ball out wide.

The game’s first goal came in the 38th minute. Boston’s Rose Lavelle sent the ball out wide to the left to Adriana Leon, who sent in a perfect cross that found Dowie. Dowie was left unmarked and occupied the space between the Thorns’ Emily Menges and Meghan Klingenberg, who was late in rotating over and let Dowie get in on the inside of her to head the ball past Franch.

Dowie puts Boston up, 1-0. That Leon cross tho. #BOSvPOR pic.twitter.com/LFS2YPWbpC

Boston was effective on the left side when it looked to exploit the speed advantage Margaret Purce had over Klingenberg.

Lindsey Horan was active all game long for the Thorns and seemingly everywhere but the lack of connecting between the lines that Long does was missed by Portland. Thorns’ captain Christine Sinclair and Hayley Raso, in particular, didn’t see much of the ball in the first half.

The teams went into the locker rooms with Boston leading in shots six to Portland’s two, and possession evening out after Portland’s high pressing.

Portland opened up the second half with more pressing but went down by two in the 48th minute. A long Julie King throw-in down the right sideline went to Dowie, who played the ball back to King. King played the ball into Leon, who attempted a backheel pass to Dowie; the touch was long but Dowie ran it down in the corner and did well to cut back on Klingenberg and create space to send in a cross. Rosie White was there to get a head on the cross and nodded it past Franch to the near post.

Horan took matters into her own hands to help cut the deficit to one in the 56th minute. On the sideline, Horan slipped the ball behind her that took a fortuitous bounce, split two defenders, dribbled into the box, and fired off a shot that hit Oyster’s hand. The referee pointed to the spot and Nadim stepped up and slotted the ball past Smith to make it 1-2.

Horan had a good look in the box in the 74th minute and sent a well-driven shot in on goal that forced Smith to punch the ball up and collect it for the save.

The equalizer came in the 83rd minute. Sinclair, deep in her own half to get the ball, played it to Horan, who chest trapped it and volleyed a gorgeous pass to Raso on the left. Raso drove toward the center and found Nadim, who was in-between the center back and outside back. She slotted the ball around an oncoming Smith to equalize.

Momentum was on the Thorns’ side but the Breakers regrouped and held on to preserve the draw.

The home-and-away series between the teams continues on Saturday, May 27, when Boston travels to Portland. Boston now sits at 2-2-2 while Portland is at 2-1-3.

It was the first tie in 12 meetings between the teams. Portland leads the series, 6-5-1.

The matched marked the first time Allie Long did not start a non-U.S. Women’s National Team match since 2014.