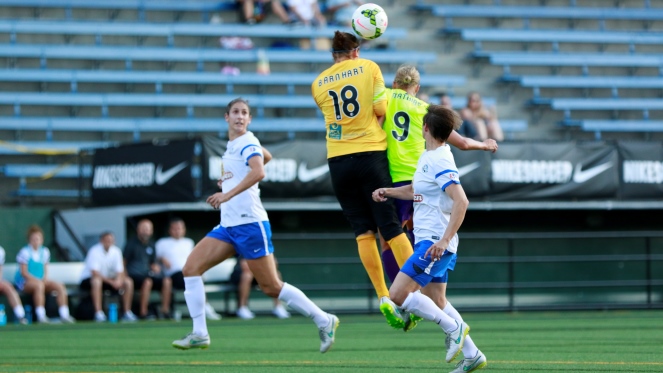 FC Kansas City and the Orlando Pride played to a 1-1 draw in front of 2,514 at Children’s Mercy Victory Field in Kansas City, Missouri. With the point, Kansas City sits at 1-2-1 while the Pride remain winless in the National Women’s Soccer League (NWSL) after four games and sit at 0-2-2.

The first true look at a goal for either team came in the 12th minute for Kansas City. Off a Yael Averbuch corner kick, the ball bounced out to Lo’eau LaBonta at the top of the box. LaBonta took it on the volley and launched it toward goal but it missed just wide.

Orlando worked will on the left side, looking to exploit Brittany Taylor. In the 21st minute, Kristen Edmonds found a sprinting Marta out wide left. Marta crossed the ball in to Danica Evans making the near-post run but the cross had too much on it and goalkeeper Nicole Barnhart was able to grab it.

The obvious speed difference between Taylor and Marta was a matchup problem and might have produced goals were it not for the defensive efforts of center back Becky Sauerbrunn, who was there on the night to disrupt Marta’s crosses into the box.

The teams went into halftime still deadlocked at zero. The Pride maintained roughly 53% of the possession and managed two shots on goal.

In the second half, Kansas City almost got on the board after LaBonta lofted a left-footed shot toward goal. Goalkeeper Ashlyn Harris attempted to make a play on the ball that looked to be heading into the goal but it hit the crossbar and bounced out, leaving Harris sprawling in the net. An Orlando Pride player got a foot on it but failed to clear the ball and it fell to Sydney Leroux at the top of the box. Leroux launched a right-footed strike far post but Harris recovered and made a diving save to keep the match scoreless.

The breakthrough came in the 73rd minute for Orlando. Edmonds fed the ball the second-half substitute Jasmyne Spencer who was checking for the ball at the top of the box. Spencer’s touch was a bit heavy but Marta was making a diagonal run and picked it up and with one dribble to her preferred left foot, launched a shot past Nicole Barnhart for her first NWSL goal.

Kansas City equalized in the 84th minute. Alanna Kennedy fouled Leroux just outside of the box, setting up a free kick for the Blues. Yael Averbuch delivered a scorcher that beat Harris but hit the post and rebounded out to Erika Tymrak who shot it but Harris made the save with her foot. Tymrak got enough on the rebound this time to find the back of the net.

Despite six minutes of stoppage time, neither team found the game-winner.