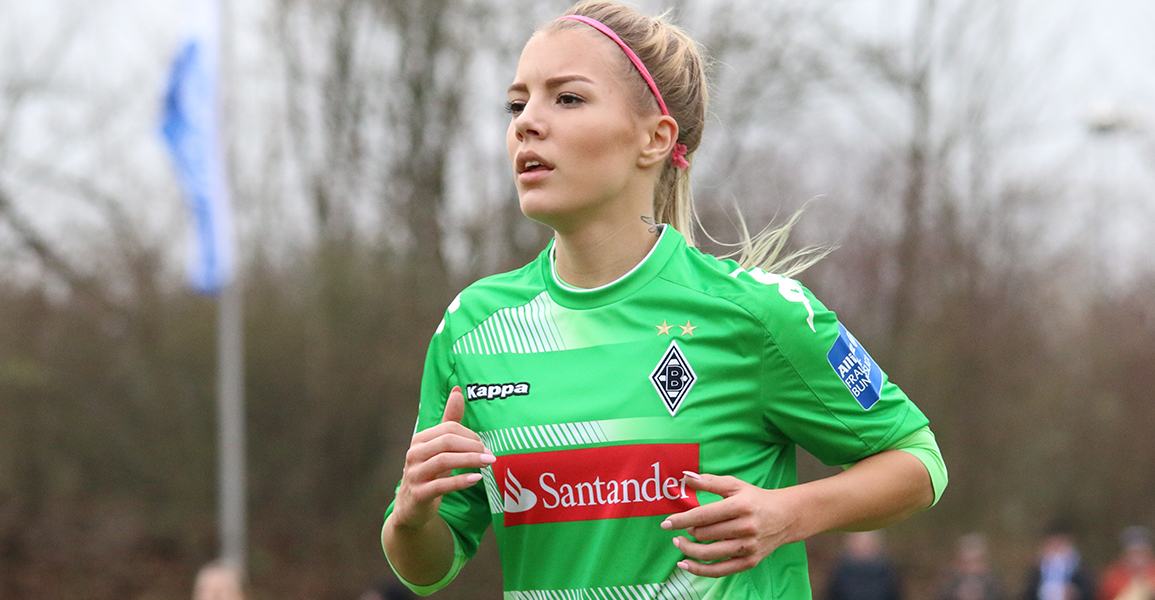 A lot of own goals on the tenth gameday of the Frauen-Bundesliga, one that was full of promising fixtures. Bayern München hosted Turbine Potsdam while VfL Wolfsburg welcomed SC Freiburg. Also, it was the first time MSV Duisburg and Borussia Mönchengladbach faced each other! We also take a closer look at two rescheduled games from gameday 9 that took place this week.

It would’ve been the ultimate chance for Borussia Mönchengladbach to keep some sort of connection to the “top” but an unfortunate own goal by former Duisburg player Vanessa Wahlen in the 82th minute leaves the guests with zero points after 10 tough gamedays. It was the first time both teams ever faced each other. A special “derby” in which Inka Grings’ team had the better start and generated a lot of chances, with Sofia Nati marking the deserved lead after just 11 minutes. Nati, who has been loyal to Duisburg since 2013, made use of confusion in Gladbach’s defense and managed to push the ball over the line. Just a couple of seconds before the referee could blow the whistle for half time, Nadja Kleinikel brought the important equalizer for the Frauen-Bundesliga newbie after an unchallenged header. It was an intense game and described as a true relegation battle. Both sides wouldn’t be able to afford a loss.

MSV Duisburg almost took the lead again in the 55th minute when “Die Zebras” already managed to beat Gladbach keeper Christina Bellinghoven but they failed to put the ball into the net. Mona Lohmann had the only real chance for the guests in the 70th minute after a cross by Kelly Simons. Good news for Duisburg: Lisa Makas finally made her official debut  in the blue and white shirt. The club signed the forward from SC Freiburg ahead of the season but the 24-year-old has been recovering from a torn ACL Great comeback for the striker as Duisburg took the lead again just shortly after she was subbed in. Wahlen failed to clear a cross and hit the ball into the own net. It was extra bitter if you consider the fact that Wahlen played for Duisburg from 2012 until 2014. Duisburg managed to climb up from eleventh to eighth place in the table and has some room to breathe now.

Sand coach Colin Bell described it as “the best game of their ongoing season.” It was indeed a dominant victory by Sand even though Jena put on a great fight in the beginning and had the first real chance in the seventh minute after a shot by Marie-Luise Herrmann. Sand were able to find a solution against Jena’s defense and forced them to open up space by playing quick and passing long balls to their strikers Jana Vojteková, Nina Burger, and Laura Feiersinger. Their conversion of chances wasn’t ideal though and they took too long to finish sometimes. Instead of just going for a shot, they overthought everything and ruined the chance. The long overdue lead came off a counter attack in the 38th minute when Feiersinger finished a lovely cross by Austria international Burger. Jena fought back in the second half and were able to position themselves in Sand’s half. But the odds worked against the guests this time as Isabelle Meyer increased Sand’s lead in the 75th minute after a beautifully placed shot from 30 yards away. And to top things, just one minute later Vojteková sealed the deal.

The long wait was finally over. The top fixture of gameday 10 sounded like a promising one and even though it was kind of boring and floppy by both sides in the first half, it turned into a real fight with Potsdam getting the upper hand and beating yet another top team in the Frauen-Bundesliga. After beating VfL Wolfsburg in front of their own fans a couple of weeks ago, Matthias Rudolph’s team also managed to beat Thomas Wörle’s team in the Gründwalder Stadion and strengthened their lead in the table. It was defender Johanna Elsig who brought the surprising lead for the guests after a free kick that was shot by Australian international Elise Kellond-Knight. We got to see quite a lot of standards during the game. It was a physical fixture which influenced the flow of play and made it less exciting to watch for fans. But Elsig’s goal brought fire into the game. The current reigning Frauen-Bundesliga champions were eager to mark the equalizer and tried their hardest, but that also opened up space for Potsdam. Inka Wesely almost increased the lead for Potsdam in the 56th minute after a standard.

Just two minutes later it was Nora Holstad who marked the 2-0 lead for Turbine Potsdam by steering the ball into their own net after Svenja Huth brought the ball into the area. Wörle’s team wanted to answer instead of giving up and it worked: Verena Faißt brought in a cross into Potsdam’s penalty area where goal scorer Elsig was in a 1-v-1 duel against Dutch international Vivianne Miedema. What seemed to be Miedema’s goal now counts as an own goal by Elsig. But it didn’t matter anymore as Potsdam were clever enough to save the lead over time and collect another important three points.

Hoffenheim finally collected a point after three straight 1-0 losses. And what a big draw that is! Frankfurt were up 2-0 but let it slip out of their hands. Laura Störzel and German international Mandy Islacker scored both goals within two minutes of one another (26th and 28th minute). It’s a nice confidence boost for TSG Hoffenheim that they were able to recover from the brace and actually mark the equalizer. Leonie Pankratz hammered a shot into the net with her left foot in the 52th minute. The goal influenced the whole team and Hoffenheim became more dominant, invested more into the game. Christine Schneider equalized in the 70th minute with Kristin Demann giving the assist. The first round of the Frauen-Bundesliga has been full of ups and downs for Frankfurt and you eventually have to question their mentality. They have already proven that they have the strength and will to win and draw against the big teams of the league, so this draw will most likely feel like a loss to them.

Rough defeat for Leverkusen in the last home game this year. Lisa Schwab brought the early lead for the hosts in the third minute. It was the first shot on goal and it went in from 25 yards away. It was a beautiful goal that gave Bayer Leverkusen hope. Essen upped the pressure on Bayer Leverkusen who were superb and didn’t make it easy for Daniel Kraus’ team. But the gap in quality became more obvious as the game went on and Essen got one back in the 31th minute when Nicole Anyomi overran Leverkusen’s defense and didn’t leave goalkeeper Anna Klink a chance. It was Anyomi again who brought the lead for Essen shortly after the second half began. Manjou Wilde increased to 1-3 in the 55th minute. Leverkusen seemingly lost control and it became even more difficult when Jessica Wich was sent off after collecting her second yellow card. Irini Ioannidou converted a penalty in the 84th minute and striker Charline Hartmann made it 1-5 for Essen in injury time.

The Wolves were put on the spot and had to win this one to keep the title and Champions League qualification vibes alive. Some of the performances this season haven’t been as promising and overall Ralf Kellermann’s team is not placed where they should be. Their aim is to claim that Frauen-Bundesliga title again but now they have to chase rivals in Berlin and Turbine Potsdam, who keep dominating the league. The club recently announced that Swiss striker Ramona Bachmann is set to leave at the end of December and switch to the FA WSL, where she has signed a contract with Chelsea Ladies. SC Freiburg, on the other hand, had nothing to lose this season and has been dominant and promising so far. Jens Scheuer’s young team is strong enough to anger the “big guys” and has proven that more than once already. Kellermann’s team certainly didn’t have an easy task ahead of them but Lara Dickenmann’s goal in the 26th minute was enough to secure three important points for Wolfsburg in their last home game. The second half wasn’t as one-sided as the first meeting and Freiburg put constant pressure on Wolfsburg. But “Die Wölfinnen” were able to keep their cool and defend with passion, keeping the first clean sheet since October where they drew against Frankfurt.

Potsdam beat Bayern München in an impressive way while Leverkusen fell short to SGS Essen last weekend. Not an easy task for Thomas Obliers’ team as Turbine Potsdam remain as confident as ever. Good news for the newly crowned autumn champions: German international Tabea Kemme has extended her stay in Berlin for one more year until 2018. Kemme has been outstanding for Potsdam this season so far after switching positions from defending to striking. The 25-year-old has scored five goals so far. And she started against Leverkusen on her birthday. What better way to celebrate a birthday than with a contract extension and win? But playing two games within a few days also influenced the game. Felicitas Rauch converted the only real chance Potsdam had during the game in the 38th minute. Potsdam was dominant but couldn’t increase the lead while Leverkusen tried their hardest to move forward. They couldn’t reward their effort though and remain in the relegation zone.

Die Wölfinnen claim the second spot in the table after a 2-0 away victory over SGS Essen. Shots on goal were rare in the first half with both teams playing very defensively. But the Wolves managed to take over control over time and became more confident in their build up. Anna Blässe’s header got cleared by Lisa Weiß in the 31th minute — close call! The second half was more intense and Essen tried to fight back. It’s well known that they can put a lot of effective pressure on their opponents. Both teams could’ve easily marked the lead but it was Ralf Kellermann’s team who forced through. Zsanett Jakabfi’s free kick eventually found Weiß who knocked the ball against the crossbar but Wolfsburg captain Nilla Fischer was perfectly placed and headed the ball into the net. The Hungarian international sealed the deal and important victory just a couple of minutes later. Jakabfi with a great overview in the six-yard box and no chance for Weiß — 2-0 to the Wolves, who are now back in a Champions League spot.