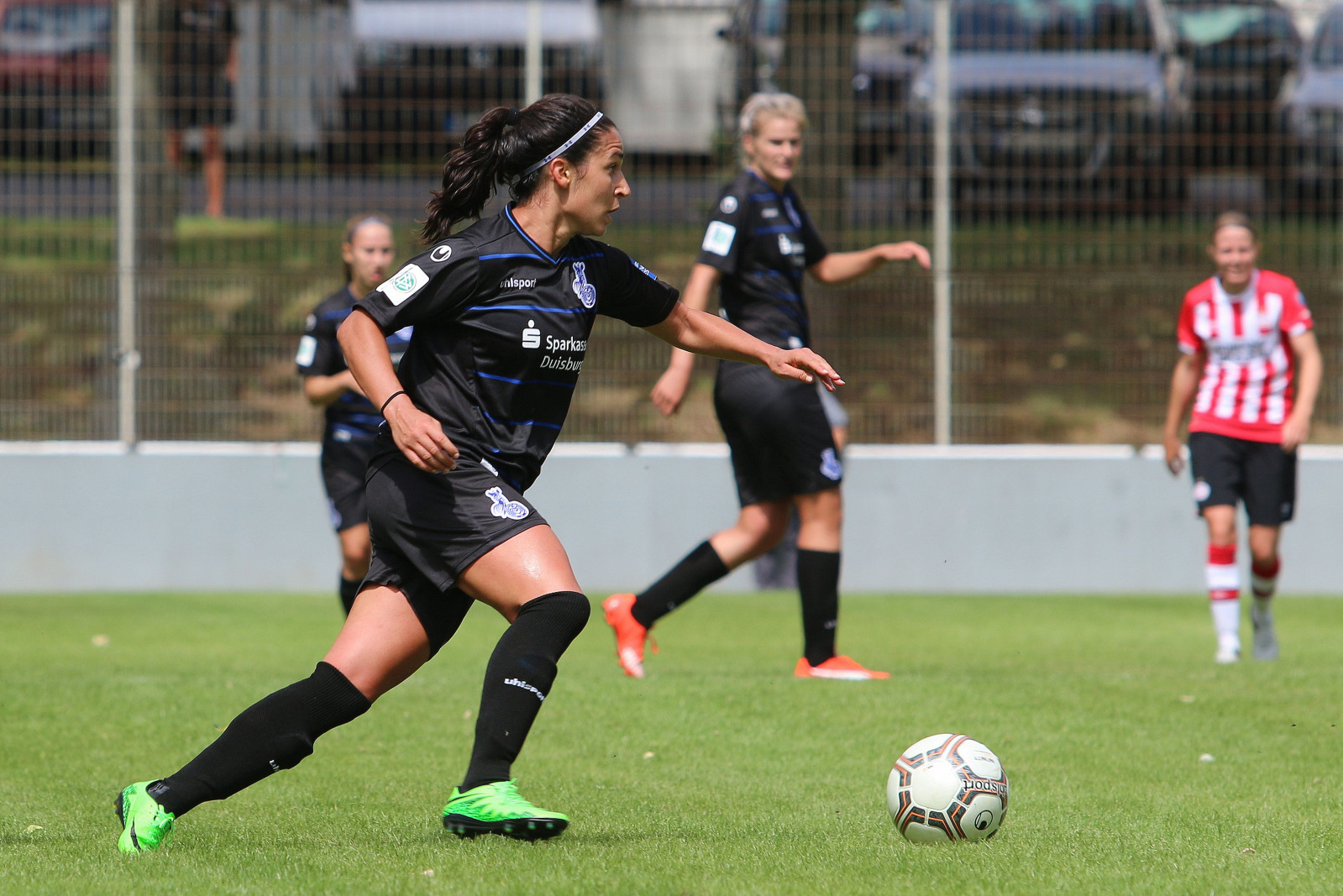 Sorry I’m late with my weekly review, but better late than never, right? Frauen-Bundesliga gameday 4 went underway last weekend and even though most results were predictable, there’s still a lot of stuff to point out and discuss. I was at the AOK Stadion in Wolfsburg again to watch VfL Wolfsburg host newly promoted MSV Duisburg and let me tell you, it wasn’t was as easy for “Die Wölfinnen” as many expected! Let’s quickly take a look and review all the results.

I ended last week’s review with the sentence: “You can only question why Frankfurt weren’t able to react and show this kind of ambition earlier.” Facing a team like SC Freiburg after a weak showing against SGS Essen certainly doesn’t sound too promising but Frankfurt stepped up their game this time and were able to force a goalless draw against Jens Scheuer’s team which is indeed a huge result! Freiburg are the up-and-coming team of the season while Frankfurt are in the middle of radical changes (lost a lot of key players and then there’s the ongoing process of trying to integrate and focus on young talents). A deserved draw in an even game in which both teams had plenty of good chances. Frankfurt was without Ana Maria Crnogorčević, who was diagnosed with glandular fever and will be out for an unspecified time. Huge bummer for Frankfurt! No return date set for the Swiss forward who has dealt with that tough illness before. On behalf of OGM we would like to wish her a speedy recovery!

On a more positive note, you could definitely see an improvement in Frankfurt’s style of play: they acted more aggressive in 1-v-1 duels, seemed more stable with their passes, and had more lively offensive play. Freiburg, on the other hand, proved once more that they have one of the best goalkeepers of the league in their roster. Laura Benkarth neutralized a lot of Frankfurt’s chances. Both teams eventually speculated on a “lucky punch” but at the end of the day, the draw was deserved for both teams. Frankfurt can be proud of their performance and have definitely gained more confidence after that showing. Freiburg’s unpredictability has been missing against Frankfurt but they gladly take the point.

A real family duel: new German international Linda Dallmann welcomed her sisters Jule and Mona Dallmann, who both play for newly promoted Borussia Mönchengladbach. The emotional part of the game most likely outweighs the 3-0 loss for the sisters. Charline Hartmann collected her first brace of the season and Kozue Andó put her name on the score sheet for SGS Essen as well — a beautiful backheel goal! There are only two points of criticism: Essen weren’t able to find a solution against Gladbach’s deep defending in the first 30 minutes. And Jacqueline Klasen almost caused a penalty before halftime. Other than that, it was a safe victory for Essen who only gave Gladbach the chance to score once besides the almost penalty but Madeline Gier failed against Essen goalkeeper Lisa Weiß. Essen were the dominant team throughout the game and performed well in front of 1,239. Ten points after four games also marks a new record for Daniel Kraus’ team! Essen have never started more successful into a Frauen-Bundesliga season.

“Spitzenreiter!” as we call it in Germany. What a start for Matthias Rudolph and his team who continue to lead the table in the Frauen-Bundesliga after gameday 4. Four games, 12 points — what more could you possibly ask for? Colin Bell’s team suffered their first loss of the season and conceded the first goal. Sand had the better start to the game and managed to earn quite a few chances, which was the result of Potsdam being very nervous at the beginning and playing a lot of wrong passes. But the Berlin club was able to turn it around in the second half and it was Anna Gasper, who scored the only and deciding goal in the 64th minute for Potsdam six minutes after she got subbed in. Rudolph spoke to his team after the hard-fought victory and told them how proud he is of them. It’s important that a team actually feels like a team and works like one, something Potsdam has been lacking these past few seasons. Drop of bitterness for Potsdam though: captain Johanna Elsig was subbed out in the 89th minute after she got injured. There’s no official update yet but it’s worrying considering the fact that Elsig has just returned after being out for a very long time due to torn ACLs.

A much needed victory for Hoffenheim, who finally collected their first three points after three straight losses. Also notable: it is the first victory against Jena ever! A confidence boost that could’ve easily been the other way around though. Jena had the better start into the game while Hoffenheim had trouble with the general buildup of their game and failed to draw attention to their offensive players. Christian Franz-Pohlmann’s team put a lot of pressure on Hoffenheim, who somehow managed to fight against it and not concede. The lead for Jena at halftime would’ve been deserved. But it doesn’t matter if you’re the better team or not, if you don’t score, you don’t win. Hoffenheim paid attention to Jena’s play and got the lucky punch. Judith Steinert caught an errant pass by Jena in the 69th minute, ran forward and took the risk with a shot from 20 meters, and GOAL! The lead for Hoffenheim influenced the mood with the proceedings getting more hectic and aggressive. A couple of minutes later Laura Luís smashed the ball into the net to equalize but the goal wasn’t given to them. Czech international Lucie Voňková was sent off in the 79th minute after receiving two yellow cards within two minutes. It’s the little things that decide a game sometimes and Jena were their own worst enemy in this fixture.

A corner makes the difference! An early goal by United States defender Gina Lewandowski in the 22th minute sealed the 1-0 away victory for Bayern Munich in Leverkusen. I personally didn’t expect such a tight result but it’s good for Leverkusen, who seem to have improved their defensive work. Thomas Obliers made a change ahead of the game and put Lena Schrum in as central defender alongside Annike Krahn. They put forth a very solid defense against the current reigning Frauen-Bundesliga champions. Bayern Munich had trouble breaking through the defense and it was Leverkusen who had the first big chance of the game after 10 minutes. Nina Ehegötz lost her nerves in a 1-v-1 against Bayern keeper Tinja-Riikka Korpela and her shot missed the goal. Leverkusen’s effort throughout the game didn’t get rewarded, though, and they still haven’t scored a single goal after four games. But if you can tame a team like Bayern Munich for long, you should certainly be able to win games. The season is young and Leverkusen seem to be progressing. It will be interesting to see if they can get back on track soon. Every point counts and so far they have zero.

A cold and rainy day in Wolfsburg but as always, I was looking forward to seeing Wolfsburg play. And Duisburg. Duisburg, who used to be one of the most dominant women’s football clubs back in the day (FCR Duisburg). Finally back in the Bundesliga and finally back in Wolfsburg! Alexandra Popp and Luisa Wensing (currently recovering from a broken leg) used to play for FCR Duisburg, alongside Inka Grings, who is now the coach of MSV Duisburg. Yes, it was definitely a special game. And Duisburg didn’t make it easy for Wolfsburg! They defended deep with most of their players in their own half, with either Lee Falkon or Sofi Nati staying up top looking for chances to counter. Wolfsburg managed to find solutions every now and then and broke through the defense but it took them 30 minutes to mark the lead. It was Zsanett Jakabfi who broke through — who else? One thing I noticed: Wolfsburg had a total of 12 corners in the first half but failed to turn any into a real threat or score a goal.

Duisburg coach Grings was very loud during the game, giving her team praise for every 1-v-1 duel they won, for every pass that eventually reached the right teammate. I liked that. What I also liked: Ralf Kellermann finally gave his young talents some playing time. Tessa Wullaert and Ewa Pajor were inserted in the second half and swirled up Duisburg’s defense. Poland international Pajor even had a good chance to collect her first goal of the season but decided to pass the ball instead of taking the shot. That’s another thing I’d criticize: take the shot; Wolfsburg passed and wasted a chance. Popp sealed the deal in the 89th minute though and took a cross-volley to mark the 2-0 lead. Duisburg goalkeeper Lena Nuding probably played the best game of her career so far and made several great saves.