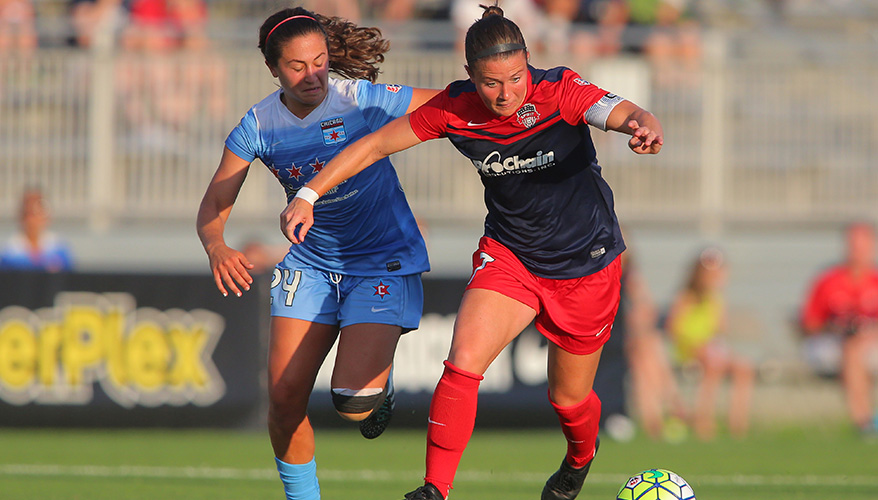 What Had Happened Was

The Spirit lead the all-time series, 6-3-1. This year, the teams met twice with each team taking its home fixture. In 2014, the Spirit swept the series with a pair of 1-0 wins and a come-from-behind 2-1 victory.

Same but different is the name of this game. Both teams are looking to move beyond the semifinals for the first time. Both teams have pace in defense and attack. And both squads play a very team-oriented game though they approach it in different ways: Washington doesn’t rely on any one individual while Chicago relies on sets of pairs.

The Spirit are limping into semifinals after a two-game skid, including a loss in the regular season finale to the Red Stars, 1-3. Washington had the opportunity to win the NWSL Shield outright in its second-to-last game against Seattle but dropped that game on the road, 0-2, in a listless affair for a team that has been consistent all season long. The Spirit had another opportunity to claim the Shield against the Red Stars but had a terrible showing in Chicago and let the Shield slip away, falling 1-3.

The Red Stars don’t exactly come into the semifinal firing on all cylinders either. The Red Stars’ 3-1 win over the Spirit is its sole win in September after draws against Seattle and Kansas City, and then another loss to Kansas City at home.

But all that changes now. It’s a clean slate, a fresh start. Oh, and it’s win or go home.

Head coach Jim Gabarra has experimented of late, ostensibly to rest players, and the team’s results reflect that experimentation with lackluster performances that are in stark contrast to the flowing team game the Spirit have displayed this season. But as Gabarra said in a conference call, the Shield wasn’t one of the three goals the team had this season. Of the three, the Spirit have accomplished two: a playoff spot and hosting a playoff home game. The third? The championship trophy. That goal, though, is still very much too be determined.

How the Spirit Will Win

Something about defense winning championships. The Spirit have a tried and true defensive unit that is stingy. The back line has allowed 19 goals through 20 games. And the Spirit are scary good at home, conceding only five times in 10 home games.

This is a squad that doesn’t rely on one player but rather relies on possession and balance to lull opposing defenses to sleep. When on their game, the Spirit can play some of the most beautiful soccer we’ve seen.

To win, the midfield must contain the chances DiBernardo and Colaprico create in the attack. Tori Huster will have to continue her unheralded play in front of the back line and look to start the attack. And Washington has to convert on its chances, something lacking in its final two games.

How the Spirit Will Lose

Pressure. The Spirit just haven’t gotten it done when it counted: two semifinal exits not to mention letting the Shield slip away this season. While their team-oriented game is terrific, not having a go-to player can be problematic, especially if the Spirit concede early. Then the pressure mounts Crystal Dunn has just two goals this season playing in a different role for the squad but would it disrupt team chemistry to ask Dunn to change her game this late in the season?

Player(s) to Keep an Eye On

Diana Matheson has been curiously quiet this season. Or maybe overlooked with the play of her midfield compatriots. The Spirit will need Matheson’s smarts to keep the Red Stars’ midfield at bay and defense on its toes.

Washington will want to control the game and keep the ball away from Christen Press as much as possible. That’s a task much easier said than done with the play of Danielle Colaprico and Vanessa DiBernardo in Chicago’s midfield. The Spirit can’t give the Red Stars the time and space they did in their last match or Press and Co. will make them pay.

Matheson has been curiously quiet and Jo Lohman had such a great start to the season and has been quietly the Spirit’s most consistent player.

If Washington is all about the team game, Chicago is all about its duos. The Red Stars feature a dynamic tandem in each line: Arin Gilliland and Casey Short bookend a defensive line and get into the attack with pace; Colaprico and DiBernardo may be the best midfield 1-2 punch in the league (imagine a U.S. Women’s National Team with a destroyer and playmaker in the correct roles, go on); and Press and Sofia Huerta are still learning to play together but are deadly.

How the Red Stars Will Win

Colaprico and DiBernard. Thunder and lighting. Too much? Yeah, probably, but it works in my head. It will be up to DiBernardo to continue her playmaking, finding the seams in Washington’s defense and feeding Press and Huerta while Colaprico cleans up in the midfield behind her.

Press needs no introduction. If given even a thought of a goal, she’ll make defenses pay. If Washington shows the defensive lapses it did in the regular-season finale, it will be just too easy for DiBernardo and Co. The Red Stars would do well to attack the Spirit’s left side.

How the Red Stars Will Lose

Despite Gilliand and Short, and the presence of USWNT national teamer Julie Johnston in the middle, the defense of Chicago has had some Arsenio-Hall-make-you go-hmmm moments this season. When Chicago’s defense is bad, it’s bad. The Red Stars are fortunate to have Alyssa Naeher backstopping the team and she’s been her usual Naeher self, but it’s the playoffs and there can’t be lapses of any kind, especially with Dunn lurking around the penalty area. There is no tomorrow.

Player(s) to Keep an Eye On

Cara Walls. She’s been quiet but has come on of late to add to the Red Stars lethal attack. With the bulk of attention paid to her teammates, Walls made the most of her start by scoring the game-winner against Washington the last time these teams met.

Chicago will look to open up the game. A high-scoring game favors the Red Stars. Chicago’s midfield will look to press Washington’s midfield and put pressure on the back line as it did in their 3-1 win last week. Getting Press the ball is always a good option and if DiBernardo is finding openings in Washington’s channels, it will be a long night for the Spirit. The Red Stars will want to score early to make the Spirit chase the game. If they can do that, the Red Stars will advance to their first final.