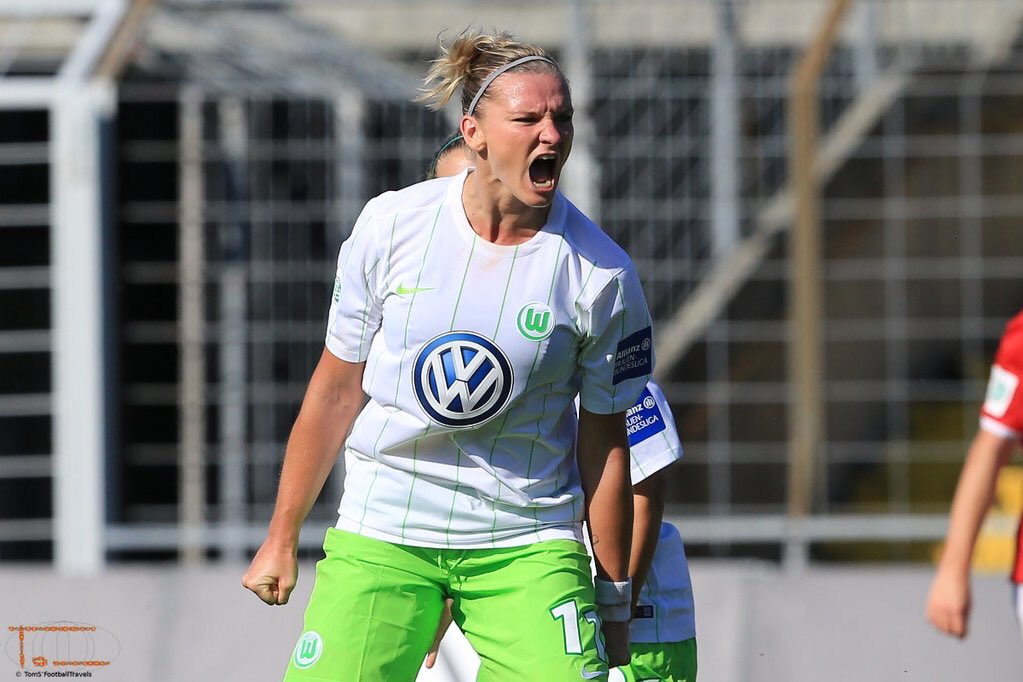 The action in the Frauen-Bundesliga doesn’t stop. Exciting games yet again: We had Turbine Potsdam clash with FFC Frankfurt on gameday 2, and gameday 3 kicked off just as well with Bayern Munich hosting VfL Wolfsburg — a fixture that has turned into a determined prestige duel over these past few years with Bayern mostly getting the upper hand. Bayern are the current title holders with Wolfsburg constantly being the runner-ups. The last time Wolfsburg beat “Die Bayern” was back in April 2013. But every streak eventually has to come to an end, right? Let’s take a closer look at the fixtures.

Ninety emotion-packed minutes and lots of good chances for both teams. A game that went back and forth and could’ve ended either way, but the Wolves were finally able to break the streak. The last time Wolfsburg beat Bayern was on April 17, 2013, with Martina Müller and Viola Odebrecht scoring the goals for the green side. Since then, both clubs have faced each other six times. But the treble winners of 2013 were never able to get the upper hand — until now.

It was Lara Dickenmann who brought the lead for the Wolves after 33 minutes. Alex Popp forwarded a cross by Sara Björk Gunnarsdóttir to Dickenmann, who took it as a volley – a lovely goal. I’ve criticized the lack of creativity in Wolfsburg’s play a lot recently but this was great to look at; everything seemed way more organized. I strongly believe that the personnel changes influenced the performance. Starting Popp instead of Anja Mittag was the right decision because Mittag still needs time to adapt. Head coach Ralf Kellermann also let a more offensive player start with Anna Blässe instead of Élise Bussaglia. The team had ideas, attacked early, put pressure on Bayern’s defense, and improved their own defending. Bayern were forced to defend deep. But they still had quite a few chances in the first half too with Vivianne Miedema probably missing the biggest one. They managed to turn it around in the second half though and tested Wolfsburg’s defense a couple of times. A corner in the 70th minute found Miedema who headed it into the net. Nilla Fischer was unable to defend against the Dutch international. It was a well-deserved equalizer for Bayern who went into full attacking mode after that. But just five minutes later Wolfsburg picked up a wrong pass and initiated a fast counter attack. Popp with the ice cold finish and a 2-1 lead for Wolfsburg.

Good news: Julia Simic finally made her return for Wolfsburg after being out with an injury since April. Kellermann said on the club’s homepage that this victory was not only good for the table, but also “for the heads” while Bayern head coach Thomas Wörle paid his respect to Wolfsburg and congratulated them on a “deserved win.”

I have mixed feelings about Frankfurt’s last-minute draw against Essen. Nobody expected this game to be easy considering Essen seem to be one of the up-and-coming teams this season. Frankfurt made a lot of mistakes in the first half, inviting Essen to take control of the game. And even in the second half not a lot changed. Daniel Kraus‘ game plan was to have a lot of possession, put pressure on Frankfurt, and to keep the spaces tight — it worked. Frankfurt were not able to free themselves. Desirée Schumann made her first start for FFC this season and it was one to remember, but perhaps not in a good way. One of her attempted rescues in the 59th minute landed in front of Sara Doorsoun, who took the risk and smashed the ball into the net from 40 meters away.

Frankfurt’s lack of creativity is alarming. Essen were the dominant team throughout the game and had a lot of chances. Lea Schüller even increased the lead for Essen in the 88th minute. According to the club, fans started leaving the stadium early. But they probably regret that because Frankfurt scored two goals in injury time: Swiss international Ana-Maria Crnogorčević and Yuki Ogimi were the heroes of the night. But here’s the thing: While I believe that this comeback shows great moral, you can only question why Frankfurt weren’t able to react and show this kind of ambition earlier.

Shocking news made its round during the international break: Duisburg goalkeeper Meike Kämper tore her ACL during training with the German national team and will be out for six-plus months. A true bummer for the club and Kämper, who I believe is a strong and talented young goalkeeper.

I was kind of afraid that this tough injury would influence the whole team but I was also aware of the fact that Lena Nuding is a great goalkeeper as well with Bundesliga experience. No surprise that MSV coach Inka Grings let her start against Jena. But that’s not the only change. A whole new defense was lined up: Virginia Kirchberger and Yvonne Zielinski were put on the flanks while Linda Bresonik and Rahel Kiwic started as central defenders. Sofia Nati was put up front and Lee Falkon supported her on the left wing. And it looks like the hard work during the international break paid off. Bresonik put her team up with a wonderful direct free kick in the 24th minute. An important goal for the newly promoted team. Only a couple of minutes later Kirchberger took a shot in the penalty area and marked the 2-0 lead for Duisburg. Two goals in the first half — a good confidence and assurance boost. Two important factors Grings‘ team has been craving.

Duisburg focused on counter attack and defending the lead in the second half. Jena tried to react by changing tactics in the second half but it didn’t help, even though Franz-Pohlmann‘s team had the better start and a couple of changes, Duisburg took them by surprise and they couldn’t find a solution. Nati sealed the deal in the 64th minute and collected her first goal of the season. Laura Luis‘ goal for Jena in the 76th was a reaction – but way too late.

Freiburg coach Jens Scheuer made only one change ahead of the game: striker Hasret Kayikci was given a break and Sandra Starke got the start instead. Both teams had chances in the first half and were willing to play offensive football, but the half-time score stayed 0-0. The game got exciting in the last half of the second half when Hoffenheim surprisingly took the lead. Fabienne Dongus scored Hoffenheim’s first goal of the season and gave them hope for a short amount of time. New German international Kayikci was brought on in the second half and it was a change that paid off – the talented forward marked the equalizer just four minutes after Hoffenheim went up front. And as if that wasn’t enough, Kayikci scored the winning goal for Freiburg in injury time. Zero points for Hoffenheim after three games is not a good start and definitely worrying for all involved considering how much potential the team has. Freiburg, on the other hand, have proven once again how crucial they can be.

Taking beby steps, that’s what new promoted Gladbach are doing. After the 8-0 smashing on gameday one, they lost, 1-0, on gameday 2. That’s an improvement and hosting Turbine Potsdam on gameday 3 certainly isn’t an easy task. But the team managed to make a step forward though. New German national team coach Steffi Jones was in attendance for the game – lovely gesture. Forward Kelly Simons made history and scored Gladbach’s first Frauen-Bundesliga goal just 14 minutes into the game. A great solo effort by Tiffany Cameron got rewarded with Simons finishing it. It was also the first goal Potsdam conceded so far. Yes, the season is still young but that’s still quite an accomplishment for Gladbach. And Gladbach didn’t make it easy for Turbine. They played very compact 4-4-2.

But that’s when Turbine woke up and quickly reacted. A double by Svenja Huth and on from Tabea Kemme turned the game around before half time. Matthias Rudolph’s decision to play Kemme up front was probably one of the best decisions he could have made – she gets along with Huth well and both seem to be the new duo every team should fear. And I’m glad, for Huth and Kemme. Huth can finally embrace her full talent and Kemme can make use of her offensive qualities. Borussia’s Sandra Starmanns got sent off after collecting her second yellow card in the 74th minute and it was Kemme again who increased the lead for Potsdam shortly after. While “Die Turbinen“ remain self-critical, Borussia officials are optimistic. Another very promising showing against a rather weak Potsdam. But still, I’m glad to see Turbine Potsdam are getting back on track. If they keep working hard like they do, they will be able to challenge the top teams and perhaps play a good role this season. Rudolph took risks, made changes, and the results are coming.

Sand had to compensate for quite a few injuries: Jovana Damnjanović and Laura Vetterlein were both unable to compete. Silvana Chojnowski was suspended after receiving a red card in the last game. Verena Aschauer, Jana Vojteková, and Furtuna Velaj replaced them. Change that influenced the game: it took Sand quite a while to get into the game. Colin Bell’s team lost the ball a lot, made mistakes in the buildup which resulted in Leverkusen attacking and creating chances. The problem, though, was Leverkusen’s failure to finish their chances. Thomas Obliers‘ team hasn’t scored a single goal yet. They were able to defend and keep a clean sheet until the 72th minute. Sand’s Isabelle Meyer scored with a direct free kick and Dominika Škorvánková made it 2-0 in the 90th minute. Leverkusen tried – they invested a lot, made the runs, created chances but if you don’t score, you can’t win. That’s how the game works.