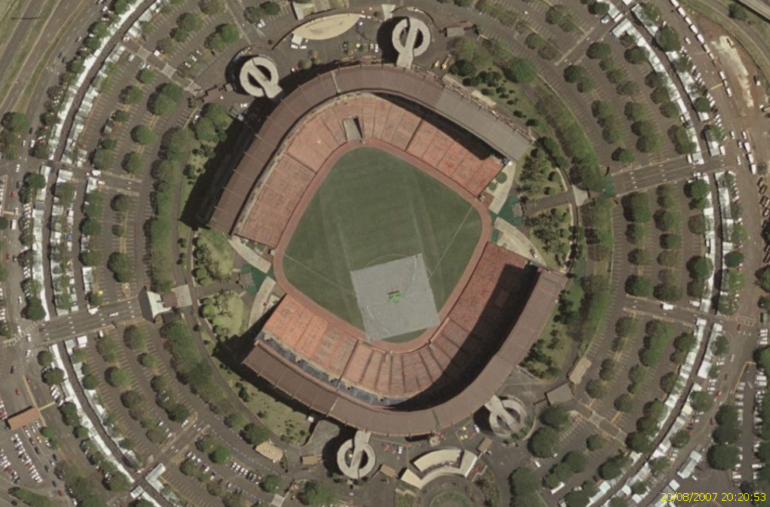 Aerial view of Aloha Stadium in Hawaii configured for baseball and soccer in 2007. (NASA)

Legal issues are surfacing surrounding the cancellation of the U.S. Women’s National Team (USWNT) match against Trinidad & Tobago scheduled for December 6. The match was to be played in Hawaii at Aloha Stadium but was cancelled less than 24 hours before kickoff by the U.S. Soccer Federation (USSF) due to field conditions that the federation said were “not suitable to hold an international soccer match.”

The players explained their decision and expressed their frustration in an open letter published on The Players Tribune:

“The conditions were such that our coach shortened practice to a brief 30-minute training session so we wouldn’t risk injury before the game. There were sharp rocks ingrained all over the field. They were everywhere. The artificial turf was actually pulling up out of the ground, and the turf itself was both low-grade and aging. This was a playing surface that looked like it hadn’t been replaced in years.”

U.S. Soccer president Sunil Gulati offered the players and fans an apology in an interview with The New York Times, calling the last-minute cancellation “absolutely a black eye for this organization.” Gulati said the field had not been previously inspected by USSF according to protocol followed for the other fields on the USWNT’s Victory Tour. An inspection wasn’t done in part, Gulati said, because the USSF was aware the National Football League (NFL) would be holding the Pro Bowl (the league’s all-star game) at the stadium on January 31, 2016.

“We had a series of mistakes involving this game,” he said. “We screwed up. It won’t happen again.”

U.S. Soccer is offering ticket buyers full refunds and the USWNT has since moved on to San Antonio, Texas, where it continues its Victory Tour against Trinidad & Tobago on Thursday, December 10, at the Alamodome, which is also a turf surface.

However, fallout has continued to mount due to the cancellation.

According to the Honolulu Star-Advertiser, the state attorney general is reviewing a letter the USSF sent to the Stadium Authority (the state runs the stadium) in which the federation called the field, “unfit, unsafe and unplayable,” and claimed the stadium failed on its responsibility to provide a first-class field and has defaulted on its agreement.

And on Wednesday, December 9, Hawaii News Now reported that two attorneys had filed a class-action lawsuit against the USSF on behalf of two Oahu ticket buyers. In addition, Hawaii News Now reports the state Department of Consumer Protection has opened up a formal investigation into why the USSF didn’t cancel the match earlier.

Whether the USSF moves forward with litigation against the Stadium Authority or whether the class-action lawsuit moves forward remains to be seen. One thing is clear, however, the cancellation of the match isn’t going to be as simple as just refunding money to ticket buyers.