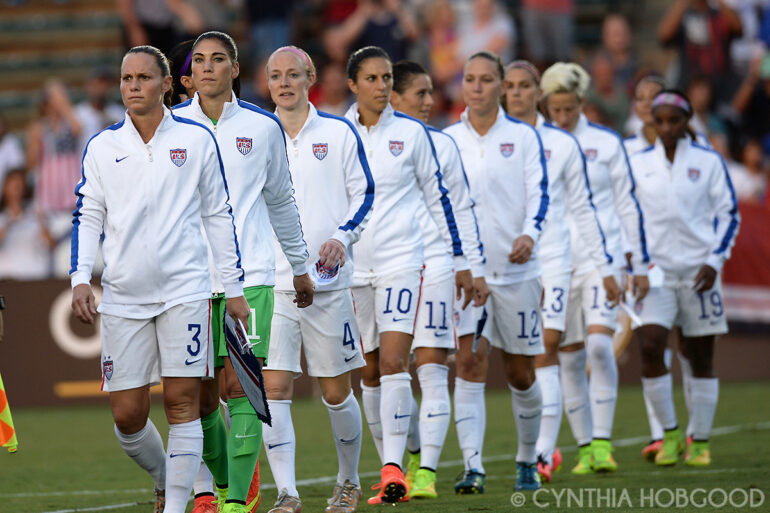 U.S. Soccer has cancelled the USWNT’s Victory Tour match against Trinidad & Tobago scheduled for December 6 at Aloha Stadium in Honolulu, Hawaii, due to field conditions.

According to U.S. Soccer, the stadium’s playing surface “is not suitable to hold an international soccer match.” Ticket buyers will receive full refunds.

“We extend our sincere apologies to those fans who were scheduled to attend the U.S. Women’s National Team match in Hawaii,” said U.S. Soccer spokesman Neil Buethe. “Player safety is our number one priority at all times and after a thorough inspection throughout the day, we determined it was in the best interest for both teams to not play the match. We regret not being able to play in front of our fantastic, loyal fans.”

The move isn’t surprising given forward Alex Morgan’s reaction to the condition of the field after the team’s training session earlier on Saturday and reported by FOX Soccer’s Laura Vecsey later that night. Morgan didn’t mince words about the condition of the training grounds and the stadium field:

“The training grounds that we were given and the playing surface of the stadium were horrible. I think it’s hard because no one’s really going to protect us but ourselves. So we’re put in a very hard position because obviously we want to play in front of these fans and we want to train before the game but injuries happen when you don’t protect yourself and when you’re not protected from those higher up from you,” Morgan said to FOX Sports.

On Twitter, Hope Solo posted a picture of the playing surface on Saturday night:

Our loyal fans: Thanks for standing with us against unsafe field conditions & standing tall for #equal treatment pic.twitter.com/abn560Kitw

Fox Sports’ Jenny Taft reported there were plastic pieces mixed in with the rubber:

After @ussoccer_wnt further examined the turf – I was told that small sharp plastic pieces (pebbles) were mixed in with the rubber. #uswnt — Jenny Taft (@JennyTaft) December 6, 2015

U.S. Soccer cited player safety as its “number one priority” in its press release and yet Julie Foudy tweeted that the field was not inspected by the federation beforehand:

Head-scratcher here. One of many inconvenient questions I have for the federation is why wasn’t a protocol already in place for women’s matches? Foudy reports there will be:

Being told @ussoccer is working w the team & coaches to get a protocol in place similar to men’s. How not already in place is beyond me. — Julie Foudy (@JulieFoudy) December 6, 2015

Why the federation can’t (or won’t) use the protocol already used for the men’s side for inspecting fields is beyond me as well but it speaks to an underlying issue at play here. Why the need for two protocols? Shouldn’t the standard for the national team, men and women, be the best playing surface available? It’s not about the turf, though players have expressed a clear preference for grass surfaces, and commingling that issue with what’s happening here is a smokescreen. No, it’s not that the surface is turf, it’s that the surface is unsafe. This embarrassing episode could have been avoided had the same field-inspecting protocols — the same standard — been applied to the women’s side as it is for the men’s.

And let’s talk about preferences for a minute and drill down to the real issue: the two standards applied to each team by the federation, one of which can only be considered substandard. It’s not hard to figure out which team gets the substandard treatment.

Why isn’t the women’s preference for playing on a grass surface considered in the same light as the men’s? Natural grass was laid down over turf on more than one occasion for the men’s side this year. On one field during the women’s Victory Tour, the players were picking up bolts of the turf field before the match.

Laying grass down over turf certainly does not make for an optimal playing surface in all cases but the fact the federation went to the trouble of at least trying to meet a standard for the men is telling.

Speaking up and speaking out isn’t action taken lightly by the players but it’s come to this. Cancelling the match has ramifications: U.S. Soccer will have to refund the price of all tickets sold and absorb the cost to cover expenses for Trinidad & Tobago; there are costs a ridiculously underfunded Trinidad & Tobago team will still have to bear; there is the impact to consider on its relationship with FOX, which was broadcasting the match; and the social media backlash and fallout from fans are just a few concerns.

But U.S. Soccer talks about “One Nation. One Team.” At least for now, it’s clear that it’s closer to One Nation. Two Teams. Two Standards.