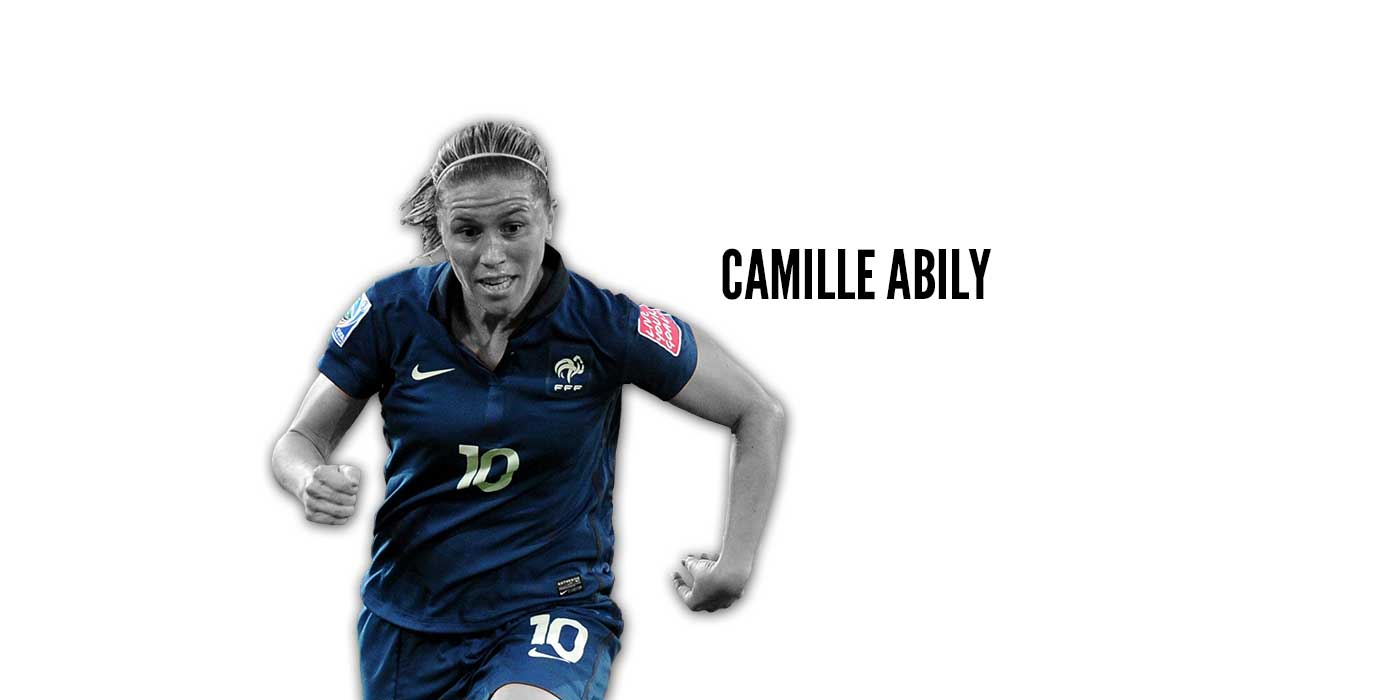 Brandi Ortega·
InternationalInterview
·June 18, 2014·11 min read
Share
[dropcap size=small]I[/dropcap]n another segment of Our Game Magazine‘s Fresh Perspectives Interviews, we had the opportunity to speak with French international Camille Abily while she and the national team are in the United States for a two-game series against the U.S. Women’s National Team. The interview ranged widely, from her beginnings as a player to Zidane to the players and teams she likes to play against. [divider]Camille Abily[/divider] [column size=one_half position=first ]

I had asked how the French international and Olympique Lyonnais midfielder relaxed off the field.

“I watch World Cup,” she continued while pointing to the screen behind us showing the second half of the game between Mexico and Cameroon during the second day of the 2014 FIFA World Cup. “I sleep because for us, it’s the end of the season. We start in August so it’s a long season and so we need some rest.”

End of season being the end of the season of Division 1 Féminine, France’s top women’s league and where Lyon has dominated of late, winning 11 league titles, including the last eight. The season is long, running from September to June, with a break in December and January. After 132 league games, Coupe de France Féminine and Champions League games and with league preseason starting in August, add in national team duty and travel. It’s no wonder sleep is a premium for players.

Abily has been with Lyon since 2010, coming back to France after spending time in the United States in the Women’s Professional Soccer (WPS) league. She won a regular season title with the Los Angeles Sol during the league’s inaugural season in 2009 and took the WPS Championship trophy with FC Gold Pride in 2010.

At 29, Abily has been playing for more than 20 years. It was difficult for her to find a girls’ team to play on so she played with boys. At 14, Abily make the move to a girls’ team.

“I started when I was very young […] when I was six. I played eight years with boys,” she recounted.

“When I was young, I played with a team and I played at school and with my neighbor,” she said.

“I think most players with the national team start to play on a club team with boys. It was 20 years ago so we couldn’t find just [a] girls’ team, it was impossible.”

It was a bit rocky at first, in part owing to the transition from playing and competing with boys her age to playing with and against girls who were older, bigger, and more experienced.

“It was different because I played with boys the same age as me but when I started with girls, I was with older girls […] so it was difficult at the beginning.”

Growing up, which players did you watch?
I like Zidane.

Why?
Because he was the best.

What about the way he played did you like?
Because he was very technical. He had good vision. He knew all the time what to do with the ball. He was just amazing. And he won a lot of trophies, like World Cup, Euro Championship. For French players, everybody watched him.

She adapted and made her first division debut for Stade Briochin and then found time with La Roche-sur-Yon. It was during this time Abily would get her first taste of national team duty, earning her first cap for the senior national team on September 26, 2001, against the Netherlands. She was 16.

Lindsey Horan, recently capped for the United States at the senior level and current U-20 selection, bypassed college and headed straight into the professional ranks with Paris Saint-Germain, also in Division 1 Féminine. So far, Horan is the exception in the United States, but it’s normal for players in Europe to start playing at a younger age for both club and country. It’s important to note the strong college system for women’s soccer in the United States isn’t found overseas.

Is one better? It’s an oft-asked question and one Abily sees both sides of and is careful to note that different doesn’t mean better.

While with La Roche-sur-Yon, Abily joined the Clairefontaine academy, where she further honed her skills and technique. From there it was onto Montpellier, collecting trophies as two-time league titleholders. Her first stint with Lyon loomed and she made the switch in 2006, adding more titles.

Abily stayed with Lyon for three years before coming to America to join WPS and the Los Angeles Sol. Traded to FC Gold Pride, she featured in 17 matches but terminated her contract to return home and to Lyon to concentrate on the 2011 FIFA Women’s World Cup.

Abily was named to the final squad for the tournament and France was drawn into Group A with hosts Germany and Nigeria and Canada. The team made it out of the group stage and advanced to the semifinals, losing to the United States, 3-1, and finishing in fourth place. The fourth-place finish would be duplicated the following year in the 2012 Summer Olympics in London.

Though the team was knocked out of the World Cup, the run into the knockout stages sparked an increased interest back home from fans and media as well as participation in the sport from girls.

Les Bleues, with their technique and flair, it seemed, was the antidote to the toxicity surrounding the men’s side during the 2010 FIFA World Cup.

“We didn’t win, but for us it was good to go to the semifinal. People, they didn’t know women’s soccer before, and after [the] World Cup, everybody spoke about it and they liked it and now they follow us so it’s good.”

Once piqued, interest has to be cultivated and for France, it’s crucial to register results to maintain that media and fan interest.

“In France, if we want media to speak about us we have to be good and perform. So, we know at the next World Cup we have to do something if we want [the] French people to keep following us.”

On to the Next

It’s under a year out from the 2015 Women’s World Cup in Canada. France is in the middle of qualification for the tournament and finds itself atop of the standings for Group 7.

Abily is excited but focused on the first step, which is securing a place at the tournament.

“We have three more games to qualify so we have to be focused on these games, but when we watch the men’s World Cup, we think about our World Cup and we really want to get there and to do well.”

The squad has a new head coach in Philippe Bergeroo, who replaced Bruno Bini in September 2013 after a quarterfinal exit in the 2013 UEFA Women’s Euro tournament.

“I think we are more professional now because our new coach, [Philippe] Bergeroo, he was with boys [teams] before,” Abily said.

“He was a professional before, he played goalkeeper and he won a lot of things when he was a player, when he was a head coach. So, it’s very good for us because he tries to give us how to win. And we are more professional — the French Federation, it’s the same [as the men’s side], the atmosphere. We have everything to perform.”

Bergeroo is a former goalkeeper with national team experience as a player and coach so I wondered whether it was easier for Abily to relate to a coach who shared similar experiences as a player.

Abily’s club team, Lyon, also has a new coach, though it’s one she’s familiar with from her time at Clairfontaine.

Gérard Prêcheur was named head coach after the departure of Patrice Lair.

“I know him because when I was young […] he was my coach when I was in Clairfontaine [for] four years. He was a very great coach and I’m very happy it’s him with us.”

“It’s going to be hard,” she continued, “because we won a lot of things with Lyon. But I’m sure with him we can do very great things.”

Clairefontaine is the national soccer center in France. It’s one of 12 academies across France that specializes in training and developing players. The French Football Federation oversees the academies and bears the cost for selected players. Players train during the week for the Clairefontaine academy and have weekends and holidays off.

Division 1 Féminine contains 12 teams so there’s bound to be some parity issues, especially for teams that don’t have ties to or the backing of a counterpart men’s side. But the gap is slowly closing.

“It’s getting better,” Abily said. “You know, it’s not perfect yet. It’s not like in the U.S. where everybody can beat everybody. I don’t think it’s the same yet in France but we have more great teams, like 4,5,6, great teams. And it’s very interesting and even for the bottom, the teams are better. Before, we won like, 10-, 11-0. Now, it’s closer. So it’s good, it’s getting better.”

And she recognizes how important stronger league competition is in preparing players for national team duty.

“It’s important because, before when we played a team at the bottom and [then] after we have to play an international game, there was so much difference [in play], it was very hard for players,” she explained. “Now, it’s not the same. [Against] Paris Saint-Germain, there is a lot of foreigners so it’s good […] because if we beat them it’s like a Champions League game.”

Speaking of Champions League, Lyon was knocked out this year by Turbine Potsdam in the Round of 16 after winning back-to-back titles. It hasn’t sat well with the players.

“Like this year, we know we had a bad performance because we lost very early. But we went four times in the final, won twice. Next year, we really want to go far and I hope [to the] final.”

As in the French and other European domestic league, Champions League features some weaker teams but, also like those leagues, the gap is closing even though still dominated by teams from France, Germany, and Sweden.

“I think the German teams and the Swedish team are very good,” Abily said. “I think French teams — even if this year we weren’t good — I think France, Sweden and Germany are the best teams in Europe in club teams. I think the level is better and better every year.”

As part of a larger club that features both a men’s and women’s side, Lyon has the resources, facilities, and infrastructure to sign top players, both domestic and foreign. It’s a luxury few women’s clubs enjoy. It works in France and at Lyon but Abily isn’t sure it’s the one-size-fits-all solution to stability and sustainability for every women’s team.

“In France, I think [it’s beneficial]. In Europe, I don’t know because we can see like in Germany there is Potsdam, I don’t think they have a men’s side, but they are very good, so for them they don’t need it because they have a lot of sponsors without a men’s side.”

Favorite team to play against?
“I like when we play an English team like Arsenal or something like that because [of] the name, you know, when it’s Lyon-Arsenal? It was two years ago, I think, there was 20,000 people in the stadium so it was nice [the 2011 UEFA Women’s Champions League semifinal]. So for this, I like to play a club team when there is a men’s [side], too, because it’s good name [recognition]. It’s important when people know it’s Arsenal. So, “Wow, Arsenal’s coming,” so everybody wants to come to the games.”

Have you watched any NWSL games?
“Yes, I don’t watch games a lot because with the time difference it’s very hard, but I follow on twitter and I can see highlights. And I really like to watch it because I know some players. I know I’m going to see nice goals. I want to watch because I want to compare it to with France [… ] I’m very happy there is [a new league] and I hope it’s going to keep going a long time, not like before.”