Kansas City Wins for the First Time at Washington; Pugh Debuts for the Spirit 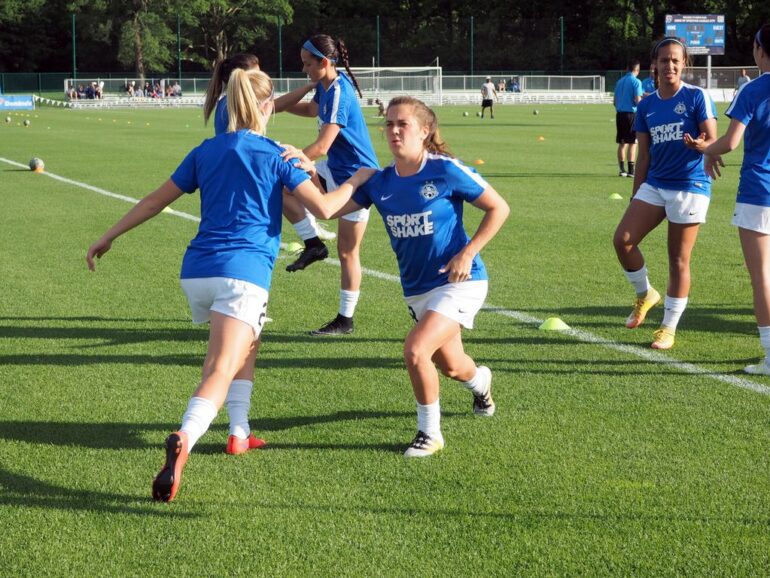 FC Kansas City defeated the Washington Spirit for the first time at the Maryland SoccerPlex in Boyds, Maryland off a goal from Alexa Newfield in the 39th minute. U.S. Women’s National Team player Mallory Pugh made her National Women’s Soccer League (NWSL) debut after leaving UCLA to turn professional.

The Spirit were without Tori Huster in the midfield and started Meggie Dougherty Howard. Alyssa Kleiner got the start at left back in the Spirit’s 4-3-3 formation.

FC Kansas City started an attacking corps of Brittany Ratcliffe, Sydney Leroux, and Shea Groom with Newfield underneath and Becca Moros and Lo’eau LaBonta holding behind her.

Kansas City saw early success on the right with Brittany Taylor started an attack by slipping a ball behind Washington’s back line.

Goalkeeper Steph Labbé almost gifted the Blue an early lead in the 13th minute with a heavy touch that Ratcliffe almost got a clean look at but took a fortunate deflection that allowed the Spirit to clear away.

The story of the evening was finishing for Washington — the Spirit created chances but failed to finish them.

In the 24th minute, Kristie Mewis took a cross into the box from Kleiner well but her shot hit the crossbar. Francisca Ordega got a foot on the ensuing rebound but sent her shot high over the crossbar.

In the 31st minute, Kansas City misplayed a ball that sent Cheyna Williams in on goal but goalkeeper Nicole Barnhart was there to cut down the angle and snuff the shot.

The game’s only goal came in the 39th minute. Left back Christina Gibbons sent in a cross that bounced to Newfield, who took it on the bounce and fire it past Labbé for her first professional goal.

In the 49th minute, Mewis delivered a free kick that forced Barnhart into a diving save to know the ball over the crossbar.

The Spirit were briefly energized by the debut of Pugh, who made her entrance in the 54th minute.

Pugh’s willingness to take on attackers was evident and her incisive runs without the ball show a future that could be bright once Washington’s defensive and midfield lines start to become familiar with her and connect passes.

The teams face each other again next Saturday in Kansas City. With the win, Kansas City improves to 2-2-2 while the Spirit remains at the bottom of the league table at 1-4-1.