Surprised to be Drafted, English Internationals Tinaya Alexander and Lucy Shepherd Settle in with Washington 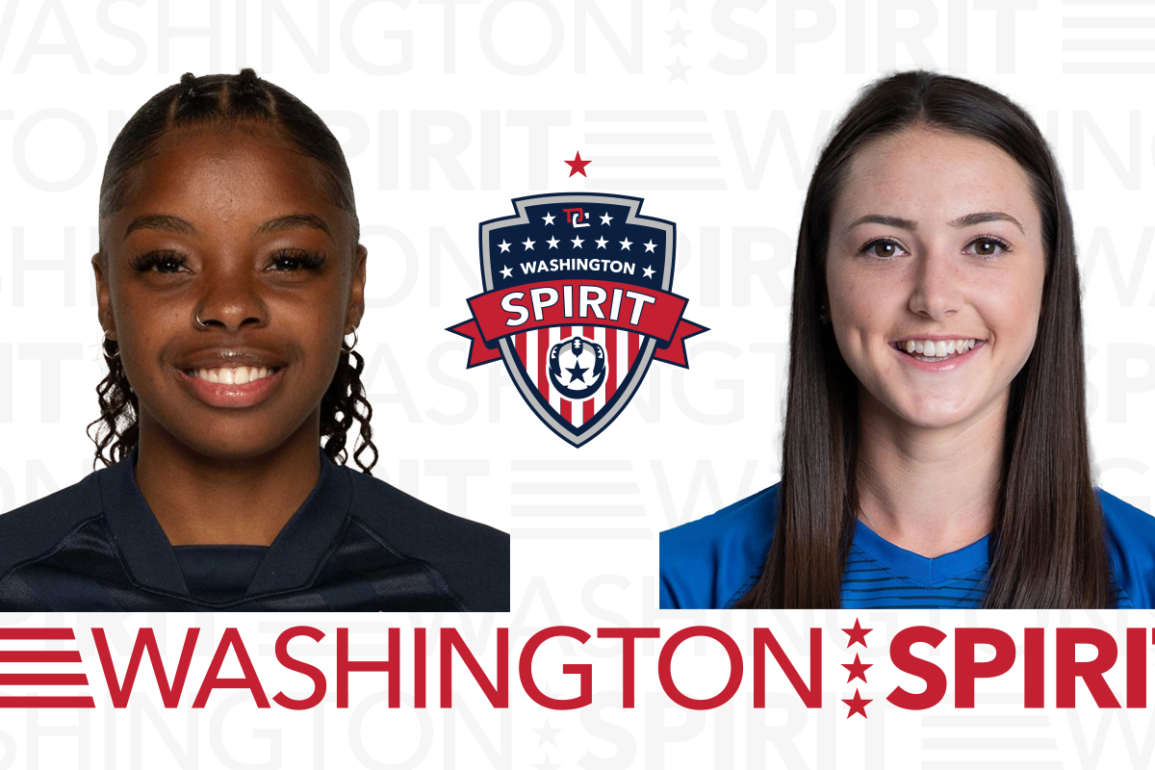 Washington Spirit
I actually said to Sonnett, ‘You’re a lot smaller in person.’Tinaya Alexander
International spots are a prized asset in the National Women’s Soccer League. Every franchise only gets a certain amount per season and the majority are used on big international signings to complement the domestic talent already on show.

For any team to use two international spots in a college draft is rare, but that’s exactly what defending champions Washington Spirit did at the start of the year when they selected young English duo Lucy Shepherd and Tinaya Alexander.

Shepherd attended Hofstra University in New York, alongside a third English draftee, Miri Taylor, who went to Angel City FC, while Alexander graduated from Louisiana State University, both now coming together in the U.S. capital to represent Kris Ward’s Spirit for the season ahead.

The draft has a habit of throwing up surprises and curve balls, with some players knowing where they may be heading, but the two former England youth team internationals both admit they had no idea they were about to be selected by the 2021 champions.

“I had about five or six teams talking to me, but Washington actually wasn’t one of them,” recalled Alexander, who played for Arsenal before moving to the United States. “I was completely shocked, but in a pleasantly surprised kind of way.

While it may have come as a shock, Alexander admits she was delighted to be heading to the nation’s top side at the time of selection.

“I was so happy. I couldn’t have picked a better team to go to. Everyone’s really young and if I want to excel and be the best I can be and play at the highest level then being here is probably the best team for me to go to.”

Shepherd, who played for Aston Villa’s first team before leaving for the U.S. and Hofstra, was equally surprised to not just be selected by the Spirit, but to be selected at all and was planning on heading home to play in England before her name was called out.

“Honestly, I kind of entered the draft not really knowing what was going to happen,” she admitted. “My intentions were to come back to England, but I entered on the off chance something might come about from it, but I had no clue I was going to get drafted by Washington.

“I know a couple of coaches had spoken to my coaches at Hofstra, but to be honest, when I turned on the TV and got drafted, that was like the first I knew of it! We watched with family and friends, but I had no clue what was coming, it was a big surprise because my parents thought I was going back to England with them, but it was a great opportunity I couldn’t turn down.”

Like Alexander, the shock and surprise soon turned to elation as the reality hit home Shepherd was heading to the capital to play with established World Cup winners, some of the nation’s top young players, and a team that had just won its first championship.

“I was over the moon,” Shepherd said. “I think going to the defending champions, that says something. They have great quality, world-renowned players where you get the opportunity to even just learn from these players day in, day out. That’s something that doesn’t come about very often, I’m very lucky to get this opportunity every day.”

Neither asked why Ward and his coaching staff had decided to draft them seemingly out of the blue having spoken personally to neither of them, but Ward did make immediate contact after the draft to talk to both.

“I think it just shows he has great belief in us,” said Shepherd. “I’ve known Tinaya growing up, playing against her in England, and it just shows they want to grow the team and maybe looking to us as internationals is something they wanted to do, but they put faith in a lot of young players.”

“He did reach out to me as soon as they drafted me,” Alexander added, “but my family were making so much noise in the background it was quite a short conversation! He was really nice though and I’d been told by my coach at LSU that he was a really good guy and she’d spoke to him herself and if she could choose one team for me to go to it would have been Washington.

“I wasn’t so sure if I would enjoy the change, I think change is a really difficult thing for me, but so far, it’s been a really easy transition in terms of being happy. I thought I’d be a bit quieter, but I’ve made friends and I’m enjoying it so far.”

Coming and Staying in America

It’s a big step for both. Alexander admits her move to the across the pond to the U.S. and away from family was actually easier for her because her best friend was also moving to LSU, while Shepherd also had close friends from back home, including Taylor, moving to Hofstra at the same time as her.

Despite remaining in the country they now call home, both believe this has been a tougher step as they get a first taste of a true senior environment in which the highest level is demanded by both players and staff on a daily basis.

“The transition to LSU was a culture shock, but going on this journey on my own is a lot more difficult,” said Alexander. “But the team has been so welcoming and I’ve made friends because they’re so open to other people joining.

“It’s more difficult in some ways, but for me it wasn’t as hard coming to America as it has been coming to Washington. Having Lucy here is really nice. We’ve been roommates and we knew a lot of the same people and have shared a lot of the same experiences. We’ve built a bond because we both miss home. She was the closest thing I had to home and I was the closest thing she had to home.”

“There’s a massive step up. The speed of play is so much quicker,” Shepherd added, “but being around these players I feel I step on the pitch every day and I learn something new every day. They have so much experience, they all bring something different to the club, and I think that is what allows this team to have great success.”

The midfielder also has the advantage of having tasted senior football at Aston Villa, while Alexander was a youth team player at Arsenal.

While it was part-time level in the second division, it gave Shepherd an important idea of what it was like playing around senior professionals that she has taken into her first few months in Washington.

“I think that definitely helps, even just playing with older players who are more aware and against more physical players. I think that’s put me one up on everyone else and it’s been really beneficial for me coming into a first-team environment here again.”

For any college graduate, suddenly stepping into an environment that includes double World Cup winners such as Kelley O’Hara and Emily Sonnett, as well as some of the U.S.’s top talents in Ashley Sanchez and Trinity Rodman could be classed as a daunting experience, but both have quickly had to snap out of that mindset and accept they are their equals and are competing for spots within the roster and the starting eleven itself with the Challenge Cup well under way.

“Once the ball gets moving you forget it, it goes out of your head. You’re just there to play ball like everyone else is, but I was definitely more nervous in that sense on day one.”

As a forward, there’s certainly a lot to learn for Alexander who can now count on Sanchez, Rodman, and the 2021 golden boot winner Ashley Hatch as her teammates.

In a league known for its transitional style of play, no team looked as dangerous in attack last season and with Alexander’s attributes as an attacker, she admits she’s been watching her new teammates closely across preseason and in the first couple of games.

“I missed a portion of preseason because I rolled my ankle after the first week,” she said. “I’ve been observing and watching how well they can transition when they’re defending. That’s one big thing I picked up on.

“As soon as they lost it, it’s bang,” said Alexander as slaps her hands together. “Reaction, and that’s one thing I’m trying to implement into my game. They pick a time to attack, especially Sanchez. She’ll stay and stay and then bang, she’ll go, so there’s a lot for me to learn. I want to be a sponge, take in as much as possible from everyone.”

While Shepherd is yet to make her senior Spirit debut, Alexander has featured in three of the team’s Challenge Cup games so far and made her first start against NJ/NY Gotham FC last month, meaning she’s already got a good taste of what lies ahead.

“It’s like a little test run,” she said, smiling. “It’s exciting, you can scout for the regular season. What teams are like, players are like. For me, it’s interesting, because in England we are pretty possession-based, but now I’m learning the other side of it and I think, fingers crossed, I’ll be able to excel.”

Both players enjoyed successful college careers at different ends of the country and both now have an education to fall back on no matter where the rest of their playing career takes them.

Both moved across the pond in search of that balance between sport and education, and both reflect positively on how their own personal experiences have them set them up for their first senior season in the NWSL.

“We had a national team camp here and played against the U.S.,” recalled Alexander. “I liked the setup, how they treated the women, and essentially, I got the gist they treated the women like we treated the men in England. That made my mind up and my mum had always advised me to get my education and obviously that’s a big part of it here, you can kill two birds with one stone.

“That was my whole mindset and if I didn’t enjoy it I could go home. It’s nice to have a plan B and you don’t really realize that until I got injured in college. You’re not just an athlete, there’s more to life than just being an athlete and if one thing goes wrong, you’ve got to be able to do something else.”

“In England, it was very hard to do both when I was there,” Shepherd said. “Coming here to play soccer and get that education alongside it, you don’t come across that very often and it was a great opportunity.

“I definitely got a different view of football over here compared to Villa. Everyone’s so much more athletic and that opened my eyes to a different side of the game and improving on that has allowed me to compete at this level. It’s given me a lot more independence. Being away from family, you grow a lot quicker as a person.”

There is, though, one key thing Shepherd still misses from back home.

“The Americans don’t do tea like the English do. A good cup of tea and a biscuit, you don’t get that here.”