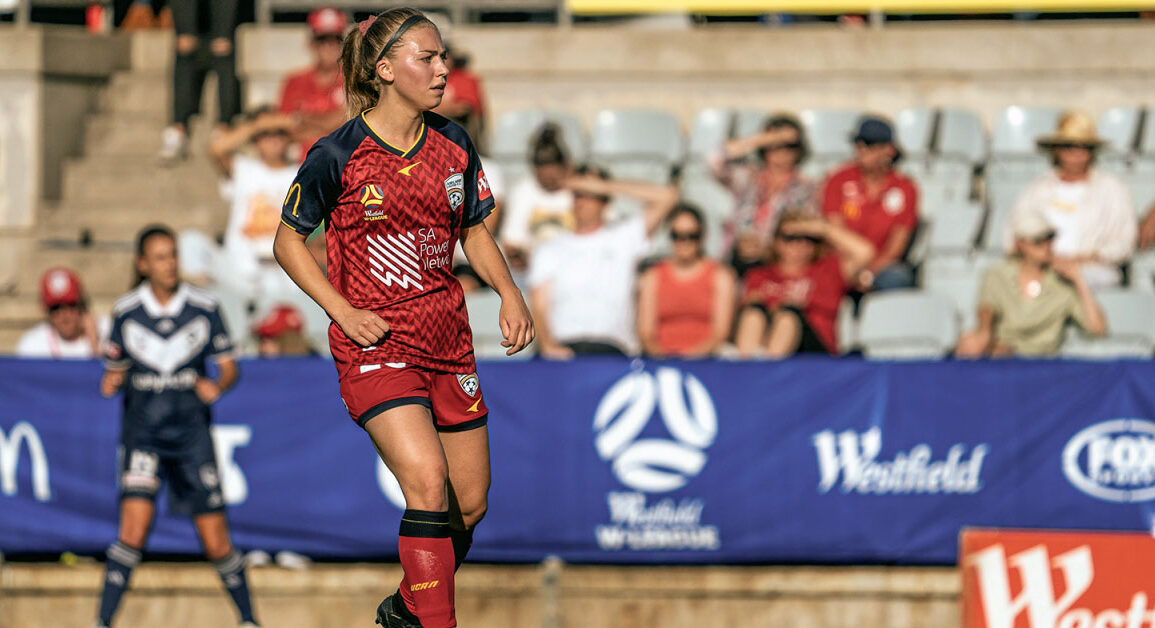 Looking down the list of the top 15 scorers in the A-League this campaign as the season enters its final weekend before the playoffs, 14 of them come from either Australia, New Zealand, or the United States unsurprisingly.

Once again, though, there is an England flag next to the name currently on top with 13 goals. However, it‘s a name likely less familiar with fans around the world than those of former England internationals Dowie and Taylor.

26-year-old Fiona Worts is the name. Formerly of Leicester City and Coventry United, the striker was released by the former and left the latter after a season down the bottom end of the second tier of English women’s football, embarking on a new adventure that has changed the face of her career.

“It is quite strange,” she laughed while on a Zoom call from Adelaide ahead of her team’s last game of the regular season this weekend.

“When you think of the players who have represented here. Jodie Taylor, Natasha Dowie, I suppose players like Kim Little too. They are really big names in English football and to have my name written alongside those is quite surreal.”

She’s done it with some style too. She scored five goals in one game in an 8–2 win against Brisbane Roar less than a month ago, equaling a record set by Hannah Wilkinson only a month and a half earlier and followed that up with a hat trick against Melbourne Victory just last week to seal a spot in the playoffs.

Worts and strike partner Chelsie Dawber are two of only three players to hit double figures this season and have helped Adelaide secure a spot in the playoffs for the first time in the club’s history, with a game to spare, after missing out on the playoffs by just one goal last season.

“Chelsie and I have been scoring a lot, which I guess contributes a lot to our position,” she said. “We just have a really solid team all round. We’ve gelled, it took a little bit of time but we’re definitely getting better and that’s really good for us going into the playoffs with two in-form strikers.

“We deserved to be there last year, that was very sore for a lot of people. This year there was no questioning, we sort of had to get there. To get that close and miss out again would have been painful, so it’s a relief. We’ve got that monkey off our back and hopefully we can prove we are a contender in the league and carry that into next season as well.”

Fresh Start Down Under

It wouldn’t be unfair to say Worts’s scoring streak has come out of the blue. After working her way through the ranks at Leicester City, she scored three goals in just six appearances in the team’s debut season in the FA Women’s Championship before being released.

One goal in 12 for Coventry United followed before the COVID-19 pandemic prematurely ended the campaign and Worts decided to kick-start a new life and career for herself at the other side of the world, but even her first season in Adelaide yielded just two goals.

But after a busy couple of years and settling into new surroundings, Worts credits a change in circumstances and some extra work for her upturn in form.

“This year is the first season I’ve had where I haven’t been in either full-time work or full-time study and I think that’s making quite a big difference,” she admitted. “Being able to have a day off after a game, do a proper recovery program, sleep, go to the beach, and not just turning up for training after a full day’s work, that has definitely made a big difference.”

Worts isn’t completely new to Australia, having studied there and played football for local sides in the past, and it was those previous contacts made that led to her packing up her bags and flying off to Adelaide to start her A-League adventure.

“It was literally someone getting in touch with me who I knew back then saying they were looking for a striker and I’d always planned to go back to Australia at some point, I just didn’t know when or how or why!

“I wasn’t really settled anywhere. Coventry was a great club, but the nature of why I joined was because I’d been released by Leicester and never really settled in. I had the chance to come back out here and was like, ‘Why not?’ I might not get the chance again, so yeah, I went for it.”

“I really love Australia as a country. It feels like home for me, I’m really settled here,” she added. “It would be nice if the professional league was a bit longer and I could enjoy that side of things a bit more. Having a big offseason last year where I could sort of have a bit of time to myself, spend some time in the gym, had a real benefit to my season with United this year I think. There’s pros and cons to the shorter season, I guess.”

Worts makes a pertinent point. While Australia continues to be one of the leading nations in the women’s game on the pitch, with global superstars such as Sam Kerr and a role co-hosting the 2023 World Cup with neighbors New Zealand, it’s domestic league is still very short in length.

The season only began in December and will be done by the end of this month, meaning the next eight months will see players vary in what they do. Many will go back to the United States where they come to Australia for game time during the National Women’s Soccer League offseason, a large reason the league has been able to attract many big names over the years, including the likes of Little and Jess Fishlock.

Local players will likely look for local sides to play for during the break and others may go to Europe, and Worts hopes the league can progress at the same speed as the national team appears to be.

“Australia is in a pretty strong position in terms of women’s football,” she said. “There’s every potential Australia could have one of the strongest leagues in the world. I only played in the Championship in England but it was pretty professional in the way it was set up.

“They really need to keep making those steps towards a longer league, proper home and away fixtures and I think it could start to attract even more international players and become a real powerhouse in women’s football.”

Worts admits she doesn’t yet know what she’ll do when the season ends, and unlike most of her teammates who live local, can’t just fall back on normal day-to-day life and a job. She admits the league is “midway” between everyone being full-time or part-time, and hopes there can be changes to make the league a longer-term option for players like herself.

“Last week we went away for nine out of 11 days, so you kind of have to consider that full-time, but you’re still training in the evenings after work as well. Most players here don’t work, a few work, some study. It’s quite a different culture here, a lot of people live at home, so there’s not much need for people to work alongside the season compared to someone like me who is out here on her own.

“I don’t know what I’m going to do and I think that’s a question for a lot of players. I think it’s definitely something that needs to change for the league long-term because for over half the year you’re not playing at a professional level as you’d like to be. It’s hard to look long-term so I’m taking it more as it comes and I’ll see what opportunities come my way.”

Her 13 goals this season will certainly go a long way to gaining opportunities elsewhere. The team’s last game this weekend against potential regular season champions Sydney FC will offer Worts a chance to secure the golden boot and decide whether it will be Sydney or one of the two Melbourne sides Adelaide will face in the semifinals next week, with Perth also still in the reckoning.

Sadly, the COVID-19 pandemic has meant none of her family have yet been able to come out and visit, but her rise to prominence has seen her gain more attention and nice messages from people back home.

“Not too many blasts from the past!” she laughed. “It’s nice people from back home who I haven’t really told about what I’m doing are messaging, that’s quite nice. A bunch have asked me for shirts, I’ve got about 14 shirts heading over to the U.K.!

“My family have spoken about coming next year, maybe, if I’m still there. But they’ve been waking up at 5 a.m. in the U.K. to watch my games which is nice of them. It’s a shame they can’t come, but it is what it is.”

Her achievements shouldn’t be underestimated either. Her goals have undoubtedly helped Adelaide into the playoffs for the first time and the league is still filled with recognizable names on the world stage, even if an expanded NWSL schedule in recent years has subdued the amount of stars coming to Australia for the winter.

Adelaide will no doubt go in as underdogs for many against teams more established and with more experience in the playoffs, but Worts hopes that can be a benefit for her team and has full belief her side can go all the way.

“I genuinely do,” she stated. “This weekend’s game will be a nice indicator because if we come away with three points, that shows we can compete. We lost twice to Melbourne City but played both those games quite early where we hadn’t really peaked and I think if we played them now it would be different.

“I hope we can show everyone we’re ready for it. I guess in a sense there’s no pressure, maybe on ourselves, but not from anyone else. I do think we can go all the way and that’s definitely what we’re going to try and do.”