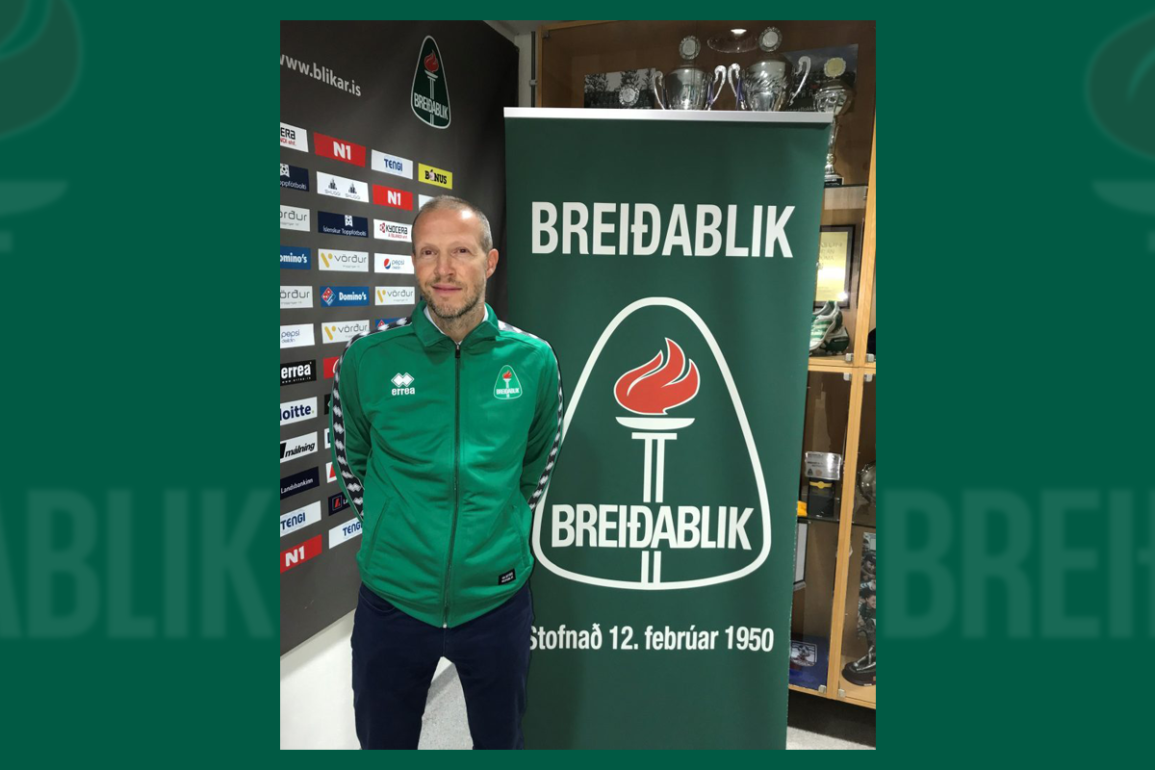 Richard Laverty·
IcelandUWCL
·January 14, 2022·8 min read
Share
“It took a lot of my time working as both a head coach and a specialist in this country, so now is the time to quit and focus elsewhere.”Vilhjálmur Kári Haraldsso

Letting go isn’t easy, not when it’s all you’ve ever known. Going out on top makes it easier to deal with. For Vilhjálmur Kári Haraldsson, though, it hasn’t been an easy process.

After an association that has lasted more than a quarter of a century, Haraldsson finally got his shot at leading the Icelandic women’s team Breiðablik in 2021, guiding the team to UEFA Champions League qualification and an Icelandic cup title, before bowing out ahead of the side’s European campaign at the end of the Icelandic domestic season.

Haraldsson stayed involved to aid the hand-over process, but despite planning a quiet life back in his day job in human resources when we speak before Christmas, he has already got his hand back in, admitting via messages, “It’s hard to stop coaching,” and now works with the club’s development side, Augnablik, who play in the division below, once a week.

“It keeps me updated in women’s soccer and I can focus on the personal development of players. I will analyze games with players, interview them, evaluate them, and help them to reach their goals.

“Many players want to work extra at home but they don’t know what to do. I am going to use my knowledge as a coach and a human-resources manager for many years.”

Haraldsson has several reasons to want to remain involved, even if it’s now in the shadows. Icelandic football experienced a boom after the men stunned England at Euro 2016, while the women will take part in their fourth consecutive European Championships this summer. It’s undoubtedly a country where the sport is on the up.

There’s also no doubt Haraldsson will probably be at the tournament himself given his daughter, Karólína, plays for the national team, and at just 20 years old is shining at Bayern Munich in Germany and also a former player of Breiðablik.

“That was one of the reasons I decided it was time to step away,” he admitted when we spoke toward the end of 2021. “I haven’t had the time to visit her and now I have time. I’m going to watch her play against Wolfsburg and she will be at the Euros next summer, so the family is trying to organize that, I think England will be our summer vacation!

“We watched her score here against Cyprus for the national team. We are very proud of her, she has worked very hard to get to this point and with my experience as a coach I have tried to help her with as much time as I can. We practiced in the evenings; shooting, crossing, everything we could.”

Ironically, it was the sudden hiring of former Breiðablik manager Þorsteinn Halldórsson for the national team job 12 months ago that led to Haraldsson getting his one shot at leading Breiðablik at the top level.

Haraldsson’s association with the Kópavogur-based club goes back much further, however, to 1995 to be exact, six years before the birth of his daughter.

For eight years he coached the youth team on the men’s side of the club, before switching to FH, and then a spell as the assistant head coach of the Iceland Women’s National Team.

It was three years ago that he finally returned to the club that kicked off his coaching career, originally working with the Augnablik development side for two years, before Halldórsson took the national team job.

“My daughter was here at that point and she was a very talented player,” he recalled. “I have tried to do better things for women in Iceland because there has been more focus on the men and the boys, but Breiðablik has as much focus on the women, and I think that’s why we have always been so successful; we have competed and won many championships.”

Eighteen championships to be exact, the last coming in 2020 which propelled Breiðablik into the new group stage of the UEFA Champions League and a face-off home and away with the likes of Real Madrid and Paris Saint-Germain.

With 12 Icelandic Cups and seven League Cups to their name too, Breiðablik are no strangers to success and big games, but the opportunity to welcome some of Europe’s biggest names to their quiet part of the world has had a positive effect on the women’s game in Iceland, as well as the club’s own financial outlook.

Under a new distribution model, every club participating in the new group stage receives £400,000 from UEFA. Perhaps small change to the likes of FC Barcelona, Chelsea, PSG, and so on, but a huge amount to a side still largely semiprofessional and looking to grow year on year all while losing its best players to mainland Europe, such as Karólina.

“That money helps us cover flights and hotels,” he said, before expanding on the challenges the club faces when it comes to trips abroad. “Most of the players have another career. Some players are finishing degrees, some are working 9 p.m. to 5 p.m., then they go and train at 5:30 p.m.

“Some of the younger players are even in college or high school, so it is a bit easier for them to practice more. Breiðablik has helped them out because if you have to go away you cannot work for four or five days, so there’s a lot to work on. We don’t have many players who are fully professional, we have three foreign players who are professional, but also work at the stadium.”

Haraldsson adds that most players have “good connections” with their bosses, which is necessary given they train most evenings for an hour and a half and toward the end of the year had to face away trips to both France and Spain, as well as Ukraine, all in the space of a couple of months.

Last season’s domestic runners-up finished their Champions League campaign bottom of their group without a win or even a goal, but never disgraced themselves, losing just 0–2 at home to PSG in their first game and what was Haraldsson’s final game officially in charge of the team. They also picked up a credible 0–0 draw after a long trip to Ukraine to face Zhytlobud-2 Kharkiv.

“We played three years ago against PSG in the Champions League and lost both games. That was a good experience for the players and there were six in that squad who played against them again this season and could help the other players in terms of what to expect.

“It has become a very big thing. We got a lot of money for a club like ourselves to get into this stage and that will help the club build an even better team for the next years. It’s also a big opportunity for the players to show what they can do to big teams in Europe because some have been getting interest from big teams. It is a big thing here because we are the first Icelandic team to play in the group stage, men or women. There was a lot of interviews to do, a lot of attention, the girls go into town now and people know them, they recognize them.”

For the final game of the group stage against PSG in Paris, the club made a trip available for the families of their players, buying tickets through Breiðablik to go to Paris before Christmas, spend time with their relatives, and enjoy some Christmas shopping in the French capital.

Had the draw gone differently, Haraldsson could have faced his daughter, but it was the French champions who came out of Pot 1 rather than Bayern Munich, with the former manager joking he would have delayed his retirement had it been the case.

“It would have been nice,” he said. “I said in interviews that Bayern Munich was my dream opponent. I think I would have postponed my retirement because that would have been the dream to coach against my daughter and also for her to play against her dad and her club.

“She won two leagues here, she grew up here, it would have been special for her but it was also huge for us to play against PSG and Real Madrid.”

Despite now being a constant presence at the European Championships, Iceland still has a way to go to catch up to some of its Nordic counterparts.

They are yet to reach a World Cup, but the success of clubs such as Breiðablik and some individual players reaching the top level in Europe is having a positive change on things.

“It’s growing,” he admitted. “We are getting many clubs focusing more on women’s football. For many years a lot of clubs have only focused on the men’s team, but in the last few years all the biggest clubs in the men’s game are also doing well in the women’s game.

“The sponsors are saying we want the money to go 50–50 between men and women, a lot of sponsors now don’t want to support clubs if all the money goes just to the men’s teams. The gender equality here in Iceland is very good. The salary isn’t equal, but I think the coaches are getting better, the players are getting better, everything is getting better. Players going abroad is a big deal because really only Sara Björk [Gunnarsdóttir] was doing it, but now we have a lot of players going abroad in big clubs and that’s really important for young girls here to see.”

For Haraldsson, his spell at the top was brief but successful. While Breiðablik couldn’t keep up the pace with eventual runaway champions Valur in the league, they did overcome their rivals in a thrilling 4–3 victory in the cup semifinal, including a stoppage-time winner, before going on to secure the cup itself just five days before their European opener against PSG.

Second, though, secures a path to next season’s Champions League, albeit entering in the first round of qualifying rather than the second due to their position as domestic runners-up.

But for someone who first started working for Breiðablik more than 25 years ago, it was the perfect ending. A cup final victory and a final home game against one of Europe’s top sides is a fitting way for anyone to bow out, let alone for someone with a quarter of a century worth of association with the club.

“I think I’m finishing at the top,” he said. “We did what we had to do and that gives us a ticket to the Champions League next season, which was the most important thing for the club. It was important to make a decision early for the new coach because I only started in January and that was too late, many players were then not available and I wasn’t really able to recruit, so it was win-win for the club when I said I wanted to stop now.

“I have another career working for the biggest transportation company in Iceland and I can follow my daughter’s career more closely now. It took a lot of my time working as both a head coach and a specialist in this country, so now is the time to quit and focus elsewhere.”