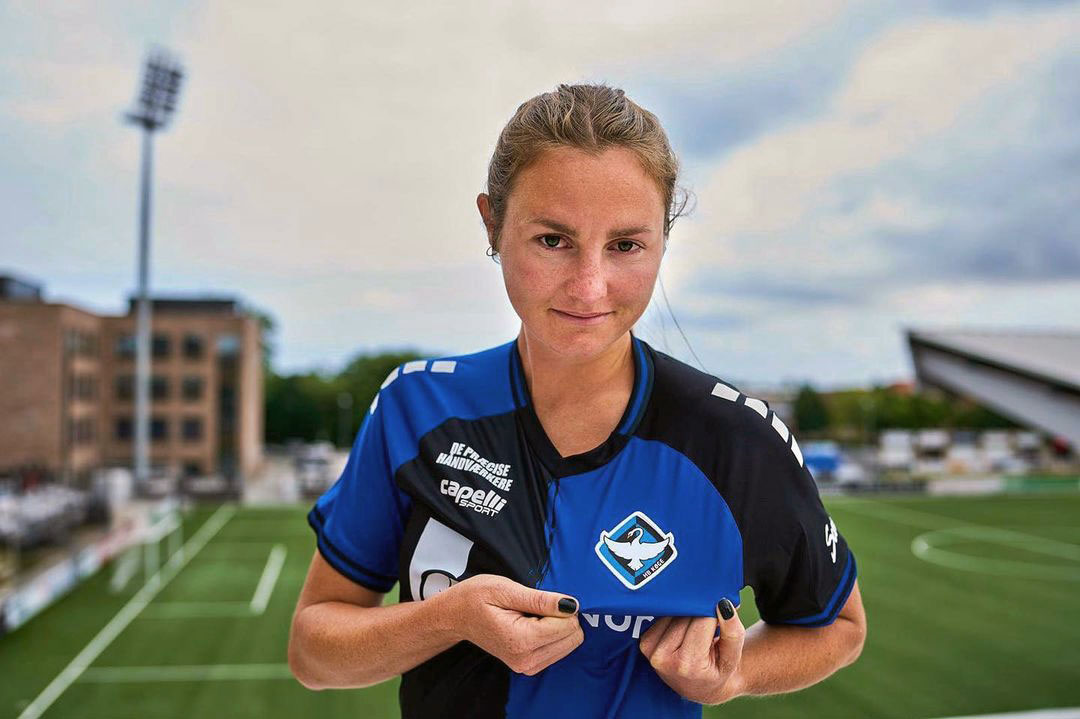 Richard Laverty·
DenmarkElitedivisionenUWCL
·August 31, 2021·9 min read
Share
“They literally pitched a plan to me, they said this was going to be a big-time program.”Kyra Carusa

Not many people will be fully aware of the incredible story behind HB Køge when they walk out for their first UEFA Women’s Champions League match on Wednesday evening against Sparta Prague.

The Danish side became the first team other than Brøndby or Førtuna Hjørring to win the Elitedivisionen since Odense BK back in 2001, but that is only half the story.

The club was created in 2009, eight years after Odense’s title success, and has incredibly been promoted in every season of competition — that is, until it reached the ceiling of the top division earlier this year.

Using a largely homegrown squad, HB Køge entered into a partnership with U.S. sportswear company Capelli Sport at the start of 2020 that has seen a flurry of U.S. college-based players sign with the club, including influential forward Kyra Carusa, who joined after a short spell with French club Le Havre.

After a successful stints at Stanford and Georgetown, Carusa was drafted by Sky Blue FC in the 2019 National Women’s Soccer League College Draft and joined Le Havre later that year, scoring four goals in just three games before being persuaded away by the project put to her by the Danish club while still in the second division.

“I’d just left France at the time and I didn’t really know if I wanted to go back abroad,” said the 25-year-old who now also represents Republic of Ireland at tje international level through her grandparents.

“They literally pitched a plan to me; they said this was going to be a big-time program. They told me, ‘We want to be a Champions League team and we think we can do it in the next year and a half. We have backing that will make sure anything and everything we need is going to be there,’ and I took their word for it. It was a huge opportunity and that’s what really sold me on it. They were people I could trust.”

After just a handful of months in France and little time to settle into the European lifestyle, Carusa was packing her bags again with the promise and a dream of domestic success and Champions League football, little did she know how soon the club would follow through on the promises made.

“They were really passionate about this project,” Carusa recalled. “I was finally like, ‘Okay, I’m doing this Denmark thing.’ When I got here, I could see the program was different from anything I’d experienced before.

“I’d been at Sky Blue and in France, and when I got here it was just different. It was a real culture, you could already see that there was something special happening here and it felt comfortable and it felt good.

“The girls welcomed me with open arms, you just feel as much a part of the team and the program as anyone else. They understood that there’s this person who had just moved to their home country to buy into a project and immediately you’re met with some of the most kindest, most welcoming people, and now incredibly good friends of mine, and I’m so grateful for that.” 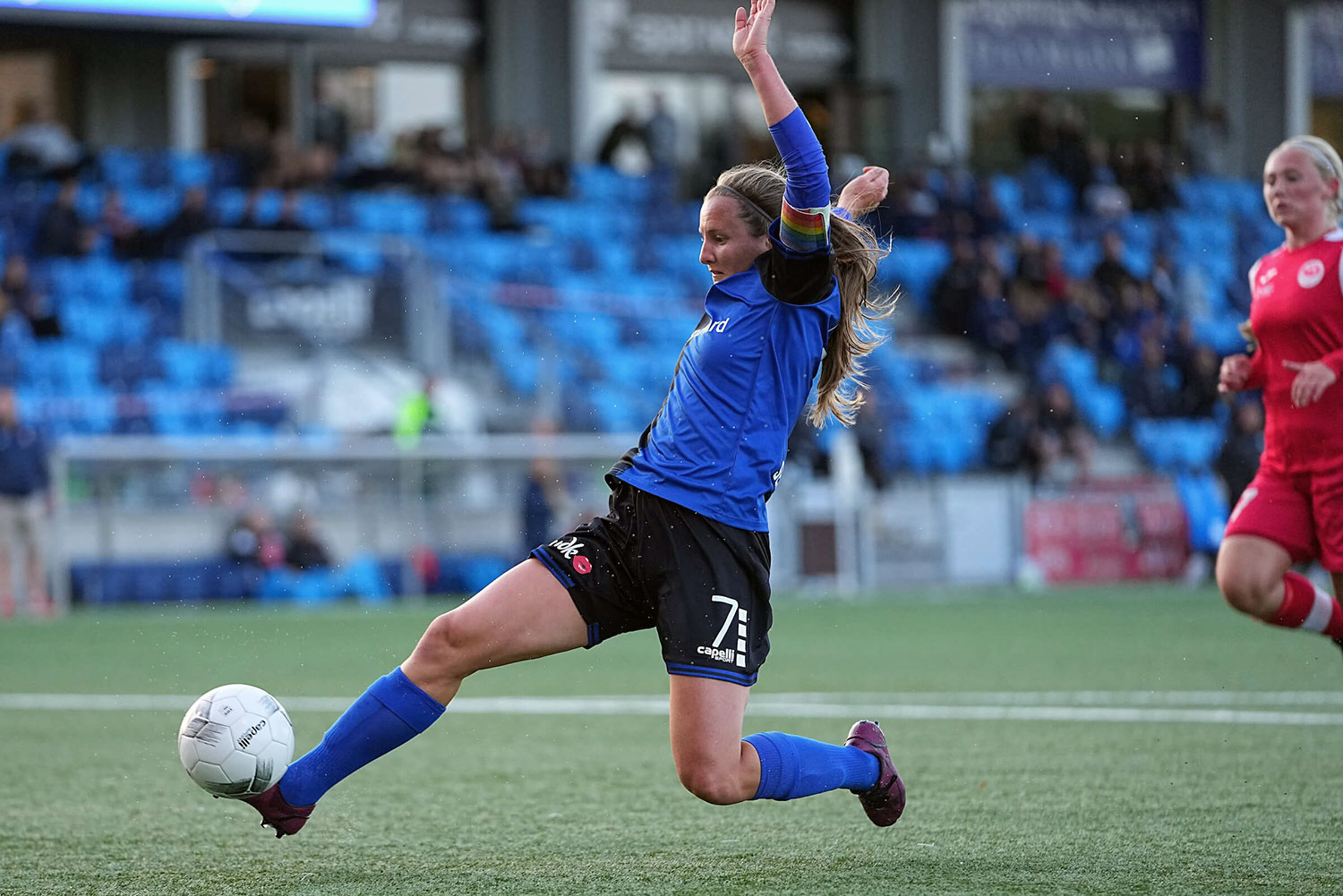 Carusa hasn’t been the only U.S. import since Capelli got involved back in January 2020. Goalkeeper Kaylan Marckese, midfielders Lauren Sajewich and Kelly Fitzgerald, plus striker Maddie Pokorny are there, as well as Mexican international Arianna Romero, and Carusa believes they bring something different to the table to complement the European contingent.

“You can kind of see how there’s American mentality, and there’s an American way of soccer that is so specific to America and Americans when you go abroad.

“There’s a lot of things we can learn from European teams, but there are also things as Americans we bring to the table, this kind of cutthroat mentality and this faster, bigger, stronger kind of craziness. The minute I brought that to the table, everyone embraced it — that was the coolest thing.”

After promotion, an 11th in a row, to the top division of Danish football, Carusa admits the club lost nearly half its team but replaced them well and improved both on and off the pitch in search of securing Champions League football in their first season as an Elitedivisionen side.

The players are full-time and sometimes even train twice a day, and have a new grass training pitch and a new stadium being built around it which Capelli Sport is continuing to support.

New locker rooms are also being built within the facility and Carusa says, ‘Anything you need is there,’ with a full support staff also in place as the club heads into yet another exciting new era this season.

“Truly, it’s really comforting. I got here over a year ago and a lot of that stuff wasn’t there. A lot was just being built and most of it was just like ideas for the future, and now sitting here in 2021 I get to say these things are all really there. There’s always stuff to be done, but for the most part you can spend your time here now doing soccer stuff and no need to have to go elsewhere.”

HB Køge certainly followed through on its promises and by the time the 2020/21 season reached its final stages, the club was the favorite with a couple of games to go, facing their main rivals Førtuna Hjorring and Brøndby in the last two games of the championship stage.

A late goal at Førtuna denied them the chance to win the league with a game to spare, meaning they needed just a draw at home to Brøndby to seal the title on the final day of the season.

Carusa had ended the regular season as the top scorer in the league, adding six more goals in the championship stage ahead of the final-day showdown with Brøndby.

“It’s a funny story,” she recalled. “We could have won the league the week before, but we made a silly mistake, the kind of thing that can break a team, but it was the foundation of this sort of we’re-going-to-win-it-all-it’s-meant-to-be mentality.

“We just looked at each other and we sort of always knew it was probably going to go to the final game. I wanted to silence those who doubted us, that said this could never happen and the funniest thing is I had the mentality of we are going to win this thing, there’s no doubt.”

If there were nerves, none were shown as Carusa and her teammates raced to a 3–0 lead after an hour, with the Irish international scoring the opener, and the league title was sealed with what was eventually a 3–1 win against their rivals.

“We knew we could tie the game and still win the league, but that was never in our minds. We got a penalty in the first five minutes and we missed it, our captain missed it, and even after that happened, no single person on our team blipped.

“She went on and had one of the best games of the season. It just speaks to that kind of electric, contagious craziness that our team had and no other team aside from us had.”

Eighteen months after joining and being told a club that had not yet stepped foot in the top division wanted to win the league and play in the Champions League when that 18 months had passed, HB Køge had fulfilled the promises made to Carusa and other signings when they agreed to join.

But with fierce rivals in the shape of Brøndby and Førtuna Hjorring, there was no guarantee the club would and could keep its promises, and Carusa admits she always believed it would come true.

“There was no doubt in my mind we would get to the Champions League within the next season. It was just never not going to happen and I don’t really know why.

“Maybe we just believed in it so much and maybe it was when I met the girls and staff and I just looked around and I realized just how quickly this energy was reciprocated and how quickly these girls picked up this kind of all-or-nothing mentality. I knew that no other team had won this league in so long, but I just believed we could do it.”

Carusa added: “I think we knew we would always be the underdog, absolutely. I think a lot of people wouldn’t have believed in it, but I just knew if we were going to make it to the Champions League that we could only afford to have players who would take that belief to a crazy level. That’s truly what set us aside from the rest.”

Culminating in a league title and Champions League football to look forward to, a breakthrough in her international career too has ensured an 18 months to remember for Carusa both personally and in terms of her success on the pitch for her club.

However, the striker is aiming high and wants to continue progressing on the pitch, showing no signs of tempering her expectations as HB Køge now look at get past Sparta Prague and reach the Champions League group stage.

“I think that’s the mentality you have to have, especially with a program which has always just gone upwards. It’s rewarding and incredibly humbling to have had the success I have, but I also want to make sure people know that it’s not just a fluke.”

It does, though, beg the question of what next? For a team that enjoyed promotion in every season and then a league title in its first season in the top division there is nowhere else to be promoted to so what is the next aim for one of European football’s most ambitious projects?

While undoubtedly everyone within the club would love Champions League success, even Carusa knows that will be difficult, but is determined to at least defend their domestic league title.

“The Champions League would obviously naturally be the next step. It’s important to keep goals lofty but of course attainable in a sense of, ‘Okay, maybe in the next five years or something.’ But we’ll always explore. I’m excited, it’s not just looking to win the league again, but to dominate it and hold it.

“Have a higher percentage of possession and play a higher level of soccer, the kind of soccer to compete in the Champions League. That’s what I want every day at training. We have to train for when we play a team like Chelsea, that’s the level you need, the mentality you need.”