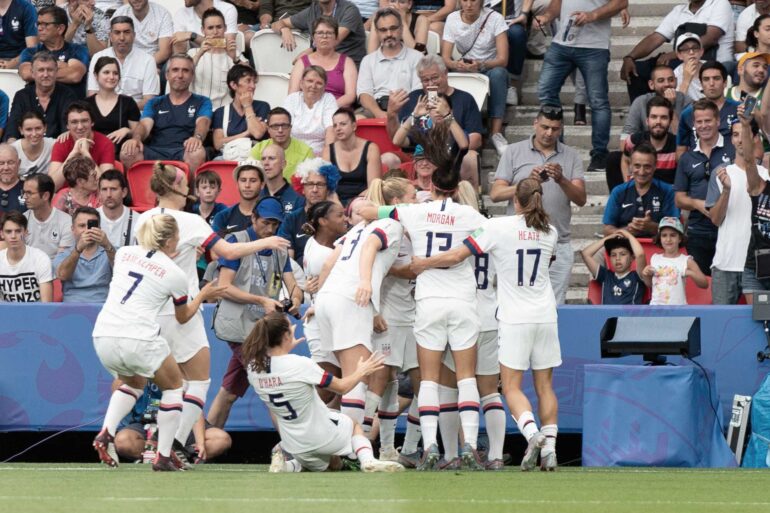 The U.S. Women’s National Team begins its quest to qualify for the Tokyo 2020 Olympics with a roster that includes 18 players from the 2019 World Cup-winning team. Head coach Vlatko Andonovski added two new faces to the 20-player roster in midfielder Andi Sullivan and forward Lynn Williams.

Andonovski said in a conference call with media on Friday that competition for roster spots was competitive but  selecting those players who give the team the best chance to qualify for the Olympic tournament was the deciding factor.

Players left off the roster from the 2019 World Cup team were defender Tierna Davidson, midfielders Morgan Brian and Allie Long, and forwards Mallory Pugh and Alex Morgan. Morgan is pregnant while Davidson is still recovering from an ankle injury suffered during the Chicago Red Star’s 2019 National Women’s Soccer League (NWSL) playoff run and, according to Andonovski, is still not ready to play 90 minutes in a qualifying game.

Pugh, though, is healthy but the 21-year-old’s development at the club and country levels has stalled recently and Andovoski noted the forward’s lack of consistency as the crucial factor in his decision to exclude from this roster.

However, when Pugh regains her form, and Andonovski sounded positive that he expects her to, she’ll be in contention for a roster spot.

“[…] I want to be clear that she is very good, very talented player, she performed well and she has a big future in front of her,” he said, “so I’m pretty sure if she keeps on developing going forward, she will be on this roster.”

Andovoski revealed that he has invited Pugh to train with the squad so the staff can monitor her progress going forward.

Midfielder Andi Sullivan and forward Lynn Williams are the new faces on the roster. Olympic rosters are tight, with only 20 spots, of which three have to be goalkeepers, so players who can fill multiple needs increase their chances of selection.

In particular, Andovoski hinted that Julie Ertz could see time at center back and Sullivan could be a player to slot into Ertz’s defensive midfield role.

Where Williams may lack apparent versatility — she’s an out-and-out speedster and that’s been the core of her game — she gives the team a different way to get in behind back lines.

“[…] where Lynn Williams is a little more an open-field player where she’s able with her speed and explosiveness to get behind back lines,” Andonovski said, “so that way we just add another weapon to the team that ultimately will make us more dangerous and will give us more opportunities.”

Alex Morgan is expecting her first child. Andovoski said he’s monitoring the situation but at this time there’s nothing to talk about.

“Once the time comes,” he said, “we’re going to focus a little bit more on it and see what the timing looks like for Alex and for the team.”

And that aforementioned versatility? It’s called Crystal Dunn and while Andovoski confirmed that her role right now is as a defender, he left open the possibility that Dunn might be used elsewhere.

“She will be, at least for now, she’s a defender. But going forward, I would not be surprised if we see her in any other role.”

Age Ain’t Nothing But a Number

Andonovski peppered his answers with “chance” and “equal opportunity” that should make players, several of whom felt that chances and opportunities under Jill Ellis weren’t always forthcoming, happier.

In particular, Carli Lloyd made no secret of her desire not only for more playing time but also to be a starter during the team’s 2019 run.

Andonovski said that LLoyd came into camp prepared and “was a true example of what a pro competing for a national team spot needs to look like.”

For other players, both on the younger and older sides of the age spectrum, roster selection is (will be?) based on ability.

“When it comes down to any player — not just Carli Lloyd — into constructing this roster, I didn’t want to look at the age, whether they’re old or young,” he said. “It was about whether they can do it or not, whether they’re good or not.”

Andonovoski, former head coach for the Reign FC and FC Kansas City, misses the NWSL College Draft. He said so.

“Talking about craziness in the draft, it was a little bit, I guess, busy, busy draft, and as a former NWSL coach, I do miss the draft.”

The Concacaf Olympic Qualifying Championship runs from January 28 through February 9, with the group stages taking place in Houston and Edinburg, Texas.

The semifinals and final will be held at Dignity Health Park in Carson, California.

The top two teams earn a spot at the 2020 Tokyo Olympics. The USWNT will be trying to become the first team to follow up a World Cup title with an Olympic gold medal.

The United States bombed out of the 2016 Rio Olympics in the quarterfinals and finished in fifth place, the lowest placement ever in a major competition for the team.