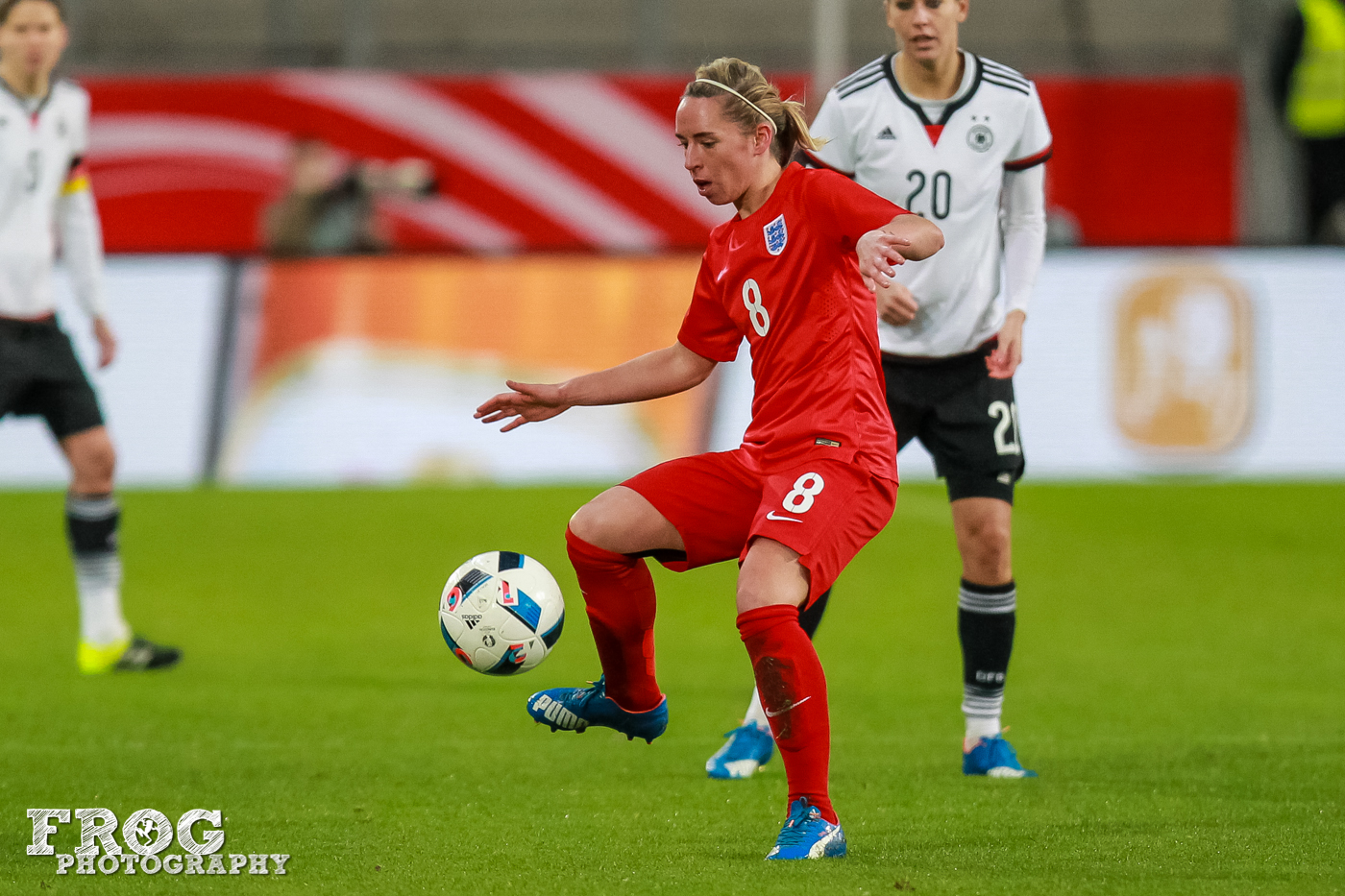 Arsenal and England midfielder Jordan Nobbs says the first person she told after being recalled to the Lionesses squad last week was her dad.

After a 12-month spell out of the international reckoning due to an ACL injury picked up in the FA Women’s Super League at the end of last year, Nobbs has been brought back into the squad by Phil Neville after returning to action for Arsenal at the start of the season.

Nobbs scored against Brighton last weekend and her dad Keith, who travels up and down the country to watch her and is a former footballer himself, was the first person to find out his daughter was back in the squad after missing the summer’s World Cup.

“We’re quite blunt through text so I just said, ‘Going away with England,’ and he was like, ‘Oh, great, love Pappa Nobbs,’ that was basically our moment,” she laughed.

“He’s coming to the game and he’s literally been going up and down the country to every Arsenal game since I’ve been back, so I think he’s excited to see me back playing again.”

Neville has given no guarantee Nobbs will play in either Saturday’s friendly against Brazil or next week’s trip to Portugal as both he and Arsenal manager Joe Montemurro manage the midfielder’s return from a serious injury, but should she feature in Middlesbrough on Saturday, it could be “fate” as the 26-year-old puts it.

“I first got picked for England when I was 12 years old playing for Middlesbrough,” she recalled. “It was kind of fate that it would be my first camp back for England so it’s a nice moment for me and hopefully I can have lots of friends and family there to see me back playing for England.”

Nobbs has missed a lot of camps over the past 12 months, though she has been invited into several of them given her stature and leadership role within the group and traveled to the World Cup in France to do some media work, but could only watch as her teammates took to the field.

After missing a major tournament, the team’s SheBelieves Cup win in March, and the first camp back post-World Cup last month, the midfielder admits it was nice to feel a sense of excitement again after such a lengthy spell without a call-up.

“It was weird because I forgot what the excitement of being called up again is like. I can’t believe it’s been so long but it was exciting, I even asked Beth [Mead], ‘Have you got that email yet?’ because I was wondering if this was the camp I was going to come to — it was a good moment.”

While she enjoyed being a pundit during her time out, she admits she’s keen to park the microphone for the time being as she returns to the football pitch.

“I did some media after the Arsenal game the other day, I had the mic and I was like, ‘No.’ After I was with the BBC I’d be going into service stations and people were like, ‘Oh, you do punditry,’ and I’m like, ‘No, I play football,’ but that’s obviously what I was at that moment, I’ve kind of flung the mic now! But I did really enjoy it and I can’t thank the BBC enough because they did get me through a difficult time actually.”

She added, “In a selfish way it was good for me. Some people thought it was crazy going out to the World Cup when I wasn’t playing but my mind-set was in a much better place allowing me to focus on different job roles. It could have gone drastically wrong but I’m very grateful I played a part in that.”

It’s just not the England dressing room Nobbs plays an important role in. Despite being just 26, she also plays a leading role for her club and Montemurro has often praised the midfielder for her importance in dressing room “morale” but Nobbs is ever the modest one when faced with her manager’s comments.

“No pressure,” she laughed. “I think about Steven Gerrard. He was a player I looked up to a lot, his work rate and things like that, I hope that puts you already at a certain standard. I like to think the girls would listen [to me] but they’re in an incredible place anyway where we all respect each other and we all want to win.”

Nobbs, though, does believe her character and strength has developed in the 12 months she’s been out and she’s been open in the past about the difficulties in coping with such a severe injury and a prognosis that left her with a decision to make about her World Cup fate.

“It’s just difficult with the 10 months out anyway,” she admitted. “You grow as a person when you get older anyway, but being out and being able to notice what people maybe moan about, little things you pick up on a lot more when you’re injured. It’s about being positive and trying to have that outlook of, ‘It could be worse girls’ kind of thing, so it was more just that and trying to be positive around the group.”

On her World Cup decision, Nobbs took the decision early on to give up on the opportunity at getting back fit in time for the summer’s tournament in France in order to properly ensure she was fit and ready for preseason with Arsenal, not risking aggravating an already serious injury by rushing her return.

“It was a hard decision as obviously nobody wants to say they don’t want to go to a World Cup, but I’m 26 and I have heard of some disaster stories as well as good stories, so weighing that up and coming back into preseason with Arsenal, there was no need to rush me as I’d missed a major tournament.

“I didn’t want to be thrown in at the deep end. Arsenal and Joe have been incredible and to get the minutes I have with the squad we have, I’ve been very lucky.”

Nobbs picked up her injury in a match against Everton in Southport last season after she’d started the FA WSL season in possibly the best form of her career.

After twisting her knee in a midfield challenge, Nobbs immediately fell to the ground in pain and didn’t return to the pitch until preseason, but she says she can’t fear going into challenges in the future and if she does then she shouldn’t be back on the pitch.

“I think you can only go back on the pitch when that’s out of your mind,” she said. “I think if you’re hesitating then you shouldn’t be back out there so that hasn’t been a main worry for me. I think the only thing has been doing my loading right, not going straight in at the deep end and playing three games in a week for fatigue elements.

“I know I’m a fit player but I’ve definitely found it hard being out for 10 months and then coming back. My knee is okay, my body reacts differently after training and sessions at the moment but it’s something as a footballer you have to accept.”

Despite no guarantee of game time during this week’s camp, Nobbs said she “wouldn’t be here if I couldn’t play minutes” and is clearly keen to put her mark back on the team as the countdown begins to both Euro 2021 and next summer’s Olympic games.

Nobbs was only on the long list for Team GB selection back in 2012 as a 19-year-old and with just 18 spots up for grabs, she’s determined to be in the best place possible to not miss out on a trip to Tokyo.

“It would be honestly incredible! The last Olympics I was in the long list squad. It’s the biggest tournament you could be a part of and being part of Team GB is my goal but I’m going to take each step as it comes.

“I want to be fit for selection when Phil is picking his squad.”