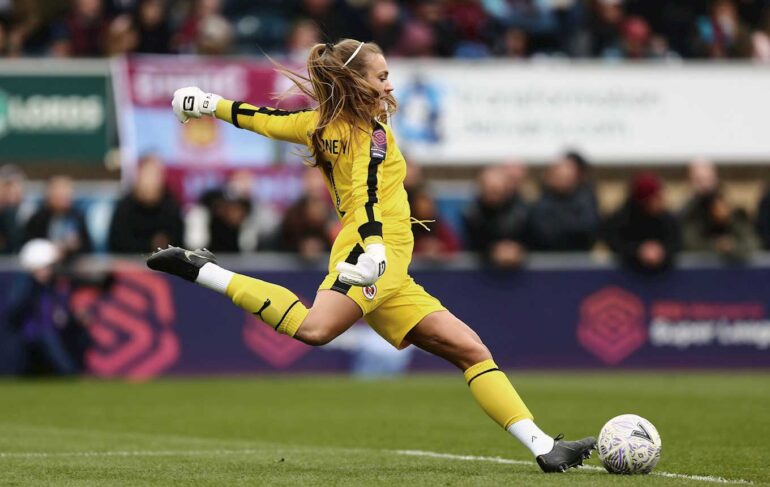 Reading and Republic of Ireland goalkeeper Grace Moloney is keen to hammer home she’s not particularly good at interviews when she enters a room full of women’s football writers, but over the course of the next half an hour shows her humor, quick wit, and cheekiness, which makes her the joker in the pack at Reading.

As part of a lengthy media day at St. George’s Park, Moloney rings teammate Brooke Chaplen to break the news to her she’s picked up an injury during filming (she hasn’t) and her manager Kelly Chambers to tell her she thinks she should be the new club captain (she doesn’t), and Moloney is only too happy to admit she is very much the one to come up with a regular prank.

“I was like, ‘Girls, you need to come and get your new jackets, they’re in, you need to wear it to breakfast and around Bisham,’ and there was only 11 of them for game day and next thing all 20 of the girls have walked in to get these jackets and I’m like, ‘I was just joking.’

“I’m very good at giving it but can’t take it, cannot take it, and they know that so I say, ‘That’s not funny.'”

Moloney and her teammates have just enjoyed a day with the Royal Air Force (RAF), though the way Moloney describes it enjoyed may not be the right word.

Jokes aside, it sounds like the day out was important physical and mental preparation ahead of a season Reading started with a 1–0 win at Liverpool, but Moloney clearly prefers cracking the jokes than a career with the RAF.

“The next thing we had to do was climbing, so we have to jump off some apparatus. I’m going to tell you about the whole day: then we looked at some aeroplane, then we had to get stretchers, and carry stretchers with mannequins on them. It was just horrible and they’d be shouting in your face and you wanted to hit them or swear.”

As funny and engaging as she is, the Ireland international is thoughtful and honest when it comes to the topic of goalkeeping.

With the position regularly such a talking point within not just the women’s game in England but around the world, the performances put on by many top keepers at the World Cup showed the quality is indeed rising, but Moloney once again brings out a laugh with her response when asked if it helps to see such inspiring performances.

“I’m probably one of the worst people to ask because when people ask why did I end up in goal, I say, ‘Because I was fat when I was younger and couldn’t run,’ that’s why I was in goal!

“Obviously KB’s [Karen Bardsley’s] performances were exceptional and other goalkeepers as well. Girls are looking and saying, ‘That’s going into the top corner and she’s saving it, why can’t I?’”

It’s fair to say goalkeeping has changed a lot in recent times, with playing out from the back now a key aspect of many successful teams in the modern game on both the men’s and women’s side of the game.

With Ederson and Alisson the main cases in the Premier League, FA Women’s Super League teams have also made the move toward younger, more technical goalkeepers such as Ellie Roebuck, Sophie Baggaley, and Hannah Hampton, and Moloney also believes things can be learned from different approaches around the world based on her own experiences.

“Craig [McCreeth] focuses more on the female side of the game. We’re not as powerful or as strong so we might need to start deeper so we’re not always getting beaten over our heads, whereas and my Irish coach is like, ‘If you step up, the goal looks smaller anyway, it doesn’t matter if you’re five foot or seven foot.’

“He’s like, it looks smaller and I think different countries teach different sides of goalkeeping and I’m not saying this country is behind or they’re in front, but when you look at the goalkeepers that Germany produce, they’ve probably got a better understanding how goalkeeping should be.”

Moloney isn’t against following the more so-called “modern goalkeepers” and admits she likes to “smash someone” if the opportunity arises, but Reading is another club working toward playing out from the back.

“Our assistant coach Phil is very much that he wants to play out and keep the ball, so me and Lawsy [Rachel Laws] are trying to drill that into our game, so we’ll spend 10–15 minutes at the end of every session just working on our right foot, left foot.”

Moloney is also only too aware of the high standard now across the FA WSL, with the likes of Roebuck, Hampton, Anke Preuss, Manuela Zinsberger, Becky Spencer, and others all shining on the opening weekend, while Moloney herself kept a clean sheet. 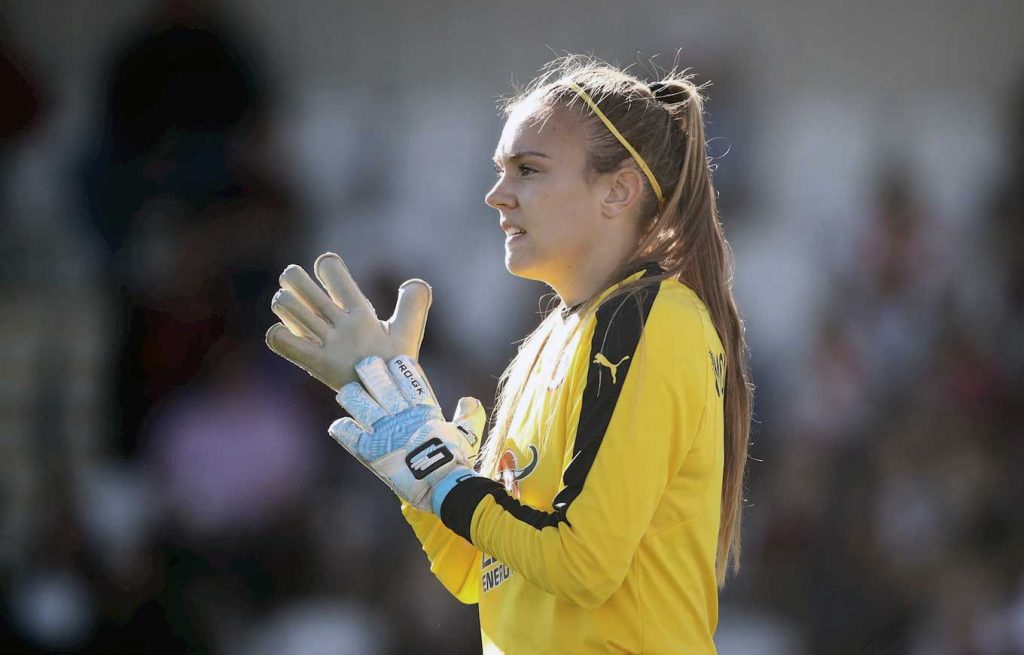 With an array of star goalkeepers from top to bottom in the league now, Moloney references one of the top youngsters who has caught her eye in particular.

“My best friend plays for North Carolina Courage and they were at the tournament with Man City, Lyon, and Atlético the other day, and one of the saves Ellie Roebuck made was… oh my god, it was unbelievable [the one over the bar].

“And one of her saves from Drew Spence last year, that’s probably my favorite save ever in the FA WSL, so she’s my favorite.”

Goalkeeping can often be described as a lonely job, one in which you can be criticized as quickly as you’ll be praised. With no fellow teammate on the pitch to rely on, a goalkeeping mistake is magnetized more than any other position on the pitch.

Moloney, like any goalkeeper around the world, is no stranger to the heightened criticism that comes from being in such a singular position, with all eyes often on the one standing between the two goal posts.

“I just think mentally it’s such a tough position to play and I know my goalkeeper coach is really supportive and we’ll sit down and go through things,” she said.

“Everton at the end of last season I thought about it for week after. I did a shit back pass, passed it straight to them, and one just went under my body and I was like, ‘How has this happened?’ and he was like maybe you needed to stay high or drop or whatever. I think you just need people around you, not necessarily saying, it’s fine but how you can be better, what you can do better, is it you get up earlier in the morning or go in earlier; it’s just your mind-set and your mentality to it is just the most important thing.

“I know at the start of this preseason I had a lot of stuff going on at home and I knew I needed to be up early and I needed to be in the gym because it would take my mind off of it and I’d stay after and just do core after because everything that was going on at home, mentally I wanted to focus on football. I wanted to make sure I kept my position this season and I was giving Lawsy a run for her money and I know she gives me a run for my money. Mentally, I wanted to be in the right mind-set for this season.”

Mentality and mental health is always a big talking point within sport and some of Moloney’s teammates, including Remi Allen and Fara Williams, have spoken openly about their various struggles in recent years.

When asked is there enough support specifically for goalkeepers, Moloney references both of her teammates and how understanding mental health can be difficult in itself.

“Because he was just talking about the football side of it, he was just saying, ‘If I’m not playing I’m going to struggle mentally,’ and she was like, ‘What if it’s about your home life, are you saying you’re not going to support me if I come to you about that?’ So I’m not 100 percent sure really.

“I know over the summer when my niece was diagnosed with cancer, Kelly [Chambers] was really supportive, she’s only one and she was like, ‘If you need someone to talk to or you want a couple of days of or whatever, you can have that.'”