Liverpool’s Amy Rodgers Hopes to Make Most of Opportunity 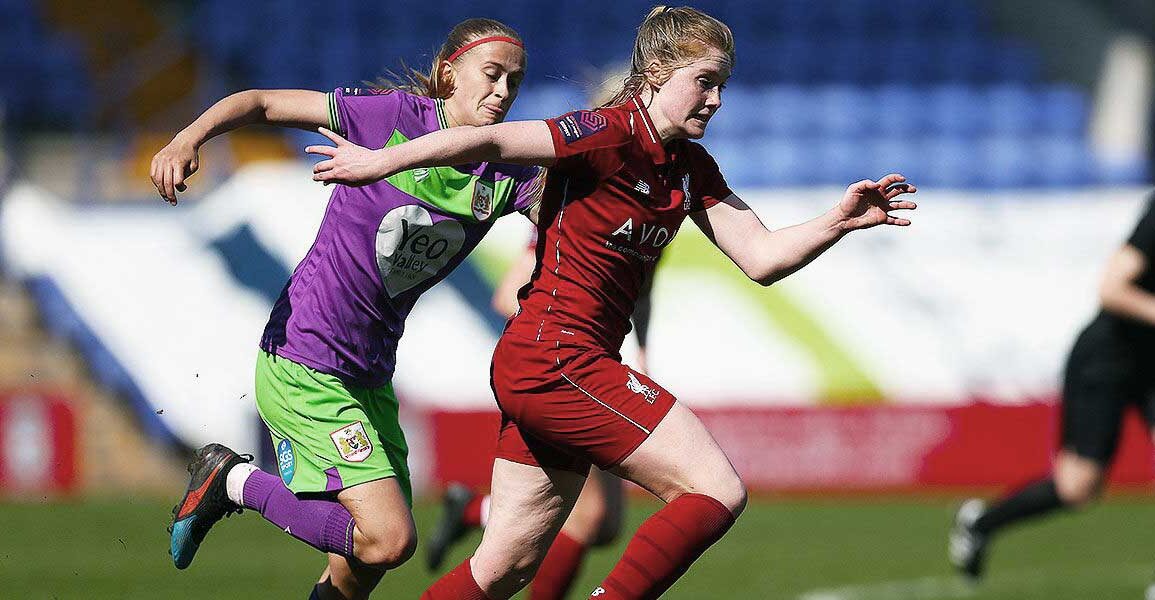 Young midfielder Amy Rodgers isn’t a Liverpool fan, but at only 19 has now earned herself a firm spot in Vicky Jepson’s squad ahead of the new FA Women’s Super League and is an adopted red after a trip to the Champions League in May.

Rodgers, along with teammate Niamh Charles, witnessed the men’s club win their sixth European title in Madrid against Tottenham Hotspur, an experience that told her all she needs to know about what it’s like to be involved with Liverpool Football Club.

“I went to the final in Madrid and just being there was incredible,” recalled Rodgers. “It would be nice even if just a couple of percent of those fans came and watched our games, it would be massive for us, but it’s not as easy as that.

“Hopefully, we’ll keep pushing so that those fans will come. Sometimes the timing is not the best with games on the same days and if the men’s game is on TV, but fingers crossed that it will start to be a bit more like, ‘I want to go and watch the women’s game instead.’

“The experience was unbelievable. Just being in Madrid before the game, the amount of fans there, Liverpool shirts everywhere. And you run into random people through the day who you knew. The atmosphere. I was so lucky to get a ticket. It makes you want to get to games that people want to watch and to want to win things as well.”

One amusing anecdote from their trip to Madrid, though, shines a spotlight on how long it may be until players on the women’s side of the club are household names.

“I wore my Rodgers shirt; me and Niamh Charles were there: ‘Rodgers’ and ‘Charles’ across our backs and Avon across the front. People kept asking, ‘Where did you get that shirt?’ I don’t think we told them [we were players] because we didn’t want to draw attention to ourselves. A lot of them were quite drunk so we just walked away quietly.

“I’m a Celtic fan. My mum is Scottish (from Glasgow) but I’m becoming a Liverpool fan the more I see of the club — it’s a great club. We went to the Barcelona game and after the third and fourth goal, the atmosphere was indescribable. I came away from that game feeling like I’d been a Liverpool fan my whole life, it’s what it made you feel like. Just to know you’re part of that club is incredible.”

Rodgers said it would be a “dream” to have a night like that for the women’s team, who are yet to play at Anfield but manager Vicky Jepson has admitted the club are looking at it off the back of Manchester City, Chelsea, Tottenham, and West Ham all hosting games at their main stadiums in the FA Women’s Super League this season.

“To have people singing ‘You’ll Never Walk Alone’ that loud would be amazing. I’m not the sort of person that would say I’d made it but that [to have a game/night like that] would be up there!

“It’s obviously a lot cheaper to come and watch the women’s game and it’s the same entertainment hopefully.”

While the club, and other clubs as well, may be a long way from selling enough tickets to consistently fill stadiums such as Anfield, Liverpool have always been able to rely on a small group of hardcore fans who follow the women’s team home and away.

Whether it be during the glory days under Matt Beard and the more recent difficult seasons that have seen a lot of upheaval but chances for youngsters like Rodgers, the midfielder appreciates the support they give the players.

“Yeah, my dad always sits next to them,” she laughed. “I don’t think he sings, though they sing all game and you’ll hear them at Manchester City, even when there’s a couple of thousand in. You’ll just hear that group of 10–12 of them and it’s brilliant. It’s so nice when you hear your name being sung in the crowd. It’s great and they’re a great group, so supportive.”

Rodgers made her first-team debut for the club at just 16 years of age during the 2017 Spring Series. She continued to make sporadic appearances but last summer when almost the whole squad changed in front of her own eyes, it actually offered Rodgers the perfect opportunity to nail down a first-team spot under new manager Vicky Jepson.

“I’m really excited,” she admitted. “Hopefully we can build on what we did last year. Obviously, we had a tough start but then back end of the season I thought we progressed really well, so fingers crossed we keep going.

“We were quite a new squad as it was, with players from all over, so I think those bumps helped us become closer and we felt like we’d been together for years when it had only actually been a couple of months.”

Jepson had worked at the club for a number of years at the development level before stepping up to the first-team coaching staff when Neil Redfearn took over as manager at the start of last season.

But Redfearn walked away after just one league game, leaving Jepson to take on the role of interim manager before being offered the job full-time after steadying the ship.

Rodgers, in particular, has worked with Jepson for a number of years so she’s confident she’ll continue to get opportunities under a manager who values young players.

“Vicky coached me at Cheshire when I was about 15, I had her at Liverpool Development, and when she became first-team manager I was really excited because she puts trust in young players.

“She’ll put me on the pitch and tell me to go and play my football and as a young player, that’s what you want to hear. You want to know that your coach believes in you. Vicky is just like that, she is lovely. She understands you as a person, what’s going on at home. I’ve got university as well to deal with and she understands that, she’s just really good with people.”

Rodgers admits she’s “fortunate” to not only be coming into the game at the top level in a period where the sport is thriving, but also where she can juggle her football commitments with her university degree as she goes into the second year of a psychology degree at the University of Liverpool.

“For me, a big thing is my education as well and luckily for me I can do a uni degree alongside my playing, whereas others might have had to work full-time. To be paid and be able to do uni is amazing because I wouldn’t have been able to work, do uni, and play full-time too.”

On her interest in the subject she’s studying, Rodgers added, “I’m more interested in the mental health side than sport — just general psychology. That’s always been the plan. I’d like to be a psychologist when I finish playing. My dissertation may be linked to sport, so maybe I can do mental health in sports.

“We have a psychologist when we are away with England and it’s interesting the role they play. I’m sat there thinking, ‘I want to be a psychologist as well.’ I speak to her at lunch time and ask her about how she has got to where she is and all of the hard work she has put in, which is a lot of years but hopefully I can get there at some point.

Rodgers doesn’t exactly seem daunted by the exciting challenges that could still lay in front of her as a young player coming into the sport, and she believes her knowledge and interest in psychology will help her become even stronger in a team environment.

Like so many, Rodgers credits an older brother with piquing her interest in football, saying she “never wanted to be left out,” whether it was football or even cricket.

The teenager started out at Crewe Alexandra before moving onto Everton and eventually the red side of Merseyside, and two midfielders with close links to the city have proved an influence on her during her short career so far.

Though surprisingly given the club she plays for, neither of them is Liverpool club legend Steven Gerrard.

“[Jordan] Henderson is a big one for me. I love the way he leads and how he has developed since he’s been at Liverpool. He’s obviously a great player but he didn’t play all the time during the season and then he’s proved his attacking game and that’s something I could do as well.”

The other name is someone Rodgers will likely come up against this weekend when Liverpool host Reading, someone who has not just become an opponent but at one time coached Rodgers when she was a youngster at Everton.

“When I first joined Everton, Fara Williams coached me, which was quite funny,” she recalled. “She would join in the session and if she wanted the ball, she’d just push you over and then it would be your fault that you lost the ball.

“There was Fara, Jill Scott, Alex Greenwood, Toni Duggan, most of the England were team were at Everton at some point so it was pretty amazing to think I used to go and watch most of them play and think, ‘I want to be on the pitch like that one day.’

“I’ve tried to emulate Fara, she’s my role model in terms of playing and how she dealt with things off the pitch. I just think she’s a brilliant player, so technical and I aspire to be like her. I actually played against her in December for Reading and it was weird seeing her. I don’t know if she remembers me but I was thinking, ‘This is so weird, you used to coach me!’ I still find it weird, playing with Alex Greenwood when she was at Liverpool and I used to watch her when she was at Everton.”

Rodgers is honest and appreciative about the pathway players like Williams — England’s all-time capped footballer — have opened up for players like herself.

“I think it’s incredible. We have so much credit to give to those players that came before because if it wasn’t for them we wouldn’t be here today. I can only thank them for everything they’ve done for us.”