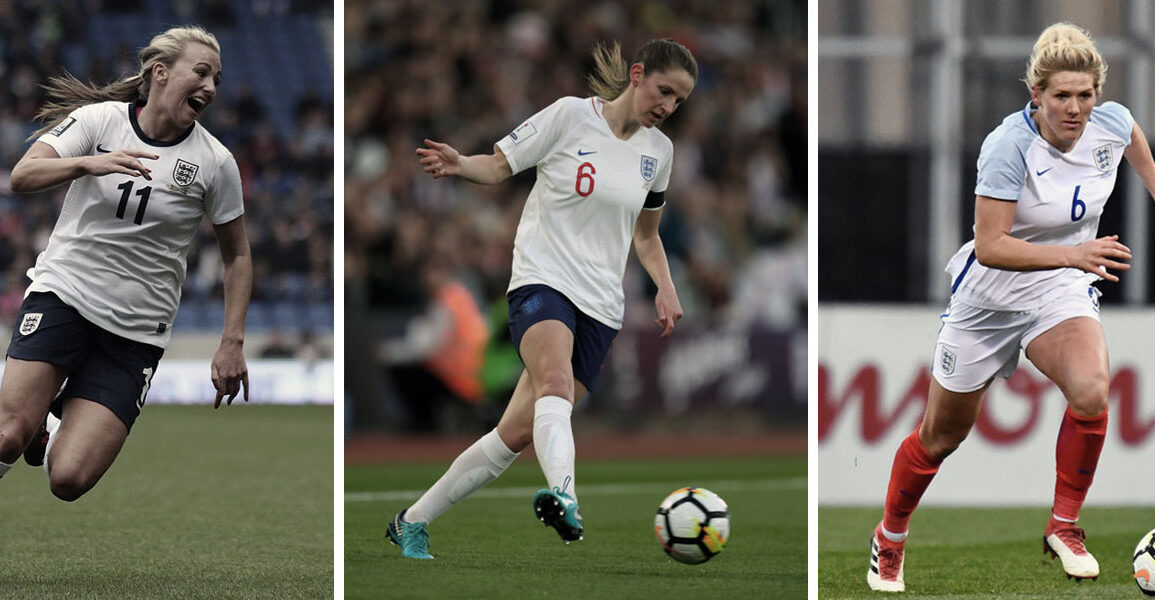 McManus has just left City for local rivals Manchester United after 12 years at the club but offered similarities between the styles, while Toni Duggan and Millie Bright also offered insight into the new style of play Neville has worked on since replacing former head coach Mark Sampson.

Sampson brought a much more direct style to the job, one which Duggan said was “successful” but it appears all three are enjoying the new style of playing out from the back and working the ball forward.

McManus, who will be playing her football under Neville’s former assistant Casey Stoney in the new season, said, “Manchester City play passing football anyway. From the men’s team to the women’s team to the academy, so it’s not something that’s new to me.

“Phil drives it every day here with England and it was good we were playing against a low block versus Argentina because it meant the center halves were running the game. We got a lot of the ball and made a lot of passes.”

McManus herself made more passes in the first half than the entire Argentina team, but both she and Bright admit it’s not a case of passing for the sake of it, despite the amount of square balls between McManus and centerback partner Steph Houghton.

“The more times we went from side to side, the gaps forward starting appearing,” said McManus. “Players like Fran [Kirby] and Jill [Scott] could find the space, turn, and penetrate. We’re going from side to side, backwards, forwards, you name it. We were just trying to keep the ball and trying to break Argentina down, which we finally did.”

Chelsea defender Bright wasn’t involved against Argentina due to a shoulder injury picked up against Scotland, but she too has gained experience of playing in Neville’s system during the tournament so far.

Unlike McManus, Bright also played under Sampson at Euro 2017 and believes the new style of play suits her better as it’s more of what she’s used to at her club.

Neville himself said post-match against Scotland he wouldn’t criticize Houghton for giving the ball away for Scotland’s late goal because she was trying to make the right pass and Bright backed up the assertion that players are encouraged to be brave, even if mistakes happen.

“Something Phil is always saying is always be an option and always be brave to get on with it. You’ll never get punished for losing the ball because he wants you to keep getting on it. That is the only way to get better as a player. It depends on what the opponent gives you. Whether the striker is high press and what angle they give you. It kind of changes in every moment — do they low block, mid block, or do they press?”

Bright does expect Japan to offer a different kind of test to Argentina in that respect, the latter of whom were happy to sit back and make life difficult for England.

“I think they have changed in their games. It depends what state the game is in but I expect they are going to come out and press. We just have to see what they give us. It’s important to mix up our styles. I think again it comes back to the game we are in, the opponent we’re playing, and what they give you. If the space isn’t there then there is no point playing for a long pass.”

McManus added, “Phil shouts ‘rondos, rondos’ on the side. We do little boxes at the start of training. It’s just to keep the ball away from the two in the middle and the more passes you’ve got, the more the opponent hasn’t got the ball so they can’t hurt you. The more passes we play, the more of a threat we are, the more comfortable we are.”

Toni Duggan is also familiar with the Manchester City style after spending three-and-a-half years at the club before leaving for FC Barcelona, the ultimate passing side.

While she may not be a defender, Duggan, who confirmed she’s fit and ready to face Japan on Wednesday after a thigh injury, offered an insight into how she’s adapting having come from playing in the Spanish league.

“They’ve been playing out from the back since they were babies so it’s natural for them and we’re not far behind,” said Duggan of England in comparison to some of her Spanish teammates. “That’s the way Phil wants us to play and obviously he’s been out in Spain so he’s probably robbed a few ideas from Valencia and brought them to us.

“The girls are so confident now in playing out from the back. If you look at the FA WSL clubs, the majority of our team is from Man City, Arsenal, Chelsea, and that’s their style. So why not play that style when we are all together and [its] what we’re best at?

Like Bright, Duggan is also well placed to offer a comparison in styles having played under Mark Sampson at both Euro 2017 and the 2015 World Cup where England brought home a bronze medal despite playing football that wasn’t always easy on the eye.

“Each manager is going to bring in their own philosophy and we were super successful under Mark Sampson because teams didn’t expect us to play the way we played,” she said. “We were so direct and played to people’s strengths. Phil’s come in with his own philosophy and those strengths are going to suit different individuals.

“That’s football, that’s natural. It’s not to say we’re going to be more or less successful under Phil than we were under Mark.”

McManus, though, more than hinted she wouldn’t have enjoyed the previous style of play and wants to have the ball at her feet, as well as admitting she’s had contact with her club manager while out in France.

“If it’s kick-it-long-and-chase-it then that’s not a style for me,” she said. “If the manager asks us to do it then I’ll do it but I prefer to be on the ball, prefer to be playing passes, being in control, and trying to break teams down.”

On speaking to Stoney, McManus added, “She sent me a nice message after the Argentina game. We spoke about my performance, what I’ve done well and what I can continue to work on. There’s a map on social media of all my passes and I said I’d neglected Alex Greenwood a little bit on my left. I’m naturally right-footed so opening up on my left isn’t natural to me but I said it’s something I needed to do. I’m excited to work with Casey, she’s been a massive center half for England. I’m excited to pick her brains a little bit.”

McManus also admitted she wants to “cement” herself as a center back and it was one of the biggest reasons for her move after being used all across the back four at Manchester City.

Understandably, there’s a big influence at McManus and Duggan’s former clubs from Pep Guardiola who has once again guided Manchester City to the Premier League title.

The Spaniard has also left a lasting legacy at Duggan’s current club in Spain and both admit he’s had a big influence on the styles at their current clubs.

“Nick Cushing [Manchester City manager] gets to speak to Pep quite a lot,” said McManus. “Rodolfo [Borrell, first-team coach to Pep] would come over and help Nick with his coaching style. I think at the very start, I think, we all felt we weren’t coached the same way the academies were so at Man City it was a massive thing that we all played the same style.

“It helped the academy lads if they went into the first team, rather than ‘here’s your debut and get on with it.’”

Despite her lengthy association with the blue side of Manchester, McManus is a lifelong United supporter and takes most of her inspiration from two of the club’s best defenders in history.

“There are people like John Stones and Vincent Kompany you look up to but my heroes from day one have always been Rio Ferdinand and Nemanja Vidić, I’ve never seen a partnership like that since. Rio’s composure at playing out from the back and Vidić’s unbelievable ability in the air is always something I’ve driven for.”

Duggan also admitted that Guardiola’s legacy certainly permeates through the Barcelona system all the way to the famed La Masia academy and now a women’s team which is heavily investing in becoming one of the best in Europe after a first Champions League final appearance.

“They’re all under the same umbrella,” said the 27-year-old. “We’re constantly doing rondos, it’s the same language in terms of football. It’s a great club to be at if you want to be a coach after football.

“I used to play at Man City when I was under Mark Sampson and City still like to play that kind of football, but adapting was never a problem. I’d come into England and it would be that bit more direct. We adapt from game to game all the time and it’s going to be same at this World Cup.”

Duggan added that the great Johan Cruyff is talked about even more so than Guardiola but that she “wanted to sit down with him and talk football but I thought I’d never get away from him!” There was, though, one moment where Duggan did come across Guardiola during her time at Manchester City.

“I remember at one stage I was doing some extra running — you might be surprised about that — but I was, in the indoor dome at Man City and he actually came over,” she laughed.

“He was just standing there watching me and I was like ‘Oh, bloody hell.’ I was knackered. I was like, ‘Do I stop? Shake his hand? Carry on and pretend that I can’t see Pep Guardiola?’ So I went to stop and he said no, continue. I was like ‘Oh, my god,’ so he just stood there. I did about two shuttles and then just walked away — thank God for that! But he was a nice man, a gentleman, you see him from a distance and he’s like chewing someone’s ear off about football.

“You think ‘I’d love to ask him one question’ but I’d probably be there for a week! Honest to God, he was so complimentary of the women’s team and the first day that he was there he took his time to speak to us — he was really a gentleman.”