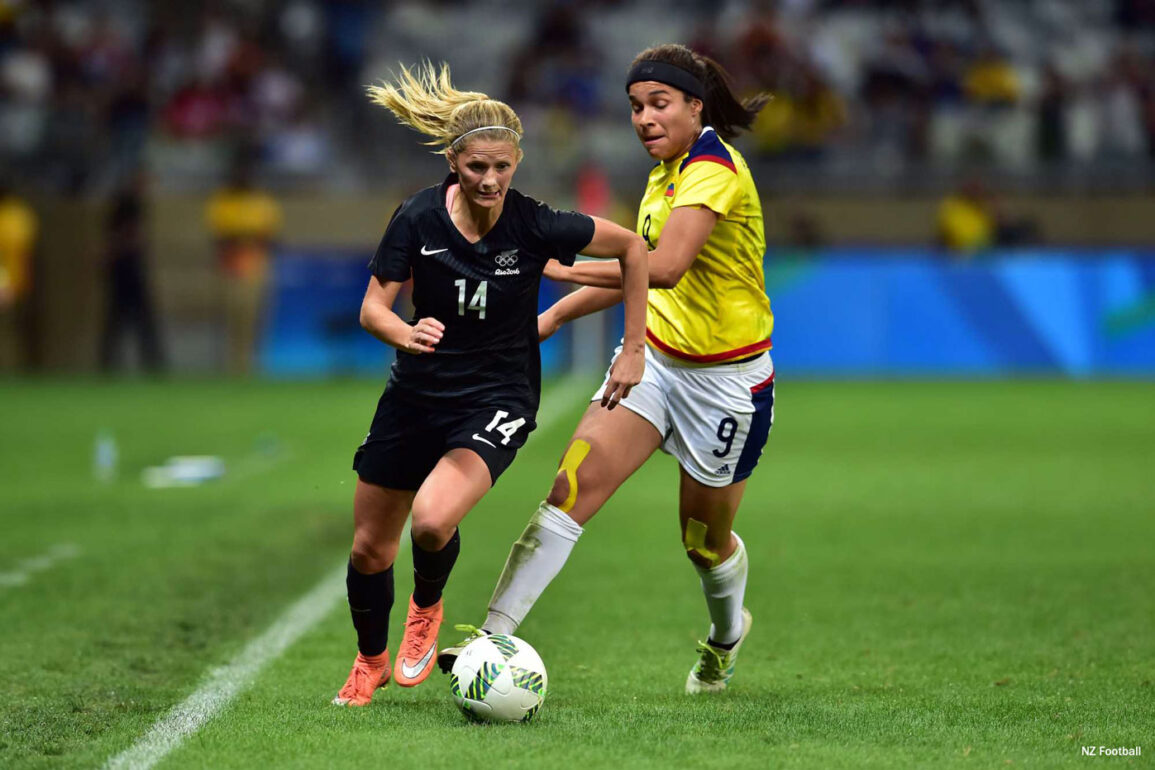 NZ Football
I’ll be interviewing Katie Bowen, one of my best friends on the Football Ferns and also a current player for the Utah Royals FC in the National Women’s Soccer League. Katie has been on the national team for nine years and we’ve had many amazing experiences together all over the world. I’ve decided to interview Katie to give everyone insight into the New Zealand team environment, and to find out her thoughts on the upcoming World Cup in France.

Editor’s note — This interview has been edited for clarity and length.

Erin Nayler: Katie, first of all, we are here in Marbella, Spain, for our World Cup buildup, and we’re playing two matches against Norway. How do you feel coming into the camp with the national team?

Katie Bowen: I’m really excited. I’ve just been in preseason for just under a month with the Utah Royals in America. Having gone from our Australian tour with the national team. So it hasn’t been that long in between tours. I’ve been really excited to meet back up with the girls. It’s always fun to see my fellow Kiwi teammates, and yeah, just really get these two games under way and just apply our game plan and see how it goes.

Nayler: What do you know about Norway, and how important are these games for our World Cup buildup?

Bowen: I think they’re massively important. Each game is an opportunity to grow and see where our weaknesses and strengths lie. Norway’s a very good opponent. We’ve played them a few times over the years and they’ve always been a strong and physical and well-disciplined team. I think they just pose another challenge for us. And so they are differently important and, yeah, good to see where we could possibly be exposed or where we could possibly expose them.

Nayler: And our team has gone through a lot of challenges over the past year. So for you, what do you think is the biggest challenge at this point for our team to overcome to be ready for the World Cup?

Bowen: I think obviously it’s been tough that we lost a lot of time. We’ve had Tom Sermanni come in and he’s been with us for qualifiers, which was late last year. That was his first tour. So we’re talking kind of roughly six-to-seven-months prep to prepare for the World Cup, which is … that’s not always normal.

Usually, you’ll have a coach for the full four-year cycle. So I think that’s probably our biggest challenge and just jelling together and getting Tom’s game plan underway and kind of executing it to the best of our ability in the short amount of time that we have.

Nayler: What would you say our team strengths are at this point?

Bowen: I would say that we’ve got a lot of experience in this team. We’ve got a lot of senior players, a lot of us have been playing with each other for over probably 10 years. I think that’s probably our biggest strength. It’s just about finalizing that game plan and executing it. And I think we still have a little bit to go in doing that, but we’ve got a few games leading up to the World Cup. I think we’re more than capable of doing that. And I think just basically our experience is our biggest strength at this point.

Nayler: Our team has a really good buildup leading into this World Cup and we’re going up against some pretty big teams. Which players are you most excited to go up against, either in the buildup or at the World Cup?

Bowen: That’s a tough question. I think that, like you said, we are playing some very strong teams. I’m very excited to play England. I’ve got a close friend on that team, Jodie Taylor, and I just think they’re a very good team. I’m also half English, so I’ve got some family coming to that game in Brighton. I’m really excited for that. I’ve also got a really close friend who plays for Canada, who we play in one of our group matches in France, Desiree Scott. So that will be kind of weird playing her. But yeah, we’re playing some big teams. I think I’m just excited for all of them, just to see where we sort of stand and how we measure up against these top 10 world-class teams.

Bowen: Tough to say. I know that the Netherlands are a very talented, very fast team. They’ve been struggling lately, didn’t do so well at the Algarve Cup I believe it was. I think they’re still going to be very strong. They have some players playing in top leagues around the world.

Canada will also be strong. They’re always a very well-disciplined team. They’ve been together for a lot of years so I think that they will also be difficult. We also played Netherlands and Canada in the last World Cup, which is kind of bizarre that we got them again. Those will be two big challenges, but I think ones that we’re ready for.

And then Cameroon are going to be fast and very physical. I don’t think we’ll play a team sort of really similar to them in the lead-up to the World Cup, so that could be tough. But I think technically we could have the upper hand on them. I think all three games will be pretty tough, but I think it’s anyone’s for the taking.

Nayler: How do you feel about the World Cup being in France? Are you excited about that?

Bowen: Yeah, I’m super excited. Obviously, you played there and I’ve heard really great things about the places that we’re going to. I think with having the men [French men’s team] just winning the [2018] World Cup, I think it will bring a lot of hype, which is really awesome. Judging from ticket sales they’ve already had, there’s already plenty of games sold out, so I think the atmosphere in France is going to be amazing. I personally haven’t been to France before, so I’m super excited about that. And I have a few family members coming over as well. So yeah, I think it’s a great footballing country and I think they’re really going to get behind the event and make it massive; just sell-out and great atmosphere for us.

Nayler: After these games in Spain you head back to Utah for your first season game? How do you think that will go and who is it against?

Nayler: I’ve heard Utah has one of the best setups for women’s football, possibly the best setup in the world. Can you tell me a little bit about that and how much does it help your personal development?

Bowen: Yeah. I would definitely say that it is the most professional environment I’ve been in, both national team and for a club team. We have an owner, Mr. Dell Loy Hansen, who is massively into building the women’s game and making sure that we’re truly equal to the men.

There is actually a men’s equivalent to our team called RSL, Real Salt Lake, and we are treated exactly the same as them. We have our own locker room, we get breakfast and lunch provided for us, we have our own training field, we have an indoor facility we’re able to use, we have our own weight room.

Those kind of things go a long way because it’s those little things like the weight room, the having the great staff supporting us, that actually help us to perform on the field. The setup itself is just amazing. Anything that I need I just request it to our physio or doctor or team manager, and it gets done. They treat us very well. We’re very fortunate to have a great support team. Yeah, Utah is just an amazing setup and I’m very fortunate.

Nayler: Okay. And we will just finish with a few questions about you. First of all, who is your favorite teammate?

Nayler: And what is your favorite song to listen to before a game?

Bowen: Tough. I love to listen to anything Motown.

Nayler: How do you deal with pressure before a match?

Bowen: I try to take a deep breath and think to myself about the situation that I’m in, and that not many people get to do this and it is amazing that we get to do what we love and play with our best friends and travel the world, and at the end of the day I’ve got a family who loves me, a great setup, and I’m just enjoying life. So whether the result doesn’t go our way or I make a mistake, I try and forget about it quickly and just keep my focus on the end product.

Bowen: Tough. It’s obviously a massive honor when you represent your country. What I love is when we’re back in New Zealand and see the youth, especially the young girls who look up to us. It kind of puts it into perspective how much of an honor it is, and seeing those girls aspiring to be future football [Ferns] and us as role models, that’s the biggest privilege and that’s what I love about playing for New Zealand.

Nayler: Very last question, what is your goal for this World Cup?

Bowen: My goal for this World Cup is, obviously as a team, I would love to get out of the group. That would be amazing, especially as we’ve got a tough group. For me personally, like anyone, I just want to play well. It’s obviously the world stage, all eyes are on you. I want to make a great name for myself and whenever it may be, return to club, return to New Zealand, knowing that I’ve given it everything that I’ve got, that I had a great tournament, and that I was a leader on the field — and hopefully leading the team out of the group.

Bowen and the rest of the New Zealand National Team open up Group E play against the Netherlands on June 11 in Le Havre.