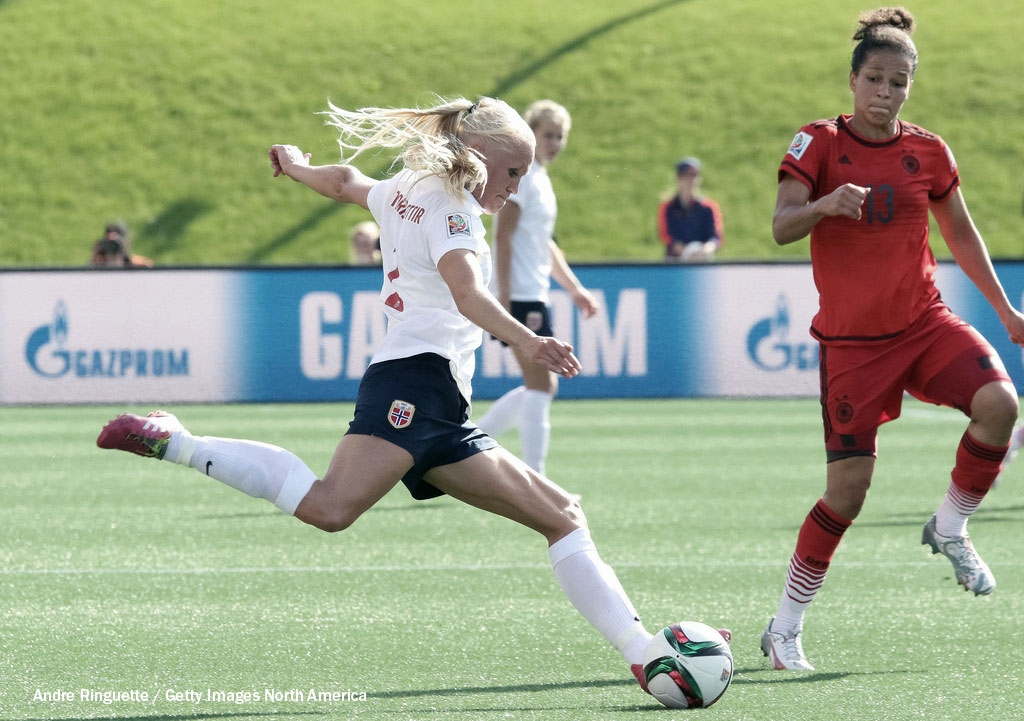 Norway's Maria Thorisdottir takes on Germany's Celia Sasic. (Andre Ringuette / Getty Images North America)
[dropcap]O[/dropcap]ff the field she’s our sweet, dog-loving prankster, but once she steps on the pitch she’s nothing but pure Viking. Maria played for every single one of Norway’s youth national teams before being named to the senior team in 2015 and is determined to prove that Norway is still a force to be reckoned with despite their disappointing 2017 Euro campaign. She’s just come back from a head injury that sidelined her for five months, so she is itching to get to France for her second World Cup and play the game she loves.

Ali Riley: What are you most excited about for the World Cup?

Maria Thorisdóttir: I’m excited to play against France; they are a really good team and it’s going to be a huge crowd. I love the challenge of playing a top team, and hopefully we can give them a good game. But I’m also just looking forward to seeing how far this team can go together as a group. We’ve had two hard years since the Euros and people stopped believing in us. So if we can stick together and have a successful World Cup it would be amazing. Support for women’s football is getting better in Norway, but if we can win some games it will grow even more.

Riley: In 2017 it was announced that the Norwegian women’s and men’s national teams would receive equal compensation, thanks to a contribution from the men’s team. How important was this step for the women’s game?

Thorisdóttir: I think it was a really good statement that the men made by helping us. The big increase in money especially supports our players who are studying, so they still have an income. We were the first federation to do this, so hopefully it encourages more to do the same.

Riley: How has this team changed since 2015, and what will you need to do to get out of your group?

Thorisdóttir: It’s a really big difference actually, since we’ve changed a lot of players. We’re a young group, but with a lot of international and professional experience. It’s a good mix of young and senior players. Those of us who played in 2015 were disappointed when we got knocked out in the Round of 16, but we have learned from that experience.

Riley: Tell me about playing both for club and country with Maren Mjelde.

Thorisdóttir: It means a lot to have Maren. I actually didn’t know Maren well at all before I came to Chelsea [in 2017] and now we’ve become really good friends. To be playing beside her in the Norwegian defense is really nice, since she’s a really good player and to experience both Chelsea and Norway with her is special. Hopefully, we can play a good World Cup together after the tough season we’ve both had with serious long-term injuries. Having Maren with me when I was trying to come back from my concussion helped me a lot. I can’t wait to play in France with her.

Riley: How do you say sane during a long tour like the World Cup?

Thorisdóttir: I like being social and doing funny things like pulling pranks, just to keep things light. We usually have a room at our hotel set aside for the team to have somewhere to hang out and do non-football things together. This team is a really good group of girls who like socializing — it’s not like everyone is just alone in their rooms.

Riley: What was the qualifying experience like for Norway?

Thorisdóttir: The qualifiers are a long process. We even have the Euro qualifiers coming up for 2021 already but we have to focus all of our energy on the World Cup and potentially the Olympics first. But when we won our group and qualified for France, when the ref blew the final whistle against the Netherlands, that was the best feeling I’ve ever felt. So many people had doubted us but we stuck together and believed in ourselves, so winning that game… I get emotional just thinking about it. This is my proudest achievement so far.

Riley: Who should we keep an eye out on the Norwegian team, besides our Chelsea players of course?

Thorisdóttir: Ingrid Engen is a really good midfielder who is going to Wolfsburg next season. She’s been very good for both us and LSK in Norway. Guro Reiten is another good young midfielder coming through. And, of course, Caroline Hansen, she’s one of a kind.

Riley: What can people expect to see when they watch Norway play?

Thorisdóttir: We are a hardworking team that works together. We are physical and will fight until the end… hopefully, that means scoring a lot of goals, too!

Thorisdóttir and the rest of the Norway’s National team open up Group A play against Nigeria on June 8 in Reims.