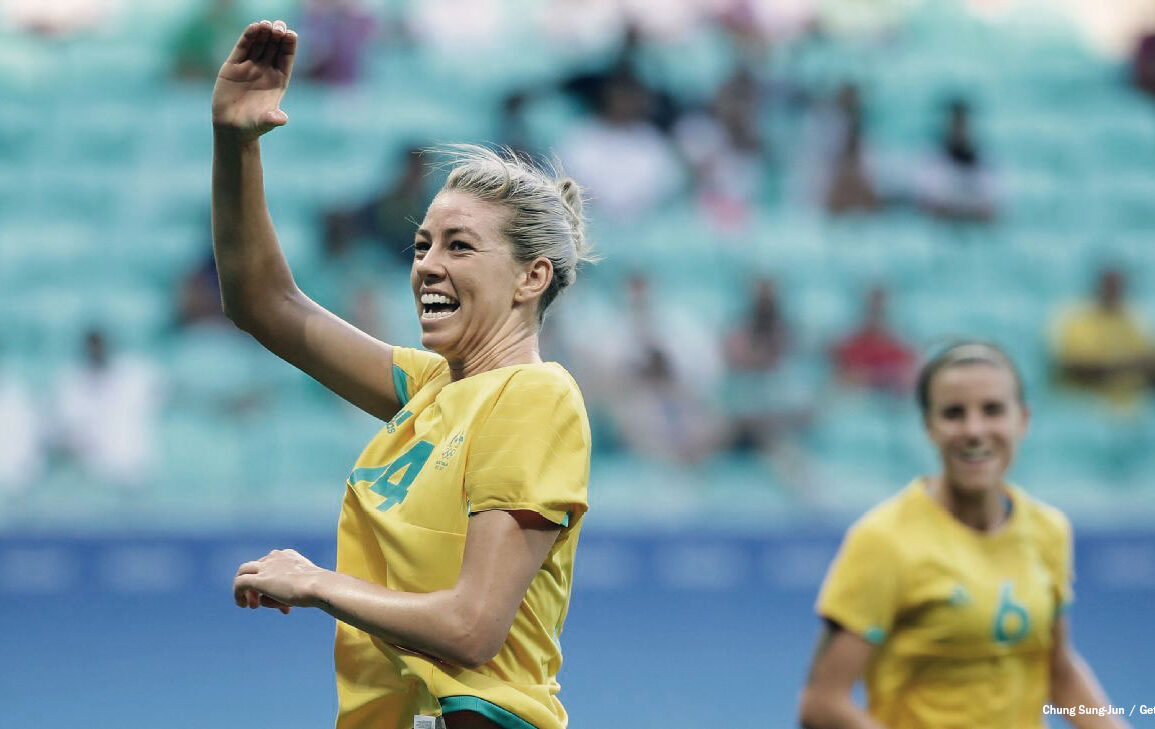 Chung Sung-Jun, FIFA / FIFA via Getty Images
[dropcap]A[/dropcap]t 24 years of age, Alanna Kennedy already has 78 caps for the Australian Women’s National Team, debuting for the Matildas at age 17. Along the way, she’s become a mainstay for Australia, appearing in five matches for the squad that made it to the quarterfinals at the 2015 World Cup.

During the Rio 2016 Olympic games, Kennedy played every minute for the side that bowed out in the quarterfinals after going down on penalties to Brazil. Club-wise, the defender plies her trade with the Orlando Pride in the National Women’s Soccer League (NWSL).

Orlando Pride teammate Haley Kopmeyer interviewed Kennedy ahead of the 2019 World Cup to get her thoughts on the tournament and Australia’s chances in it.

Haley Kopmeyer: Okay, we’ve got Alanna Kennedy. Alanna, who is in your group for the World Cup?

Alanna Kennedy: So, we have Italy, Brazil, and Jamaica in our group.

Kopmeyer: What do you guys have to do to make it out of group stage?

Kennedy: To be honest, I don’t think of it like that. For us, well, obviously, we need to win, so that’s what we’re thinking, that we want to win all three games. I haven’t really broke it down to if we do this, if we do that… I think our focus is on if we win our games, we don’t need to worry about those kinds of things.

Kopmeyer: Makes sense. Which players or teams are you most excited to play against?

Kennedy: If we’re just talking the group stage, I think I’m actually really excited to play in both the game against Italy and Jamaica because I’ve never played against them before, but I’m more familiar with Brazil. I think that’s going to be our biggest challenge. If I’m talking the players specifically, I think especially for me, I’m looking forward to playing against Marta.

Kennedy: Yeah, she’s a teammate and, obviously, she’s Marta. It’s cool for me to be able to come up against her, I guess, as a defensive player, so she’s probably the main person I’d say.

Kopmeyer: Which players for the Matildas should people we keep an eye on to make an impact? Kennedy: So, obviously, got Sam, she’s the person that people are probably most familiar with, and I think she’s going to have a huge impact for us. I think Caitlin Ford has been in good form, as well, but she’s someone that people know about as well. But, someone who I actually think is a really quiet achiever, and she’s been in the team for many years is Tameka Yallop. She’s just the workhorse. Like I said, an under [the radar] achiever, but she does so much for us. Her work ethic, and then on the ball, she’s very craft, and she’s gritty. I think she’ll be really important for us.

I’m hoping that, with the form that Em’s [van Egmond] in as well, I’d really like to see her have a good World Cup, because she’s been playing so well, and I think she has such a huge role in our team. Again, she’s someone who people know, but I think she’s ready to have one of those out-of-this-world tournaments. I think she’s due for it. I’m excited for her because she’s been in really good form. I’m hoping to see her have a good World Cup.

Kopmeyer: That’ll lead me into my next question. How is it prepping with her? Obviously, you’re in a unique spot where you’re prepping for a World Cup, but you’re in a team setting. Is it like having another Aussie in the Orlando environment? Is it good to have someone else that knows what you’re going through?

Kennedy: I think it’s definitely helpful. I think we’re in the best situation right now, the perfect balance of just having one player around and Em and I are best mates. So, I think for us, we really enjoy pushing each other, and we’re also able to keep each other accountable, because we’ve got the same goal, but we’re also enjoying our time as Pride players at the moment.

So we know that we’re in an environment where we’re getting better for the World Cup, but our focus has been on our team here. I think we’ve been able to do that because we’re in an environment where I’m not worried that I’m not getting better. I know that I’m doing the work, so, ultimately, the work that I’m doing here for the Pride is going to make me better for the World Cup.

Kopmeyer: With so many Aussies in the NWSL, obviously, there’s a familiarity, right? You know you guys are all kind of in unique situations here. For those who are not with NWSL teams, how is their prep different from yours? Or is it a little more individualized?

Kennedy: It is, but we’ve also tried to get them in a location where they’re all together and doing stuff as a larger group, just to make it less isolated, and also they’re under the eye of our coach so that just sort of keeps them monitored easier.

But it’s definitely much different preparation. If anything, it’s probably similar to the way we prepared last World Cup, none of us played overseas, we all stayed in Australia and we were preparing for five months together. Whereas now, it’s obviously different. We have more players overseas. So, yeah, it’s hard to find that balance, but I think those girls who are back home have sacrificed a lot to be in the best position one, to make the team, and two, to be in as good physical condition as they can when the World Cup comes around.

Kennedy and the rest of Australia’s Women’s National Team opens up Group C play against Italy on June 9 in Valenciennes.