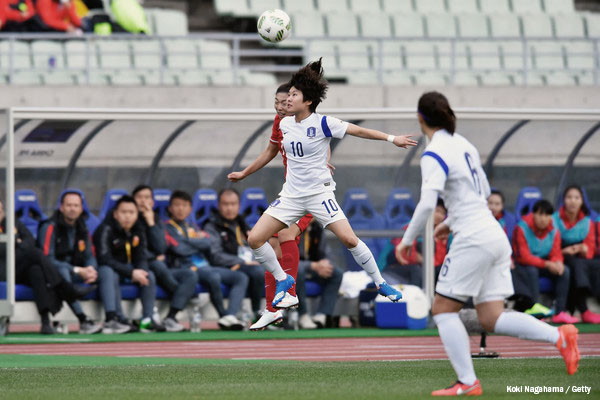 Koki Nagahama / Getty Images
[dropcap]W[/dropcap]e train together every day, sit next to each other on the bus for away trips, and joke about the English language (Ji loves to call people “Cheeky Bastard”), but this is actually the first time we’ve sat down to discuss football and what it means to be going to the World Cup in a little more than a month’s time. Well, I’m sitting down — Ji is getting a massage from one of the Chelsea physiotherapists while I interview her. We have a bit of an audience in the treatment room, which is making Ji nervous. Her English is impressive and her career even more so, but she is extremely humble and gets really shy when put on the spot. I end up whispering my questions to her.

Ali Riley: This is your second World Cup. What are you most excited about?

Ji So-yun: Yes, we have a really hard group, but I believe in this team. We also had a hard group in 2015 but we believed in each other and made it to the Round of 16. Now that we’ve experienced that, I think we are even more ready this time. We are older now and have more players playing for top professional teams.

Riley: What’s it like to play against club teammates on the international stage?

Ji So-yun: It’s interesting to play teammates because you know each other really well. But it’s fun to see each other on the pitch. I’m always really friendly, but Maren and Maria… they are not! [The entire room cracks up at this, including Maria].

Riley: How did it feel to qualify for the World Cup?

Ji So-yun: We played against North Korea in North Korea. We had to win or draw in order to qualify, so it was a lot of pressure. I had never been to North Korea, because we were not allowed to. So to go there and then not be allowed to go out, only the hotel and the training ground — it was so intense. There were 50,000 people at the game. I was so nervous! But we tied them and we made it! I was so happy, but we didn’t celebrate on the field out of respect to them.

Riley: Is there much support for women’s football in South Korea?

Ji So-yun: Not at the moment. I think the biggest problem is that too few girls are playing football at every level. If we do well at the World Cup, we can get the attention needed to encourage and inspire young players, to allow them to dream. When I was young I couldn’t watch female players, so I watched men’s football. Now I hope that little girls can look up to us and have female role models.

Riley: What is your proudest achievement so far?

Ji So-yun: When I was young my dream was to play for a big club like Chelsea. I am so proud to be here now. My next goal is to win Champions League… and every trophy in England!

Ji So-yun and the rest of the South Korean National Team open up Group A play against France on June 7 in Paris.