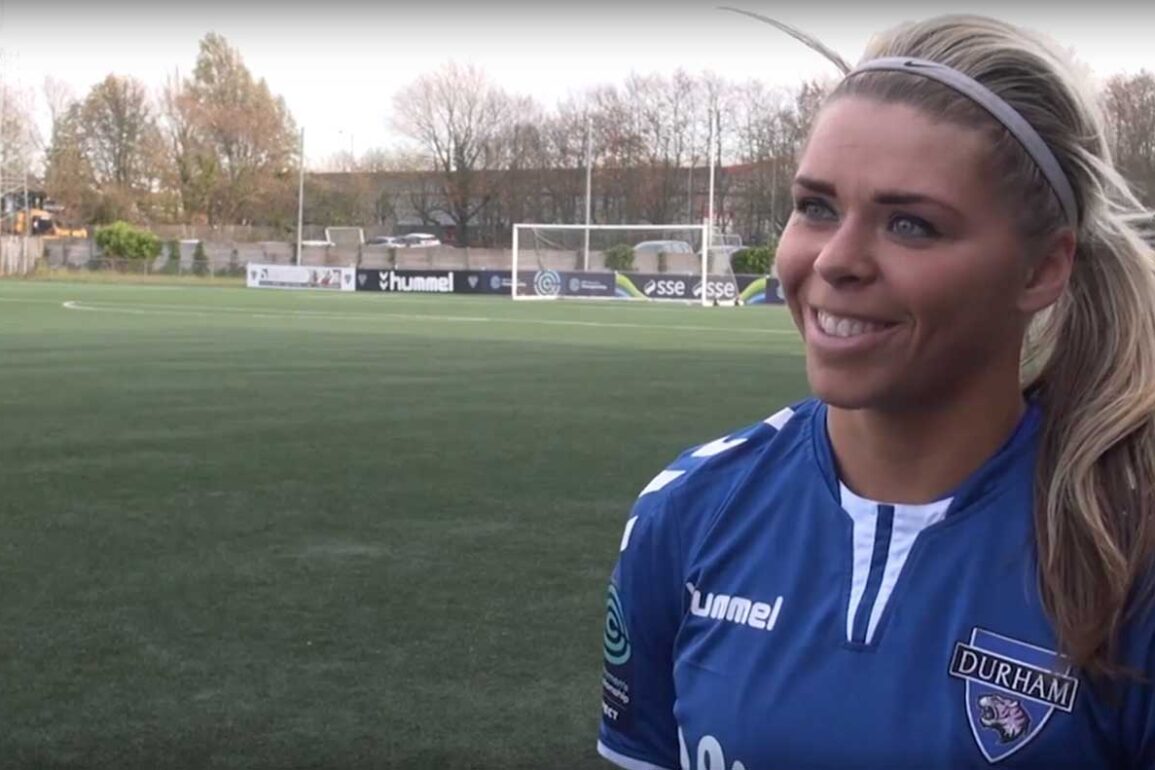 It doesn’t take long for the harsh realities of part-time football to bubble to the surface as Durham’s Becky Salicki runs me quickly through her day three days out from their landmark SSE Women’s FA Cup quarterfinal against Chelsea.

Salicki, who runs a pub owned by her parents, has been at work since 7 am and came straight to the club’s training ground to take part in a media evening set up by the club before a training session at 7 pm.

The defender will get home at around 10:30 pm tonight, meaning a day which has lasted around 16 hours is still not yet quite at an end.

“That’s the dedication the players have here,” she said. “If you look at players like Emily Roberts, for example, she lives in Leeds and probably won’t be home until past midnight.”

Not that it bothers them, of course, the players who have now become veterans of the club, such as Salicki, are more than at peace with their situation.

“We all whinge but we wouldn’t change it, we laugh about it. We had an unfortunate event going to Crystal Palace where one of our minibuses broke down but it happens, we had to laugh about it.”

Salicki says her days are practically 24/7 as she lives on the site of where she works and can often be found juggling her work with football, sometimes literally.

“I can be running around on the pitch at training on the phone to the electricians because the power’s gone off at the pub!”

But Salicki says there will be no rushing off down to her place of work should Durham pull off the unthinkable when they face Emma Hayes’ holders at New Ferens Park on Sunday as they’ll probably be too “knackered” from their David versus Goliath encounter.

The second-tier side that is only six years old continue to defy the odds and yet the wider women’s football community still reacts in surprise to their achievements.

Independent from any men’s team, Durham has consistently challenged the top teams in the second division and remains the only side to take points off Manchester United in the FA Women’s Championship this season… and they did it twice.

Tally that with an impressive 2-0 win over FA Women’s Super League side Bristol City in the last round of the cup and it perhaps should be no surprise they have reached the last eight of the FA Cup for a second year in succession.

While beating Chelsea seems an almost impossible task, Salicki herself admits her teammates are realistic about their prospects but are determined to enjoy it.

“We’re all thriving off it, we’re not scared, we’re ready for it,” she said.

“We were drawn out first so we were buzzing to be at home but then Chelsea got pulled out and it was like, ‘Oh God, anyone but Chelsea,’ but it’s a great opportunity to essentially say we’ve played against some of the best players in the world.”

Why the extra trepidation toward facing the holders? Salicki has her well-thought-out reasons.

“I think just the players they have. You can’t ignore Arsenal or Man City obviously but they have Ji, Fran Kirby, Ramona Bachmann, et cetera.

“You watch clips and Kirby scored a goal last night which was one touch for about 10 passes and you’re sat there thinking, ‘Bloody hell, that’s what we’re going up against,’ but it’s something we’re excited to come up against at the same time.”

Perhaps they have every right to be a little worried about the proposition facing them. Aside from a full squad of international stars, Chelsea also has access to top facilities and train every single day.

Durham, meanwhile, get access to the local Marriott Hotel gym for recovery on a Monday before two evening sessions on the pitch on Tuesdays and Thursdays, a stark reality often seen in the score lines when full-time and part-time teams meet in the middle.

So what is the secret to Durham’s continued ability to not just mix it with bigger teams with more resources, but beat them?

“As cheesy as it might sound, everyone loves this club and loves playing with each other and for each other, essentially that’s where it comes from,” said the defender, who isn’t alien to the fact Durham’s geographical position compared to their rivals has helped in terms of keeping the squad relatively intact.

“Consistency in the squad is massive for us and it’s a credit to the club to get them to stay here because they want to play here. We’re not doing it for the money, this is a hobby; for others it’s their job. We come here to relax, to have a social life but be very serious about what we’re doing.”

It might not be about the money but the financial injection earned so far from their FA Cup run will undoubtedly help the club continue to fund everything for their players, particularly travel.

The club has received £5,000 in prize money and would gain another £4,000 should they beat Chelsea on Sunday, and with their most local away trip a two-hour journey to Sheffield United, every little bit helps when it comes to funding coaches and hotels.

“We’ve been away a lot already this season and a lot of that money goes on away trips,” Salicki admitted. “We’re very lucky, we don’t pay a penny, we get fully looked after, but money isn’t a big thing for us and it’s potentially why we do so well because we’re not driven by it. We do this because we love it and we want to be here for this club.

“We’re not affiliated to any men’s team but we’ve got a togetherness I don’t think many other teams have. Traveling away so much does give us a lot of time together and it breeds a lot of unity. We’re a family, not just the players but everyone behind the scenes.”

If Durham are to topple Chelsea on Sunday it will take all the effort of their impressive 3-1 win over Manchester United and more against a side who are current holders of not just the cup, but the FA Women’s Super League and face a Champions League quarterfinal next midweek after their trip north.

Salicki admits as a unit the defense has been “fantastic” this season but it’s a mark of the side’s attitude that despite their success, there’s an air of frustration about some of their other results.

“We defend from front to back. We’ll literally put our bodies on the line to stop the ball going in the net. In the Man United game, everyone was ready and when it comes to big games we’re a big-game team.

“It’s the games against the not-Manchester Uniteds where we’ve had bad results and you kind of look at it and say, ‘God, why don’t we perform against these teams’ but against Man United and Bristol we’re getting results.”

It’s fair to say if Durham are in the hat for the semifinal draw on Monday, everyone will forget any bad results that have gone before.