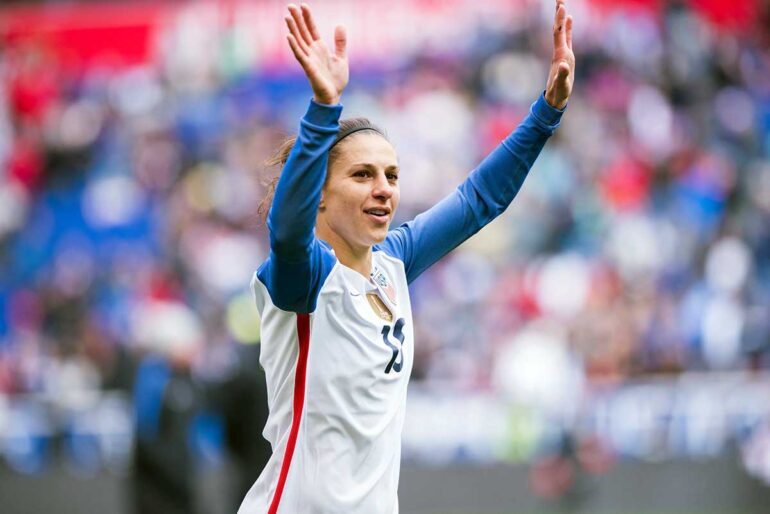 Carli Lloyd and Alex Morgan say 2018 has been a “successful” year for the United States after Jill Ellis’s side completed an unbeaten year with a 1-0 win in Scotland on Tuesday night.

Morgan’s first-half strike from close range was the difference on an evening where their hosts caused problems for the No.1-ranked side in the world, but Morgan’s volley from Mal Pugh’s cross sealed the victory.

“We’re happy to finish with a win,” said Morgan. “I don’t feel it was our strongest performance; at times we lacked creativity but on another note we got some players in on just their first or second camps and it’s for this team to grow and evolve and have that pool moving forward. Overall, there’s positivity around the team but it wasn’t our highest note.”

Lloyd, who played the majority of the match as the starting forward with Morgan playing from the left, said, “It’s been a really successful year for the team. Going undefeated is a credit to the coaching staff and all the players.

“We’re in a position now to start off in January against France and prepare for the World Cup. It’s going to be another tough year and obviously what we did in 2018 is great and amazing but what matters is 2019 and the World Cup.”

Morgan’s first-half strike took her recent record for her country to 25 goals in 26 matches and 18 in 2018 alone, also ensuring she’s now just two goals away from a century for the U.S.

While admitting she’s probably in the best form she’s ever been in for her country, Morgan also says playing out wide is helping her evolve as a player.

“I think this is my best play with the national team,” said the Orlando Pride forward. “But there’s some room for evolution. For example, tonight playing out wide I don’t think I’ve ever done it for a full game with this team. I did it at Lyon but it was great for me to feel that out and knowing Megan [Rapinoe] is our winger I want to be that number nine but I’ll do whatever’s asked of me.”

But after a long NWSL season and regular U.S commitments, Morgan admits she’s ready for a short break before returning to Europe to face France in January.

“My legs are flaming, I won’t be touching boots for a few weeks at least and then it’s just eyes on the World Cup. We had a strong showing in the qualifiers, not conceding a goal and not conceding in these games but there are still some steps to grow for this team in the next six months.”

Head coach Ellis admitted she was taking her team abroad more regularly now in order to prepare in as much detail as possible for next summer’s World Cup in France, with the trip to Portugal and Scotland the U.S.’s first matches outside of the country in 18 months.

“I’m a big believer in getting out of your comfort zone,” said Lloyd. “It’s easy at home because we’ve got thousands of fans cheering our names but on the road it’s difficult.

“Portugal knocked the ball around, they were organized and coming here I was really impressed by Scotland. The atmosphere and fans got them going and it’s exciting they’ve qualified. They’ll pose a lot of problems to other teams.”

On the differences of playing abroad, the Sky Blue midfielder added, “It’s a different climate. I got used to that in Manchester by wearing wet studs every single day! The pitch is out of your comfort zone, time changes, different culture, different food, different fans. It teaches you how to fight through some things and it was a great call by Jill and U.S. Soccer to allow us to come overseas.”

Morgan also echoed her teammate’s thoughts on their first trip abroad since two 1-0 wins against Sweden and Norway in the summer of 2017.

“This trip has been great,” said Morgan. “So many domestic games this year but these games challenged us. We expected to dominate Portugal a little bit more but I was really impressed with them.

“Scotland, we’ve played before but they had really crafty midfielders and now we go and play in France against France.”

And both players reserved praise for the effort Shelley Kerr’s side put up against the top team in the world with players such as Kim Little, Lisa Evans, and Emma Mitchell all missing from the starting lineup.

“I was impressed,” said Morgan. “They have sort of a direct play that’s easy to balance but their physical play was impressive and their ability to time their tackles well was good and maybe we weren’t 100 percent ready for that but we crept into the game and started to dominate the play.”

Lloyd added, “They were missing a few players like us but they did well and they’re definitely going to surprise some teams. That’s what we want though, there’s more teams and it’s great for the game.”