Jess Fishock on Lyon, Her Break from Football, and How Wales versus England “Broke Her Heart” 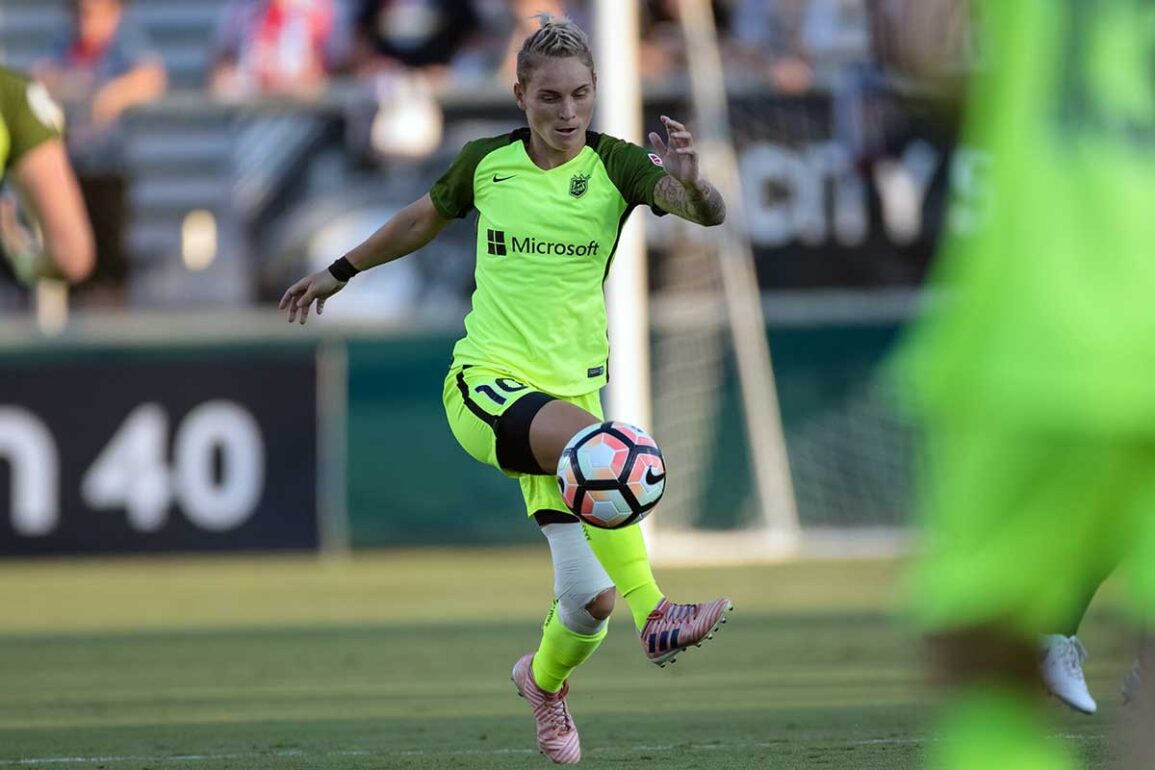 Jess Fishlock admits she was ready to take a break from football over the winter before being offered the chance to join European champions Olympique Lyon for the rest of the 2018–2019 season.

Fishlock has regularly spent the National Women’s Soccer League offseason playing in Australia for Melbourne Victory and more prominently Melbourne City, winning the W-League as both a player and player-manager on several occasions.

But after another grueling schedule that saw Wales end their World Cup qualifying campaign with heartbreak against England, the 31-year-old admits she knew a long time ago she was never going back to Australia this year.

“I decided as soon as the W-League ended last year I wasn’t going back,” Fishlock told Our Game Magazine. “Playing in the offseason for me was just something I didn’t want to do. I’ve won the league with City and Victory, I kind of feel like I don’t really have anything else to do over there.”

She added, “The league is growing and it gets better every year but I just thought, ‘Am I going to keep doing the same thing?’ It didn’t get boring but I was always in the same place, the same thing over and over again.”

Fishlock has to ask if her explanation makes sense, clearly at one with her decision which was made a long time ago, but keen to ensure her reasoning comes across.

“The girls knew I didn’t want to go back,” she added, though admits she did almost have a change of heart during the U.S. summer.

“Only because I’m such good friends with the girls. I’m so close with Steph [Catley], Lydia [Williams], Lou Lou [Lauren Barnes], and Stotty [Rebekah Stott]. It was going to be difficult to not play with them and Melbourne is beautiful.

“There was a moment I did make a couple of calls but I’d made a lot of commitments. I’d promised my family I’d come home for Christmas and I wasn’t prepared to compromise that. I said to Melbourne I’d need to have two to three weeks off and that’s not really helpful to anyone.”

After some careful thought, the Wales international realized she would have been backtracking on her decision for the wrong reasons.

“As much as I love the girls it wasn’t worth going back out there because I just enjoyed going to Australia with my friends. I put my professional head back on after slipping into being a normal human being and decided I wanted to have a break. Switch off from everything, rest, and just be a normal person for a couple of months I guess.”

But everything changed as the NWSL season came to a close. As Fishlock was preparing for another assault on the NWSL title with Seattle Reign reaching the end-of-season playoffs, a phone call from France threw Fishlock’s plans into turmoil.

“You get a call from a guy on behalf of Lyon and everything gets scrunched up and thrown in the bin because why wouldn’t you want to play for Lyon?” she said.

“We were trying to see if it could work. There’s so much that goes on with the NWSL, the FFF [French Football Federation], but we wanted to see if it was possible and initially it wasn’t.”

The NWSL final, should the Reign have reached it, would have meant Fishlock missed the French transfer deadline and the move would have fallen through.

“As soon as we realized that, we started talking less because in my mind we were going to get to that final, that was the plan,” she admitted. “We stopped communicating for a few weeks, we’d had every type of conversation with how it would work.

“We lost the semifinal so Lyon was back on the table. We had five days to figure out whether it could work between the leagues, how it would work et cetera. That in itself was one of the craziest times for me. It’s a very difficult process because I’m under contract and Seattle have my rights.

“It was important for me that whatever happened they still had my rights. I didn’t want to be in limbo where anybody could pick them up and I’m obliged to be part of their team, that’s not something I wanted, not something Seattle wanted, and that was made clear to Lyon.”

With such a short period of time to do the deal and Lyon keen to sign a midfielder, Fishlock admits she had no idea if the move was going to happen until the final day of the window; the time difference between France and the United States complicated matters (Fishlock never actually visiting Lyon until the deal was done).

“For a long time, it went from thinking we can do it to there’s no way we can do it, and then to maybe we could do it. The last day, it was an absolute scramble but I have to give a lot of credit to Lyon, their president, and Seattle. The NWSL were great in allowing it to happen the way it has happened but for a long time it almost didn’t happen. It was a complete whirlwind, I’ve never been involved in something so crazy.

“It was so difficult with the time difference. We were always behind and chasing the time because their window was in front obviously. It was very stressful but it got sorted eventually.”

The move now gives Fishlock her best chance yet of winning the biggest prize in European football — the UEFA Champions League.

The last time Fishlock spent the offseason in Europe was when she joined German side FFC Frankfurt in 2014–2015. The team did reach the final and won the tournament and despite having to return to Seattle early, the midfielder did get a medal, but admits this time she wants to do it her way.

“I had a great time at Frankfurt and the Champions League was brilliant,” she said. “Our draw was really good, but going through it I remember thinking there was nothing like playing in the Champions League. I just wish here [USA] there was a tournament like it that gives you that extra buzz, but there isn’t, that’s just the reality of it.

With the break Fishlock had intended to take months previous when she returned to the U.S. in the spring now out of the window, the 31-year-old does admit there were hesitations ahead of the move, largely off the back of Wales’ failed attempt to reach the World Cup for the first time.

Facing group rivals England in front of a packed-out Welsh crowd at the end of August, a win would have sent Fishlock and her teammates to France. But a 3-0 defeat didn’t just halt their dream, it ended it for at least four years after they missed out on a playoff spot, too.

Speaking candidly for the first time about the campaign, Fishlock, who this year passed 100 caps for her country, opens up about just how much the defeat and subsequent consequences affected her mind-set.

“That game was the worst timing really,” she admitted. “Even back in Seattle I was in a really bad place mentally with football. I really struggled. We played Portland that week and I was terrible, I really let Seattle down.

Fishlock isn’t in Wales’ camp at the moments and says she won’t be next month either as her planned break does at least extend to international duty.

She admits she hasn’t retired yet and does have an eye on the 2021 European Championships, set to be held in England, but wants to take her time before coming to a “final” decision on her future with Wales.

“My long-sighted eyes can see that the Euros is going to be home and we should have a better chance of qualifying than we ever did qualifying for the World Cup,” she said.

“Our campaign was phenomenal. From where we started to where we ended, and not one person can say otherwise. Nobody outside of our group will ever fully understand what that campaign took out of us as people.

“I know what Wales means to those girls. We lost to England who were fantastic, they absolutely deserved the win and I wish them the absolute best and I do really mean that.”

Going on to talk about the profound effect the defeat in Newport had on her personally, Fishlock says she hasn’t yet fully worked out the full extent the match has had on her, even more than a month later.

“It took something from me as a person, not just a footballer. That campaign took something and I have no idea what it is, I haven’t figured it out yet and I guess that’s why I’m not on camp now. I don’t want to rush my decision based on my emotional state. I don’t want to turn around and say I’m just going to retire because that might change and if it does, hopefully Jayne [Ludlow] and the girls will understand and they’ll understand why I’ve missed a few camps and give me a big hug!”

[dropcap]W[/dropcap]hile many people believed Fishlock might retire after the World Cup campaign, the midfielder clearly still has other ideas and while she hasn’t made any firm decision, it’s obvious the lure of a major tournament is keeping the passion burning.

“I believe this group can qualify for the Euros, I truly believe that,” she stated. “Why would I not want to be in the group that creates history? I have to be aware of what is happening for women’s football in Wales now and I have a duty to keep pushing that forward. I’ve done it my whole career and if I can play for my club what right do I have to turn my back on my country?”

She added, “I won’t rush the decision because I don’t want to make the wrong one. I’ve asked for the winter off and I do think it’s important we let our youth play a little bit. But I will have a decision to make and I don’t think I’ll really know how I feel until I’m on camp, that’s a bit of a Catch 22 situation.

“The way we finished that campaign broke my heart. It definitely took something away from me as a person that I don’t know how to fix or even if it is fixable — is this just what it is now? I don’t have the answer for that.

“I’m trying to figure it out and I believe that I will. My love for Wales is incomparable to anything else. I have a respect for Wales, for Jayne, for the group, and whether that plays a final part in my decision I don’t know, but maybe.”