Fara Williams on Younger Players Breaking into the England Squad 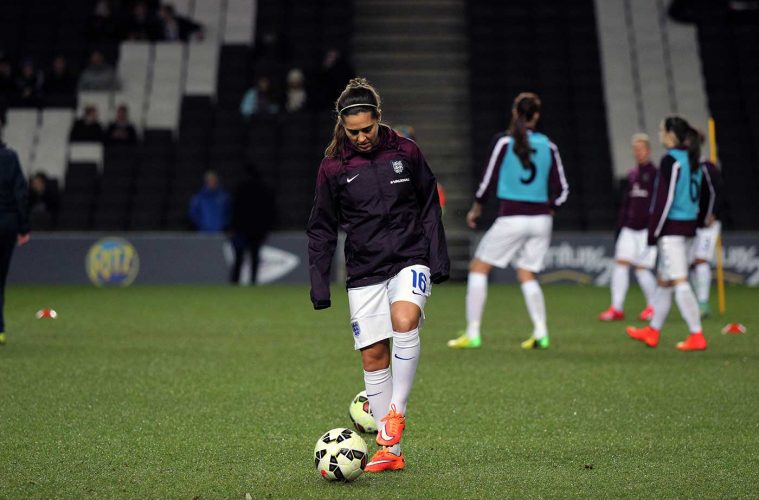 England’s all-time most capped footballer, Fara Williams, believes it’s getting harder and harder for young players to break into the Lionesses’ squad.

The rise of professional football and a growing pool of talented England players has seen the competition places increase as the 34-year-old looks forward to another set of games 17 years after making her debut.

“When I broke in at 17 or 18, it wasn’t professional,” said Williams. “The gap was really short between the teenagers and the senior players. Now the gap is harder for younger players because the seniors have been training full-time for a while.

“We talk about the young players but are they better than the players here now? Do we need to bring a 20-year-old in when we’ve got a Fran Kirby or a Jordan Nobbs who are playing really well and still young. Georgia [Stanway]’s really close, [Lauren] Hemp’s really close, [Lauren] Bruton at our club is an unbelievable player but I don’t pick the team,” before adding, laughing, “if I did they’d probably be here!”

Among the jovial nature of her point, there’s definitely an element of seriousness to what Williams is saying.

The Football Association announced a restructure last week which now sees the Under-20 and Under-23 national teams merge to create a new Under-21 side for the new batch of young players to train together as they prepare to make a play for the senior squad.

With the likes of Aoife Mannion, Sophie Baggaley, and so on, still struggling to find the step up despite impressive form, Williams believes it’s still difficult for younger players to make that step up, but praises the current crop of players coming through in her position.

“That’s why they’re here,” she said of players such as Lucy Staniforth. “Formation’s make or break players, players either fit into a style or they don’t. It’s about can you adapt from club to country and I think some players have struggled and that’s why people say the England squad stays the same but adapting from club to country, the tactical information is something players sometimes fall short with.”

Williams added, “But technically and tactically Lucy Staniforth and Georgia Stanway are unbelievable players. There’s some good players coming through, our Under-20s showed how good they were in the summer.”

The more immediate attention for Williams is on Saturday’s friendly against Brazil and Tuesday night’s game against Australia.

Should Williams feature in both she would reach her 170th cap for England but given she’s played a supporting role under Phil Neville since what she describes as a “nightmare” performance against Germany in the SheBelieves Cup, she’s realistic about her chances.

“I’ve only been in a couple of squads with him but Phil has been under Sir Alex and the standards I’m assuming he had there he’s drip-feeding here. Tracksuits at dinner, tidying things away, the small details he had at United he’s trying to bring into this environment. He wants us to play out from the back and be braver on the ball and he’s still implementing that.”

On reaching another mini-milestone in 170 caps, Williams said, “It would be nice but no different. I imagine if it happens they’ll be as a sub but representing your country is always good no matter what. It would be nice, I’m not saying it wouldn’t be, but I’d just like to play. I had a nightmare game against Germany and a nightmare in the semifinal of the Euros where my header set up my club teammate at the time!”

Williams is justifying her role in the squad thanks to her club, Reading, which she joined at the start of the 2017–2018 season.

After a difficult period at Arsenal, Williams joined the Royals after the European Championships and has been in stellar form playing back further up the pitch, regular contributing goals and assists and she sees no reason why she can’t still play a role in the squad despite her age.

“Why not? I’m a player that thinks club performances are the most important to be selected. Two years ago at Arsenal if you’d have asked me did I deserve to be in the squad off performances I’d have probably said no. But experience is why I was picked I think. Mark [Sampson] knew enough about me and what I’d done. Now I think I’m worthy based on performances at Reading.”

“A lot,” she said. “Not to say Arsenal didn’t help me but Reading have some fantastic coaches and I wish I’d met them eight years ago because I wonder what type of player I’d been. I’m 34 and still learning. They’ve put me higher up again. I used to play as a number 10 and as I understood football more I became a deeper player but it took away a lot of my creativity. I’m getting into the box a bit more and playing with more freedom, I think they’ve realized I still have the attributes to play higher up.”

With England set to come up against players like recently crowned FIFA Women’s Player of 2018 Marta and an ever-improving Australia side, Williams believes England still lack in overall technical ability compared to some of their rivals.

And the midfielder says England have to treat both games seriously despite their friendly status if they want to be the best prepared they can be for the upcoming World Cup in France next summer.

It will be the first major test England have had against top-ranked nations since the SheBelieves Cup in February and Williams is expecting two similar tests.

“I think they’re both quite similar actually” she said. “Both hard-working, maybe the Australians harder working, but both have brilliant individual skills in the team and we haven’t played opposition like this for a while. These are the teams we need to play to see where we’re at and see if we actually can compete with the best.

“We can’t treat it as a friendly, we have to go and play like we want to win.”