The Chronicles of Nairnia: Diana Matheson 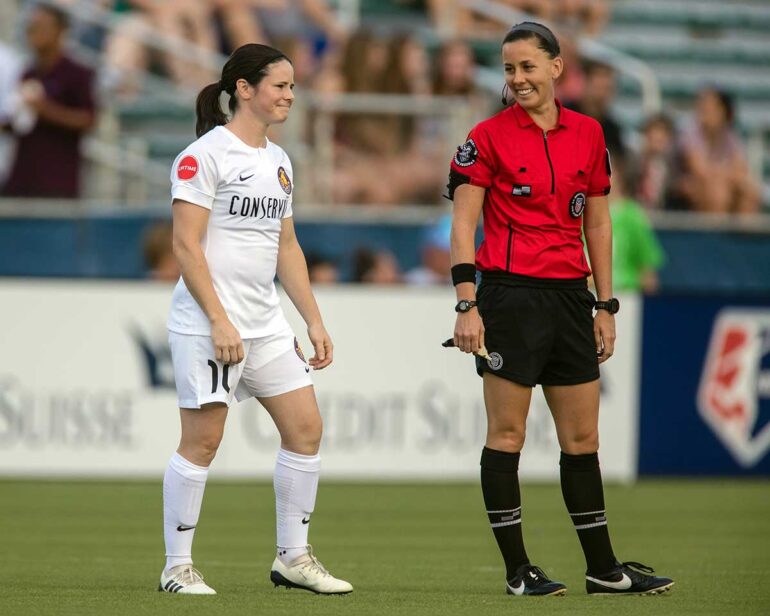 When you ask someone about Diana Matheson, you always get the same response: a little smile and giggle. Matheson is one of the best players I’ve played alongside with as well as genuine humans in the women’s game. She is incredibly smart, witty, unambiguous, and hard-working. There is a reason she has been a mainstay and legend within the NWSL and the Canadian Women’s National team. Here is a look into Diana’s mental approach through each of her “top setbacks” and why she isn’t slowing down any time soon.

Nairn: If you could have one gigantic billboard anywhere with anything on it, what would it say?

Matheson: It would change every day. I would have it rotate between a joke or a riddle or a quote. Give some commuters something interesting to look forward to to start their day.

Nairn: What book are you most likely to recommend to others and why? Or, what are three books that have strongly influenced your life?

Matheson: After going through a few injuries, the book I recommend more than any other is Resilience* by a former Navy Seal. It’s written as a series of letters to his former colleague and friend, and is just a really well-curated source of knowledge, drawing on different writers, thinkers, and athletes.

Nairn:   What is an unusual habit or an absurd thing that you love?

Matheson: Not that unusual, but I love a good crossword or a good puzzle.*

Matheson: The most successful people I know are those that are always learning and pushing themselves to be better, and the ones I admire most are those that leave a positive impact on those around them.

Nairn: How has a failure, or apparent failure, set you up for later success? Do you have a “favorite failure”?

I think this is true for two reasons: I think failures or obstacles always give the opportunity to learn and grow, because you’re forced into a new perspective and situation you otherwise wouldn’t have chosen for yourself. They also give a stronger-emotion driver behind what you’re doing because they can make you clearer on what exactly you want, or be willing to do more for it. The “top” setbacks that have shaped my career would be not making any of Canada’s youth national teams, not breaking into the previous two professional leagues in the U.S., losses in World Cups and Olympics with Canada (I can think of a few specific ones against the U.S.), and a handful of surgeries. I can’t say I have a favorite, but each one has shaped me.

Nairn: What advice would you give to your rookie-self?

Matheson: I would tell her to maybe to try and talk a bit more, like in general, to my teammates. I don’t think I spoke for my first three years on the national team.

Nairn: In late 2017, Utah Royals FC announced that they were taking the spot of FC Kansas City in the NWSL. How does this new franchise compare to other teams you’ve represented in the NWSL?

Matheson: In terms of the facilities, the mindset, and the professionalism of the club, Utah Royals FC is the best professional environment I’ve been a part of. The way the owner and the staff have gone about building the club from scratch, with a model that (at the least) matches the men’s program here, is exactly what every player in the NWSL hopes for when they sign with a team. Unfortunately, this isn’t the standard yet for every club in the NWSL, but with each club that has joined the league over the last few seasons, raising the bar higher and higher, hopefully it soon will be.

Nairn: In 2015, you tore your ACL and then again in camp with Canada in early 2016. Explain your journey back to the field and what it took to get back to the NWSL.

Matheson: I tore my ACL for the first time in my career seven months before the World Cup in Canada in 2015, so I pushed to come back from that one in time for the tournament (I also suffered a broken foot along the way). I then re-tore the same ACL in January of 2016.

After re-tearing it I took about six weeks to figure out what I wanted to do at that point in my career. Once I was decided on getting the surgery and continuing to play, the Canadian staff and I put together a full-year plan to rehab the knee, and to try and give myself the best chance of staying healthy through the closer-to-the-end-than-the-beginning part of my career. Laura and the Reign were great through all this, and I choose to do all my rehab in Seattle during the season so I wasn’t as isolated. After that, it was just a matter of staying true to the plan and the schedule and the milestones we set.  We didn’t rush anything and took extra time when it was needed because there was lots of time to get it right before next season.

That description maybe glossed over the tough days, and every player that has been though injuries knows that there are many of them, and lots of tough moments and frustrations and setbacks, but I was more equipped to deal with it in that point in my career than ever before. Previous injuries obviously gave me experience in the rehab process, but I learned (especially from 2015) to find the parts of the journey that you enjoy and emphasize those whenever you can, especially for longer recoveries. I had no interest in spending the season being miserable, and tried to put myself in the best position to still enjoy being a professional soccer player. (i.e., It’s a long season, and Reign away games meant I could go to the mountains with my parents, or maybe swing by Vegas once to watch Céline Dion). Likewise, if there are parts of process that are making you miserable, see what you can change, add, or eliminate.

This knee recovery was one of the “failures” that I’ve been proud of the way I went through, but it’s also always easier to look back on once you’re back on the field playing (shout-out to my teammates Mandy and Alex).

Nairn: As female professional athletes, we always have to be one step ahead of the game and plan ahead. You never know with injuries, league stability, etc., so what is next for you after soccer?

Matheson: I am still not 100% sure what my post-soccer career will look like. I know from listening to other retired athletes I’ve heard two things: Play as long as you can, and that it’s very hard to replace the passion and satisfaction that comes from playing a sport you love every day. I plan on listening to the first one and realize that there will likely be a hard transition time after.

I know for one part I will continue to work with Christine Sinclair, Karina LeBlanc, and Rhian Wilkinson as a part of a business we started in 2012 called iS4. We initially began by running soccer camps across Canada, and currently do speaking and workshops around topics like resilience and leadership.

I also know that I’ll end up in Toronto (where my family is), and that I would like to stay involved in sport in Canada. Other than that, I have a few things on my radar for my post-soccer career, including continuing to help build the players’ association for our national team in Canada, and to hopefully be a part of bringing an NWSL team to Toronto in the future!

In the meantime, I’ll continue to enjoy representing Utah Royals FC and Canada on the field every chance I get!

After tearing her ACL twice within a year, Matheson weighed her options and instead of throwing in the towel, made her recovery one of the failures she’s been proud of.

Injury will always be a part of the game. If there is one thing to take away form Diana Matheson: Control the things you can control — your reaction to a problem and your attitude toward your solution.