Managers and Teammates Pay Tribute to England’s Under-20 Success 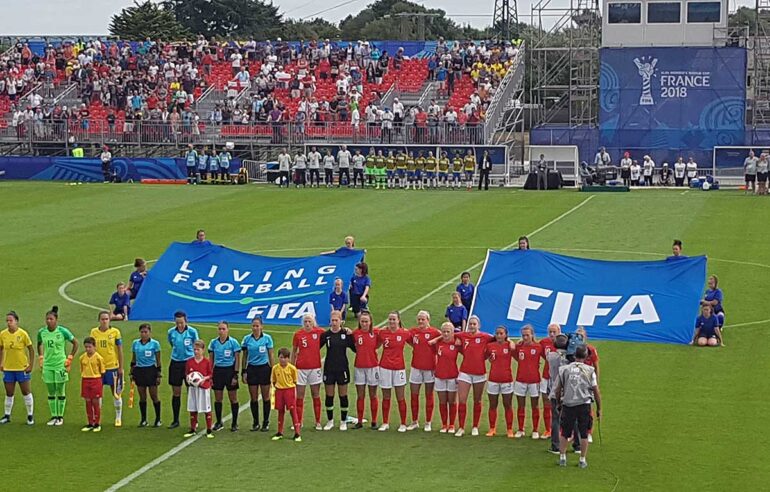 Three years on from the senior England women’s team coming from Canada with a World Cup bronze medal in a historic moment for the sport domestically, England’s Under-20 side repeated the feat by beating tournament hosts France in Vannes.

A tense penalty shootout finally saw midfielder Georgia Allen tuck away the winning spot kick, sparking celebrations which ended in all 21 players and staff, including head coach Mo Marley, with shiny bronze medals around their necks.

It was the best performance by any England side in the tournament’s history and despite going out in the semifinals to eventual champions Japan, the team has had a big impact on those watching back at home, including their managers, coaches, and teammates.

I was so excited for Mo,” said Lionesses head coach Phil Neville. “Mo’s been like my best friend for the last six months and she gets annoyed when I phone her because I phone her that often!

“We have a really good relationship, we trust each other, and I came and spent a few days with the players here before they went away.”

Neville is also keen to bring through some of the stars of France into his squad as soon as possible, but was advised the camp this month as England prepare to face Wales and Kazakhstan would be too early for players who are now in need of a rest.

“I told them I wanted three or four of them in the squad within the next twelve months. After they got through the group I sent them another message and there are definitely three or four players who went to France who will be in my squad in the next six months, no question about that. The obvious ones are [Lauren] Hemp and [Georgia] Stanway, who everyone is talking about, but there are other players in that squad that impressed me.

“When you get that kind of success and togetherness then they have to come through. I want to get that group through as quickly as possible, they have to grow and develop and that’s where Mo is so strong. I wanted to pick three or four on standby for this squad and she said there was a long run for them, let them come back down to earth but we need to get these players through.”

It wasn’t just the Lionesses’ boss who has been watching closely, senior players have also been keeping a close eye on past teammates who may soon become future teammates if Neville does indeed find a way to introduce players to his squad in the coming months.

Lucy Bronze and Jordan Nobbs both worked with Marley during their teenage years and were both part of the England squad that won the 2009 Under-19 European Championships in Belarus, a side coached by Marley at the time.

The pair have gone on to accumulate 110 senior caps between them in the time since, while current squad members Izzy Christiansen and Toni Duggan were also in the starting lineup for that year’s final.

“I tried to get over to the Mexico game but it was a bit far for me,” said right back Bronze. “I watched pretty much every game and it reminded me so much of the Under-19 group I came through with Mo. Myself, Jordan, Toni, Izzy, Jade [Moore], Gemma [Bonner], Lucy [Staniforth] — so many players from that team who have played for England.

“I feel like that team is the next big crop of England players. They got a bronze medal in a World Cup and nobody has done that apart from us so it stands us in good stead for a bright future. Some of my ex-teammates and a lot of these kids are really good and I’m excited I might to get to play with some of them in the future.”

Midfielder Nobbs was equally enthused about the team’s success and the possibility of several of the squad members making their way into the first team over the coming months and years.

“It was amazing,” said the 25-year-old. “I watched the game against Japan and they deserved to win but I’ve grown up with Mo and I know her way of thinking and her winning mentality.

“Obviously Georgia got a lot of goals which was great and was clever on the ball but I’m really proud of the team that we’re getting medals at that level. It just shows how exciting it is for our future. I always think major tournaments I went to at youth level improved me massively, so for them ticking those boxes will help them for the future.”

Aside from Stanway, both Ellie Roebuck and Esme Morgan were former teammates of Bronze’s at Manchester City and they’ve also been joined by summer recruit Hemp after an impressive year at Bristol City.

One player who will bear the fruits of such talented young players coming back into the City squad is young midfielder herself Keira Walsh.

At 21, Walsh is already a senior international but another in a long line of players who can put part of their development down to Marley, and Walsh couldn’t be happier for her team mates and former coach.

“I’ve watched a few of the games,” she said. “Hemp and Stanway were obviously on fire to say the least but I think it’s the little videos you see on Twitter of the girls, and you see how much they really get on.

“I played under Mo for a few years and she’s an excellent manager and it’s nothing more than she deserves.”

On top of the goals scored by both Stanway and Hemp, fellow forwards Chloe Kelly and Alessia Russo also played a big part in England’s success, with Russo’s coach at University of North Carolina Anson Dorrance telling Our Game he was “very proud” of Russo’s tournament.

And both manager Andy Spence and captain Danielle Turner are hoping Hinds, Kelly, and Finnigan come back full of confidence after their success.

“The girls have been brilliant,” said Spence. “They’ve been preparing for this for twelve to eighteen months and it’s been very full-on for them with club and country. They’re coming back with a bronze medal around their necks and those three players make us a stronger squad.”

Another manager with reason to be happy is Reading’s Kelly Chambers. As the Royals look to push on from an impressive fourth-place finish in the FA WSL last season, one of Chambers’ summer recruits was England’s starting left back at the tournament, Maz Pacheco.

And like everyone else, Chambers is delighted for both her new signing and the rest of the squad.

“For them, it’s been a fantastic tournament. It’s important to always look at who is coming through and especially with Maz for us. I’ve always liked her when we came up against her and she’s an exciting player who wants to learn.”

Chambers added, “I can’t wait to get her in and working with us. She’s had a great tournament and as have the rest of them. It’s nice to see actual youngsters at that age achieving things and pushing the women’s game even higher.”