Jitka Klimková: USA Can Leave with their “Heads Up” Despite Group-Stage Exit 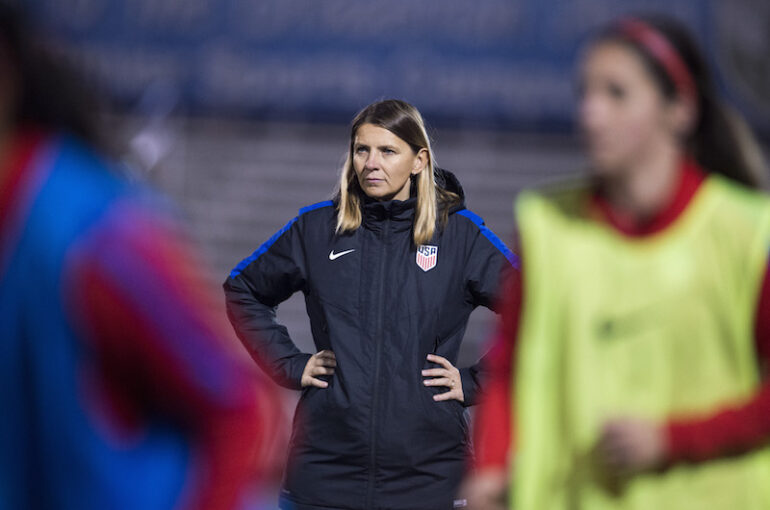 Seeing any United States team in the women’s game bow out of a tournament at the group stages classifies as a shock, but Jitka Klimková’s side very nearly recovered from an impossible position in a thrilling 2-2 match with Spain.

The U.S. trailed 2-0 at the break thanks to goals from Patri Guijarro and Lucía García, but goals within the final 10 minutes from Sophia Smith and Savannah DeMelo almost ensured the USA’s path to the quarterfinals in dramatic fashion.

But it wasn’t to be. Spain held on to go through along with Japan, and despite a disappointing early exit, Klimková sees reasons to be positive.

“It was a very close game,” said the head coach. “Spain were better first half, we were better in the second half. We were close to winning, we created a lot in the last 15 minutes but congratulations to Spain and Japan, although I would say we can be proud of the way we represented our country.”

In reality, the U.S. lost the match in a tough 45 minutes in which Spain imposed their game plan on the U.S. better than they had managed against their European opponents.

The U.S. tried to press Spain but their ease on the ball meant they could play through the lines and consistently attack.

Eva Navarro, in particular, seemed to have a lot of luck down the Spain left against Kiara Pickett, but it will be individual errors that leave Klimková wondering what might have been.

First it was Jaelin Howell, usually so reliable for her team, who gifted Spain their opener. Howell was all set to clear a cross into the box but mishit her attempt straight to Barcelona star Guijarro on the edge of the box, the worst possible player to gift an opportunity to.

Guijarro promptly did the rest and sent Spain into a lead which only gave them more confidence to go on the forefront.

The U.S. did grow back into the game, Sophia Smith in particular linking well up top but it was UCLA’s Viviana Villacorta who came closest to leveling the match, only to be denied by a stunning save from Catalina Coll.

Erin Gilroy also hit an effort just wide and then another error before halftime gave the U.S. a huge mountain to climb.

It was another cross into the box that wasn’t cleared properly and while García’s effort was hit with power, Laurel Ivory will be disappointed she allowed the ball to squirm out of her grasp and over the line.

Regarding the poor defending during the first half, Klimková believes it took the team too long to hit their rhythm throughout the tournament.

“It took us a while in this tournament to play our style from the beginning, it took us a little bit longer to really find ourselves in both defense and attack. If we started the same way as we did in the second half, I think we would have won this game.”

Ashley Sanchez had to clear a Guijarro effort off the line to stop it going to 3-0 before she was replaced by the lively Abigail Kim at halftime.

The substitution seemed to pay dividends, Kim’s pace up and down the right wing caused Spain issues and pinned the team back in defense, but it took too long for the breakthrough to come.

Smith herself missed an incredible chance to get back in the game earlier when she headed over from six yards.

But it was also Smith who provided the spark, hammering home a free kick in the 83rd minute to make it 2-1 and set up a nervy finale.

And while Smith will now be heading back with the rest of the team, Klimková was full of praise for her No. 9.

“She made huge improvement during her journey with the U-20 team. In her first tournament in La Manga she scored five goals and was the youngest player in this team. She can combine, she can create chances for others, and this is something that is very promising for the future of U.S. Soccer.”

Despite still needing two to qualify at the expense of Spain, their opposition began to make sloppy decisions, slashing at clearances and beginning to panic on the ball as the clock ticked down.

That feeling wasn’t aided when Savannah DeMelo’s heavily deflected effort from outside the area beat Coll and brought the score back to 2-2.

The U.S. put plenty of pressure on as the game moved into added time but it was Spain who missed an incredible chance to wrap the match up.

Ivory’s pass out from the back could only find substitute Candela Andújar, but the forward’s effort rolled past the post when it looked impossible to miss.

Fortunately for Spain, the miss didn’t come back to bite them and it was indeed Pedro Lopez’s side who progressed at the expense of the U.S.

But Klimková was still proud of how her team reacted under difficult circumstances.

“We all agreed at halftime we could still win the game” she said. “Our mentality is our biggest strength. Those players never give up and you could see that second half. We pushed, we believed. and we can leave here with our heads up.”